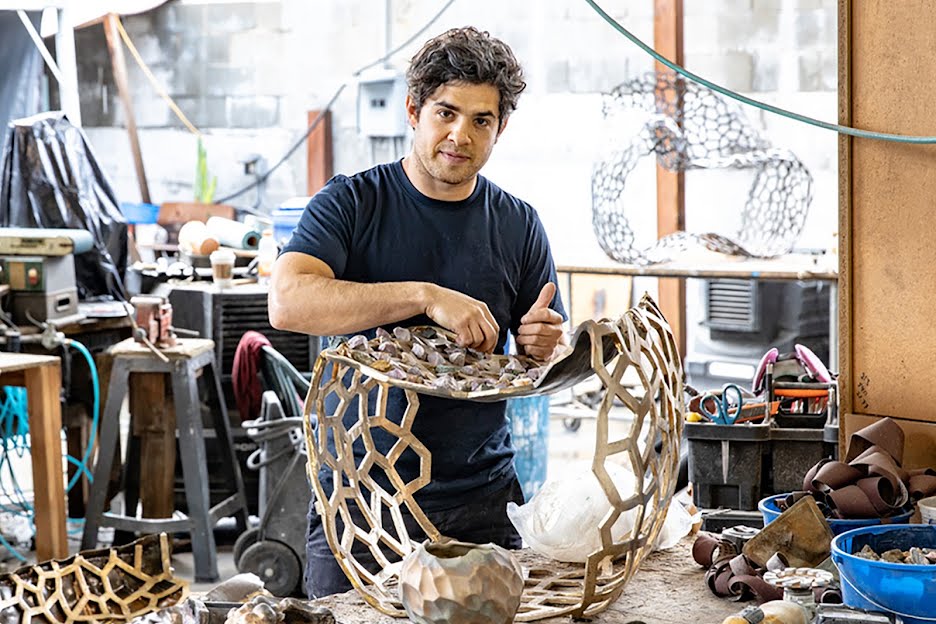 Los Angeles-based artist David Wiseman 03 FD thrives on taking chances in his work. After shaking things up in the worlds of furniture and lighting design for the past decade and a half, he is now showing new pieces at Kasmin Gallery in NYC in a solo exhibition called Plants, Minerals and Animals that opens on March 14.

“A gallery show allows me to summarize all the new ideas I’ve been exploring,” says Wiseman, “to take a step back from commissions, look back at 15 years… and create a unified, cohesive statement.”

Everything Wiseman creates—from bronze-cast lighting fixtures to room installations to ornate tables in bronze and terrazzo—is inspired by natural forms, blurring the boundaries between fine art and design. “David is an unbelievably talented artist, highly intelligent—a master craftsman,” says gallerist Paul Kasmin. “The upcoming exhibition will surprise and delight even those who know his work well.”

Wiseman’s creative journey began at RISD, where he first encountered 3D design and realized that his drawings “wanted to become objects, wanted to become part of this world. I used furniture as an opportunity to engage in my world of drawing and as a way of making my drawings relevant to this world,” he explains.

The objects Wiseman created got larger and larger, until he was covering whole ceilings in ornate porcelain cherry blossoms and combining metals, glass and porcelain to create spectacular lighting fixtures (including one on view at the President’s House at RISD) that bring serene woodland scenes indoors. Collectors and public institutions around the world have commissioned custom work, and his pieces have been acquired by numerous museums including the Los Angeles County Museum of Art (home to his Radial Branch Chandelier), the Corning Museum of Glass and the RISD Museum.

Wiseman recently teamed up with his brother Ari to step away from traditional artist-dealer relationships and establish an independent design studio dedicated to his work. “It’s the biggest thrill to steer our own ship,” he noted in a recent article in Architectural Digest. The brothers are currently overseeing renovations on a huge studio and showroom in LA’s Frogtown neighborhood, where Wiseman will continue to explore new territory, like wallpaper design.

But leading up to his NYC show, he has had his nose to the grindstone and his hand on his torch. “I need to be really close to the work right now,” he said last month. “There’s no sleep until Kasmin.”

Designing for the Home

After completing a recent commission for Lexus, Furniture Design grad student Tim Miller MFA 19 FD reflects on the project and considers what's next.