A Better Place to Learn

How does an architect with no experience designing schools end up transforming a city’s first new school in 25 years? And changing the national conversation about design for education in the process? ForJo Ann Secor 73 AE, it all started at a trade expo in 2008, when a stranger from Wyoming wandered into the Lee H. 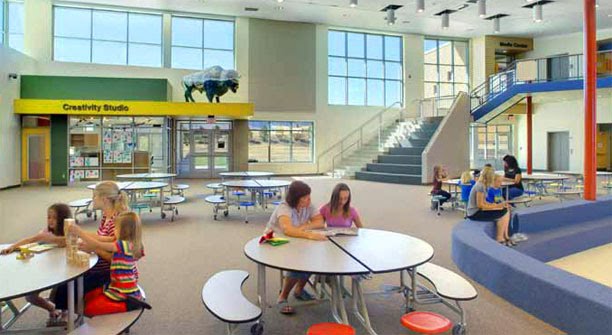 How does an architect with no experience designing schools end up transforming a city’s first new school in 25 years? And changing the national conversation about design for education in the process? ForJo Ann Secor 73 AE, it all started at a trade expo in 2008, when a stranger from Wyoming wandered into the Lee H. Skolnick Architecture + Design Partnership (LHSA+DP) booth and started talking – about informal learning spaces, among other things.

The man was Kelly Eastes, chief public relations officer of the Natrona County School District in Casper, WY. Eastes was there on a lark, looking for a radically different point of view about how to build a school. “I wanted a school that didn’t feel like a prison,” he says, recalling the chance meeting. “Schools need to be places that adults and kids both can’t wait to get to in the morning. Too often, you can’t tell the difference between a school and a prison, other than the razor wire.” As he roamed the trade show aisles, “I walked by Jo Ann’s booth and I just got sucked in there. We ended up spending three hours together talking about the way schools should be.”

Three years later, in August 2010,Summit Elementary School opened its doors. And when it did, there wasn’t a maze-like hallway or box-shaped classroom to be found. Instead, students, teachers, staff and parents walked into a dynamic, continuously flowing environment informed by Secor’s years of award-winning work designing museums, discovery centers and cultural sites for children and adults.

The $16.6-million school, which came in under budget, features moveable walls, a cross-disciplinary creativity suite with a science lab and art studio, and an expansive village center that doubles as a public event space for the city. Soon, computer kiosks at the school will allow students to study data generated by Summit’s new wind turbines, and even send excess power produced by the turbines to another part of the state.

“This is not the old notion of ‘Here is a school building: We drop our kids off, something happens to them there, and then we pick them up,’ ” says Secor, a principal and director of museum services at LHSA+DP, which invited the entire school community to participate in the design process through a series of charrettes. “This is the anti-double-loaded corridor school. It’s really taking the fundamental ways in which we learn in museums and the whole idea of informal learning, and integrating that into a formal learning environment, making children have ownership over their own learning.”

LHSA+DP, the Manhattan-based firm Secor’s husband, Lee Skolnick, founded in 1980, has designed acclaimed projects from the Sony Wonder Technology Lab in Times Square to the Muhammad Ali Center in Louisville, KY. With Summit Elementary, their work has been drawing national attention, with education officials from other states touring the school and innovation advocates like Edutopia, the George Lucas Educational Foundation’s website, taking notice.

Eastes says the stars must have been aligned for Secor’s firm to take on the project: Despite a project filled with bureaucratic hurdles, all the traditional obstacles seemed to melt away. When state regulations mandated that the winning bidder be a firm with previous experience building schools, Secor’s firm quickly partnered with a Colorado firm receptive to LHSA+DP’s process. When the state said it could not fund the pre-school that stakeholders believed was central to their educational model, philanthropists in the charrette group fronted $1 million on the spot to get it built.

In retrospect, Secor says, the stars might have aligned in more ways than one. Just prior to getting the contract for Summit Elementary, LHSA+DP had completed a 114-acre educational campus and retreat destination in Ohio for business leaders and entrepreneurs. “This was a place that embraced out-of-the-box thinking, taking risks and the idea that entrepreneurs are really dreamers,” Secor says. “In a way, Summit was the next step from that. It’s like a place for really young entrepreneurs – for kids to dream big.”