A Call for Creative Activism 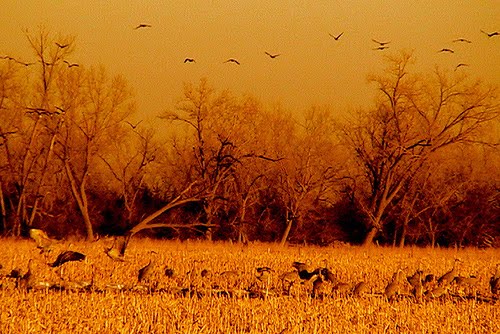 While visiting RISD, Allison Adelle Hedge Coke pointed to sandhill cranes as a model for leadership and collective action.

“In an indigenous worldview everything is connected,” said poet Allison Adelle Hedge Coke in an inspiring talk about contemplation, creative practice and activism. The award-winning author and environmental activist came to campus as part of RISD’s Social Equity and Inclusion (SEI) initiative, offering a spoken word presentation on Monday, April 19, followed by a workshop on activism in the arts on Tuesday.

In introducing the indigenous rights activist, Literary Arts and Studies Department Head Nicole Merola praised her ability to bring together “human and more-than-human voices from particular places and traditions” in her powerful critiques of colonization and ecological injustices. A distinguished professor of creative writing at the University of California/Riverside, she connects the years of protests at Standing Rock to a longer history of confrontations between First Nations peoples and those aiming to appropriate indigenous lands for oil.

“This is what we’ve come to in the colonial mad world,” Hedge Coke laments, “all for oil, for a pipe that will eventually deteriorate and leak, ruining water forever, for millions.” Seamlessly weaving the work of several writers into her own critical narrative and drawing largely from her 2017 essay Streaming, she punctuated fluid passages of prose with the refrain “water is life,” clearly declaring what’s at stake. In proposing sustainable models for activism, the poet points to how sandhill cranes organize behind a self-appointed leader: “if the others trust this leadership, they will lean behind it in the same direction until together they will lift.”

Throughout her talk Hedge Coke emphasized the importance of artists connecting to one another and with the world around them. “Everything around us [is] material to the art. This allows us to cope in ways that other individuals might not be able to.” She calls for large-scale reforms such as the return of indigenous lands to the First Nations and for smaller-scale changes in how people approach their everyday lives.

“Seek creative ways to balance innovation and activism,” the poet said in closing her talk, “while being engaged and fully conscious in all that we do, holding dear to the fact that we certainly have a part in this to be useful.”

During the Q+A that followed, Hedge Coke expanded on her belief that writers and artists can best affect change collectively. “There’s so much work to do in the world today, so we need each other,” she said. “We have to identify our shared concerns and stand behind one another.”

Visualizing the Environment through Comics

For a new class in Literary Arts and Studies, students are exploring—and making—sequential art that challenges how we understand the natural world.

Learning on a Lakota Reservation