A Charette of Historic Proportions

All undergraduate and graduate students in Interior Architecture threw themselves into an intensive design competition to reimagine a space for the RI Historical Society. 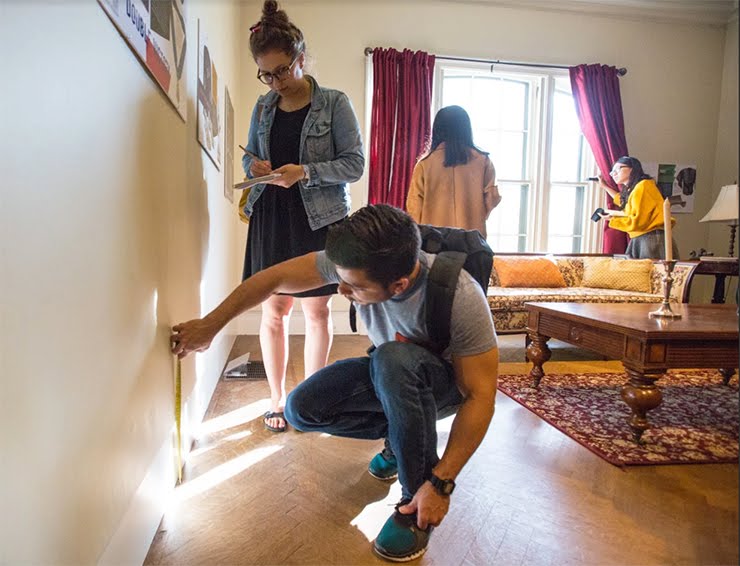 Each year faculty members in Interior Architecture surface a real-world design project for an intensive, department-wide charette—a five-day competition in which teams of students work together to solve a single architectural challenge. This year the Rhode Island Historical Society (RIHS) provided a design problem perfectly aligned with the department’s focus on adaptive reuse: reimagining a small study in its historic, Federal-style Nelson W. Aldrich House on College Hill.

As RIHS Executive Director C. Morgan Grefe explained at the charette kickoff in late October, the house was built in 1821 and is listed on the US National Register of Historic Places. Used as both a history learning lab and a space for rotating exhibitions, the 15x23-foot room in question is also rented out on occasion for private functions such as weddings.

“Your proposals should respect the room’s history while embracing the cutting edge,” urged Critic Elizabeth Debs, who organized this year’s charette. “You’ll be folding history and heritage into a contemporary understanding of a multipurpose space.”

Since the room to be repurposed was last renovated in the 1970s, many of its original architectural features—including a fireplace, a doorway and one of two windows—have been ripped out or covered in sheet rock. Grefe noted that she would be happy to see the 1970s track lighting removed but is rather attached to the herringbone-patterned wooden floor.

Working in 14 predetermined teams—each including one faculty advisor and at least one grad student—students were given just over four days to collaborate on a design and make two 24x36-inch display boards and at least one model to articulate their ideas. They then submitted materials anonymously to a team of judges (including faculty members and representatives from RIHS) that reviewed the proposals and voted for the most promising solutions.

“We intentionally created teams that allow grads and undergrads as well as students from different years to work together,” Debs notes. “It helps to build community in the department.”

Contemporary solutions
After a frenzied four days of collaborative brainstorming and late nights working in the studio, every team had submitted its proposal and the judges selected first-, second- and third-place designs. Called The Skin, the winning design proposes an edgy architectural solution that completely protects the original room through a curved second ceiling built from thin, corrugated wood with slits cut out to allow diffused light to enter the space. A wall of glass and wood shelving and cabinetry allows for storing and exhibiting objects. Panels made of the same material as the ceiling roll up and down via a simple mechanical device as a way of covering the wall shelving and its contents for special events.

“We also opened the doorway leading to the other parlor and inserted a sliding door,” says team member Nora Shen 18 IA. “And we removed the track lighting and replaced it with modern LEDs.”

The teams that took second and third place both focused on custom-made, adaptable furniture pieces that would serve both the learning lab and the exhibition functions. Heritage Re-Animated uncovers the room’s lost window and opens the blocked door. “Our approach was to bring the room back to its original form,” explains team member Ana Morataya Quan MDes 17. “We also made connections between doorways and windows that dictate the shapes of the pieces we created as well as the circulation of the room.”

The design features vertical and horizontal shelving, lockable draws and cabinets and pull-out benches that store books and utilize marble from the original fireplace (which is still stored in the Aldrich House basement) as ballast and a footrest. A rolling exhibition wall features a moveable projection screen and multiple tabletops that adjust to different heights.

The third-place winner, Threefold, makes use of similar flexible furnishings and incorporates ultra-modern smart glass that can change from transparent to frosted with the click of a switch. “Our team really gelled,” notes Toban Shadlyn MDes 17. “We all felt free to present our own ideas and to challenge ideas that weren’t working. And the group generated great energy.”

Students who worked on all three winning designs showed their work at a Providence Preservation Society meeting on Friday, November 4. Later in November they’ll also exhibit their proposals in the very room they redesigned in the Aldrich House. If the Historical Society lands grant funding for the project, the nonprofit hopes to implement one of the three designs or perhaps a single design that uses elements from multiple proposals.

All 95 undergraduate and graduate student in Interior Architecture collaborated on this year’s five-day charette, a challenge to design a better classroom for young children with autism.