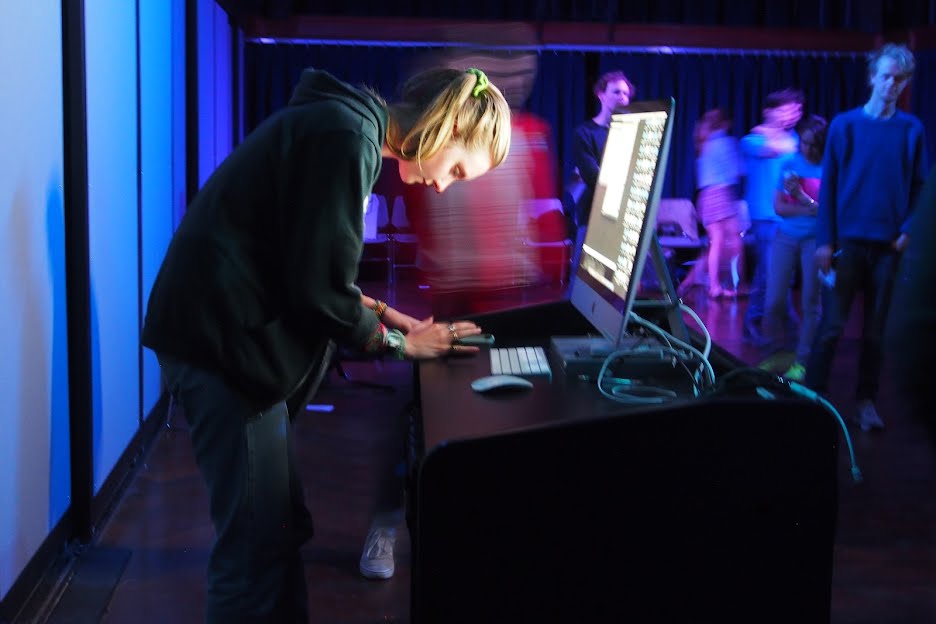 As participants in last spring’s Spatial Audio studio paced purposefully around a space that once housed RISD’s library, a voice emanated from the eight speakers mounted along the mezzanine. It incanted an apt mantra: “one no longer hears the sound/one finds oneself literally in the heart.”

Moving from speaker to speaker, the couplet repeated, reverberated, combined and recombined with increasingly abstracted intonations of the same phrase, enveloping students as they listened intently, eyes closed. For 30 seconds, the words doubled as an audible caption to the activity they inspired.

The absence of critical looking—and of things to be looked at­—in a RISD studio space stands out. In fact, the work students made for Spatial Audio hints at new possibilities for sonic experimentation at RISD, thanks in part to a state-of-the-art sound system that has transformed the repurposed library space.

The irony is that “when they took the books out, it [initially] became a terrible, terrible-sounding room,” says Experimental and Foundation Studies Programs Head Shawn Greenlee 96 PR, who teaches Spatial Audio and is one of the driving forces behind establishing more sound art and studies on campus. A composer and member of the noise collectives Landed (which he founded with Joel Kyack 95 PR and Dan St. Jacques) and Dos Mega (also with fellow alum Kyack), he worked with Dylan Costa in the Media Resource Center, Ned Draper in Academic Affairs and an outside acoustics expert to acquire eight “top of the line” speakers and two subwoofers from Meyer Sound to build a networked multichannel sound system that makes possible an array of innovative aural projects.

“It’s been a personal quest of mine to make a space for sound studies at RISD,” says Greenlee, who notes that the rising popularity of augmented and virtual reality has increased interest and opportunity in sound design. He credits Provost Pradeep Sharma with recognizing the need and suggesting the untapped potential of the former library to become a sonic “performance lab.” Now artists can arrange and send sounds from a digital audio workstation (DAW) to any of the eight distinct channels in the space over a single Ethernet cable, a configuration that could make adding even more channels possible in the space and elsewhere on the RISD network.

Since the sound system was installed last Wintersession, it has allowed for sonic exploration courses like Spatial Audio and Geoff Mullen’s Sound Arts as well as presentations by experimental artists Maria Chavez and Lesley Flanigan. Greenlee has also organized Sonic Interaction and Experience (SIX), a research group of RISD and Brown University grad students that spent the past year exploring the new performance lab’s capabilities; this fall the research group will be offered as a Digital + Media course titled Sonic Practices.

In Spatial Audio students not only explored the potential of the new multichannel sound system, they also learned about a history of music “that intersects with the visual arts and design throughout the 20th century,” Greenlee says. Final projects were informed by various movements in sound art, from spatial sound creation and musique concrete to experimental composers like John Cage.

Greenlee, who is participating in this year’s Cube Fest multichannel music festival at Virginia Tech (where he participated in a multichannel music workshop last summer), still thinks fondly of the fertile music scene that emerged from RISD and coalesced around the Fort Thunder performance space in the 1990s. With bands like Landed, Lightning Bolt, Black Dice, Les Savy Fav and others forming here before making names for themselves internationally, RISD is already known for pushing the possibilities of sound along with innovation in art and design.

“It’s interesting to think of what would happen if all of those people were students now,” Greenlee says. “We might not see as many bands as we used to, but students are still really interested in sonic practices.”

Moving forward, Greenlee foresees interest in the new space coming from industrial designers interested in designing instruments or making new interfaces for musical expression, filmmakers looking to explore sound more explicitly in their work and fine artists seeking to add an audio-performance dimension to installations, among many others. The sound system-and the possibilities for teaching, learning and making that it signals-is a crucial step in “connecting what we know students are already up to” with supporting RISD’s next wave of sonic innovators.

Making a Show from Scratch

From acting to making music, costumes and artwork, students in this year’s Theater Production Workshop are going all out to bring an original performance to life this week.

Under the Great Wide Open