A Summer of Art + Tech

Through a four-week internship at the Brooklyn experimental studio Eyebeam, Zak Ziebell BRDD 19 PT gained invaluable professional experience at the intersection of technology and fine art. 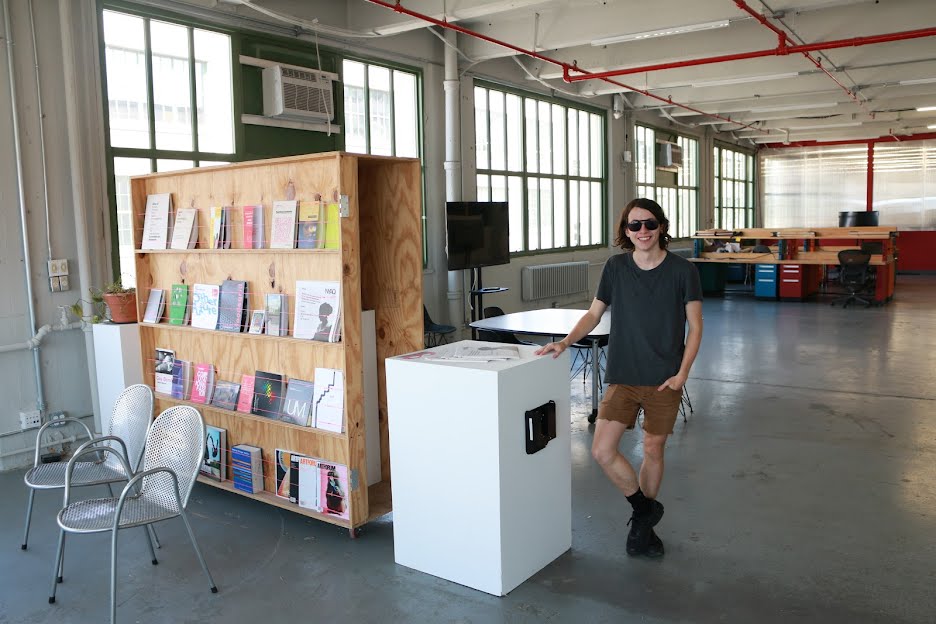 For Brown|RISD Dual Degree candidate Zak Ziebell BRDD 19 PT, it took just a few amazing weeks for his admiration of Eyebeam to grow into a deep commitment to the institution and what it represents. Even though some of his responsibilities as a summer intern at the Brooklyn-based experimental technology studio were routine, he reveled in the opportunity to discover the work of artists associated with Eyebeam-discoveries that show “what kind of work is possible” at the intersection of fine art and technology.

Ziebell, who is focusing on computer science and philosophy at Brown and majoring in Painting at RISD, learned of Eyebeam while researching artists he admires—people like Brenna Murphy, Trevor Paglen and Brad Troemel who employ digital techniques to make work that comments on contemporary society. When he realized that many of these artists have participated in residency programs at Eyebeam, he contacted the studio to see if he could intern there this summer. Before long, he was working closely with Eyebeam communications manager and dual degree alum David Borgonjon BRDD 14 PT.

“David being a fellow [Brown|RISD] alum was a big part of my decision to intern at Eyebeam—to see what someone from the program is doing in a ‘real-world’ context,” says Ziebell. A native of San Antonio, he enjoyed meeting people active in NYC’s tech-art scene while getting an inside look at day-to-day operations at a fine arts nonprofit. Borgonjon introduced him to interesting art events in the city, including a panel discussion on virtual reality at MoMA featuring New York Times Metro photo editor Niko Koppel, a former Eyebeam resident artist.

Ziebell explains that ever since his first year at RISD he has been paying closer attention to artists working at the intersection of art and technology, thanks in part to inspiration from Experimental and Foundation Studies faculty member Mimi Cabell. This summer he has been excited “to see work [by these artists] in the real, material world” rather than just online. He also found that the computer skills he has honed as an artist who incorporates coding into his painting practice came in handy in the work he did to enhance Eyebeam’s visibility and online messaging. During his internship, the artist also helped review Eyebeam’s impact on social media and contributed to its recently-launched Stop Work! blog—a responsibility he took very seriously.

Writing for Eyebeam’s social media platforms proved to be especially challenging, Ziebell says, since he was given a remarkable amount of autonomy and creative freedom but knew he was representing the organization publicly and wanted to do it right. He also found it exciting to meet artists making technologically-integrated art in NYC. “As someone who comes from a place that’s not like New York, it was cool to experience the city,” he says, adding that he loved catching up with friends from high school who were also interning in NYC this summer.

“I know for sure I’ll be involved with an organization like [Eyebeam] someday,” affirms Ziebell, whose four-week “condensed” communications internship helped increase his own confidence in “launching” himself into a world of innovative making.

Victims of human trafficking in Louisville, KY are benefiting from life-changing opportunities made possible through an innovative startup called Anchal.

Hoping to make a positive impact on the community, videographer Tara Gupta 18 FAV jumped at the opportunity to work with Farm Fresh Rhode Island this summer.

Through a summer internship at Boston Children’s Hospital, Yuko Okabe 17 IL is helping to develop a biofeedback game for kids struggling with emotional and behavioral issues.