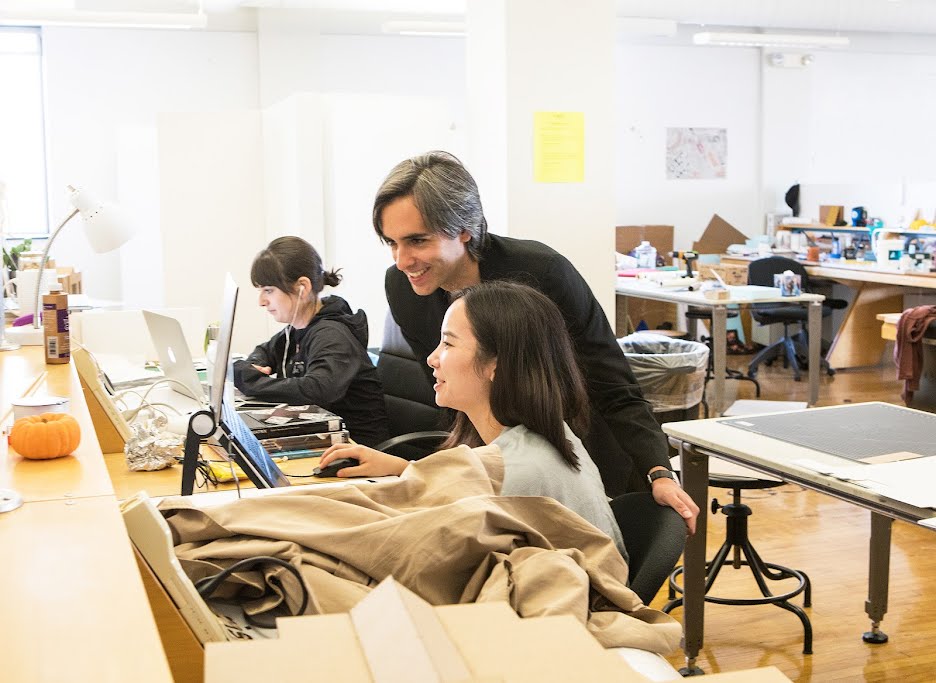 Italian architect Stefano Corbo studied architectural design in Spain and has taught in Germany, Lebanon, China and Australia. But his new position as assistant professor of Interior Architecture at RISD is his first time teaching in the US. “I wanted to experience the American academic system and was interested in RISD’s program because adaptive reuse has always been the focus of my research and my teaching,” he says.

Corbo is working with graduate students en route to earning a Master of Design (MDes) in Adaptive Reuse and says that he’s both teaching and learning from them. Like the field of architecture itself, he explains, studying architecture “is a collective process—a sharing of values and ideas.”

Since students in Corbo’s Advanced Design Studio come from all over the world, they bring diverse backgrounds and perspectives to group discussions and critiques. With undergraduate degrees in everything from biology to history to psychology, each student preserves his or her own unique background, Corbo notes, “but works well with the rest of the group, always absorbing input and dealing with external constraints.”

Corbo’s assignments begin with site analysis. “You need to be familiar with the context of any socially engaged project before you can contribute your own personal ideas,” he explains. “That is the first step.” From there, he encourages students to articulate their point of view and consider scale, rhythm and composition as they bring their projects to fruition. “The ultimate goal of adaptive reuse projects is to fuse the contemporary language of design with the traditional language of the existing structure,” he points out.

Corbo plans to travel across the US during Wintersession and will teach one studio and two theoretical courses in the spring, sharing with students his research interests in contemporary culture. In 2012 he launched SCSTUDIO, his own multidisciplinary firm, to focus on public installations and buildings such as theaters, cultural centers and museums. He takes a “socially and politically engaged approach to each site and building,” offering a personal response to the “cultural, political and economic constraints” inherent in each project. Several have won design competitions in Europe, which help “keep the studio working,” he says.

In Il Tappeto di Pietra, Corbo collaborated with Spanish and Italian designers in envisioning an outdoor market for the ancient city of Vidigulfo in northern Italy. “Our proposal focused on nostalgia and metaphysical visual communication,” he says. Creating physical continuity by using traditional materials such as stone, red brick and marble, the team was able to manifest a contemporary interpretation of the site and “enact a new urban space to create a collective, communal experience.”

Graduate students in Interior Architecture focus their growing expertise in adaptive reuse on the needs of RISD’s campus.

Elevating the Conversation in Columbus