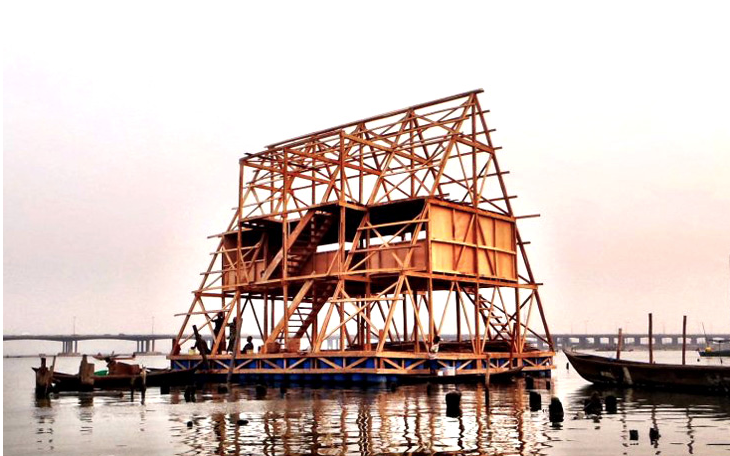 On Monday, April 3, a large crowd of students and faculty members gathered for the Architecture department’s first installment of the Wilbur E. Yoder Architecture and Technology Lecture Series, named in honor of the influential professor emeritus who retired in 2014 after teaching at RISD for 50 years.

As founder of the international firm NLÉ, Adeyemi focuses on shaping the architecture of developing cities in Africa, encouraging people around him to “think, build and live differently.” He spoke about the effects of climate change and urbanization on huge cities like Lagos (Nigeria) and Dakar (Senegal) and the importance of learning from local people when seeking solutions to design problems.

Adeyemi and his team did just that when designing the Makoko Floating School in Lagos in 2012. He described Makoko as essentially a floating slum that is home to more than 100,000 adaptive and resilient people—a kind of testing ground for responding to flooding and other climate change-related conditions.

Local carpenters built the floating school, which was funded in part by the United Nations Development Program, of recycled plastic barrels, local wood and bamboo. It featured solar panels, compost toilets and a natural ventilation system and was in use for several years until its (much publicized) collapse in 2016. NLÉ subsequently made improvements to the design for MFS II (see video, above), which was exhibited at last year’s Venice Biennale, and is currently working on a third iteration to be constructed in Bruges.

“There is no secret recipe for success,” Adeyemi told students. “Building trust within the community is a fundamental part of the process every time… and failures [along the way] should not stop you.”

Amy Kulper, newly appointed head of the Architecture department, looks forward to collaborating with colleagues and building on RISD’s strengths.

Designing a School for the Arts

Students in an advanced architecture studio are exploring how highly specialized programming informs a building’s form and material character.