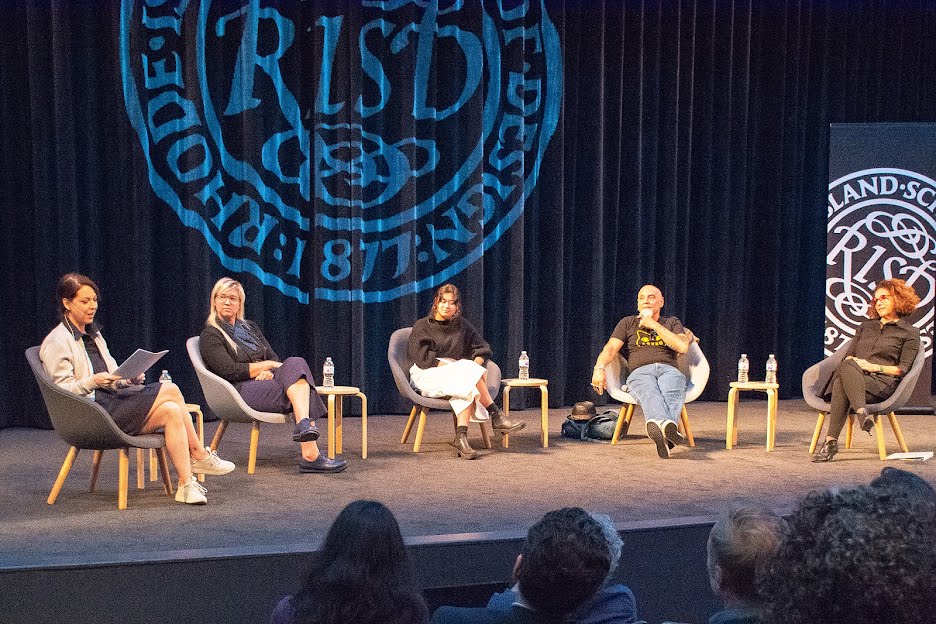 As people around the world face increasingly complex and challenging problems—from climate change to income disparity to multiple refugee crises—the need for creative problem solving has become ever more apparent. Yet few people actually see themselves as creative, and the myth that some are born with creative talents and others are not persists.

Designer Amy Devers MFA 01 FD, co-host of the podcast Clever, led a panel discussion at RISD on September 19 that dispels that notion and posits instead that creativity is a mindset that each of us can strengthen with encouragement and training.

“Supporting Rhode Island’s capacity for creativity and growth has always been a central part of RISD’s mission,” Somerson noted in her opening remarks. “RISD is a place to address complex issues and contribute new ideas via experimentation, speculation and nimble thinking.”

Devers got the conversation going via a lightning round of one-on-one interviews with the panelists before inviting the audience to pose questions. A common thread connecting how and why each participant became an artist or designer is that they used creativity to overcome difficult circumstances in their youth. “Creativity added order to a complicated world,” Ossana explained. Chien echoed that sentiment, noting that her burgeoning design talents allowed her to find agency as a shy kid.

“Most people remember one person who either encouraged them or discouraged them as artists when they were kids,” Crenca noted. For him, it was a Catholic school nun who opened his eyes to his own creativity when she attempted to redirect his problematic classroom behavior by inviting him to design a poster for an upcoming event.

The panelists generally bemoaned the current educational model in the US, which discourages curiosity and creativity and suggests that an artistic path is largely one for those who can’t manage mainstream options. “It’s interesting that young kids know all about doctors and farmers and teachers,” Devers pointed out, “but they never learn about designers—the people who shape the world around us.”

Somerson talked about creative types as their own harshest critics and noted that negative judgments frequently reflect built-in biases. “Difference is actually an incredible incubator for creativity,” she said.

Many of the questions from the audience focused on authenticity and how artists and designers balance collaboration and competition. “Studio culture is all about sharing ideas, not about ownership,” said Ossana. “But we could all do a better job of supporting each other.”

Crenca had the last word with this candid observation: “For me, making art is a search for my authentic self. With each piece, I get closer to saying what I mean to say.”