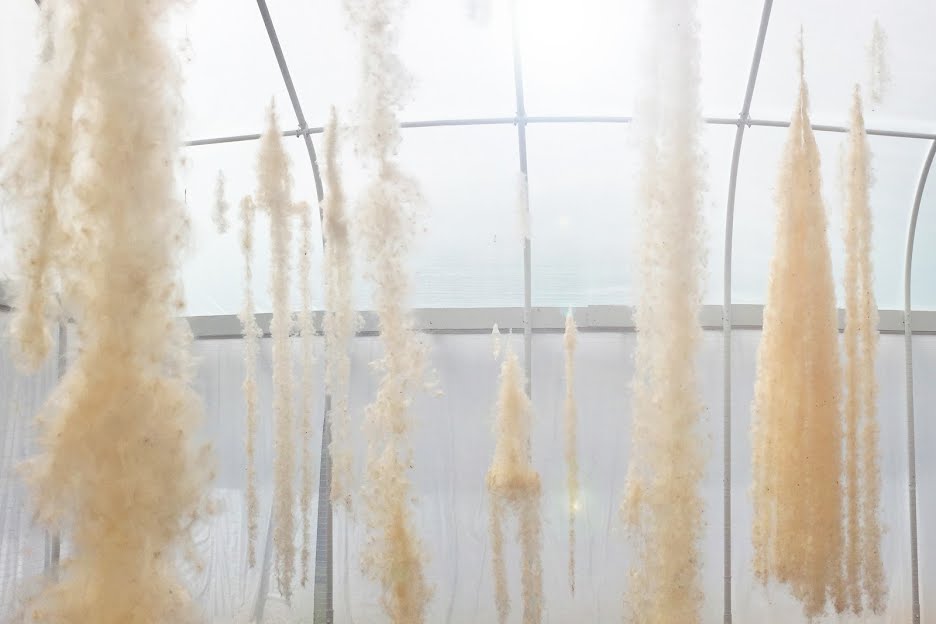 Mixed-media artist Esther Solondz MFA 80 PH has always drawn inspiration from the natural world. For the past 15 years she has summered in rural New Hampshire, where she welcomes hummingbirds into her studio, blurring the line between indoors and outdoors. Long mesmerized by the ethereal quality of milkweed—whose fluffy white seeds sail through her open windows—she finally succeeded in capturing their magic in Floating Between Two Worlds, an installation on view through November 3 at Fruitlands Museum in Harvard, MA. Here Solondz discusses the project, the torment of working with delicate materials and how this latest work fits in with her evolving practice.

What inspired this challenging project?
The original idea came from a sense that outdoor sculpture placed in an urban setting makes sense for the viewer, but if that same work were in the middle of a field, it would seem oddly disconnected.

Presenting Floating Between Two Worlds in an enclosure helps to bridge that gap—to maintain the connection to the natural world but signal to viewers that this is “art”—something meant to be looked at.

Why did you decide to work with such a delicate natural material?
I’ve been collecting milkweed and trying to figure out how to use it for years, so I finally came up with these ephemeral sculptures that float.

I knew from the start that I wanted them to be shown outdoors so they could move with the breeze, but when we were building the structure at Fruitlands, it became apparent that there would be too much wind and the sculptures would get damaged. So, we had to modify it on the fly to allow less air to pass through.

So that last-minute scramble became a group effort?
Yes! I started working on the installation at the beginning of May for a June 1 opening, but there were horrendous rain storms and other problems that set me back. I fell so far behind that I had to gather all these people to come to my rescue (including RISD friends like Jane Dillon MAT 12, Maryjean Viano Crowe MFA 81 PH and Olivia McCullough MAE 83).

Were you able to get the effect you had in mind?
It’s not what I originally envisioned. It took me a year to make the pieces for the show, and I was thrilled with how they looked in my studio: like super-dense floating clouds.

Now that the installation has been up for a couple of months, the milkweed is blowing around and getting more and more spare. I’ve had to accept that it’s going to be an evolving installation. Instead of maintaining what it was, I’ve been going up to Fruitlands and adding onto it. It still looks good but it’s not the same.

But that evolution and the fragility of the materials you used is all part of it, right?
That’s right. For many years I’ve been making things that are frustratingly fragile. I kept asking myself why I was using such difficult, delicate materials. At some point it occurred to me that the work is about things that are fragile and that change over time.

Does your background in photography still play a role in the work you do now?
I started in photography, moved to film/video and then to painting, but I’ve always been extremely materials-oriented, manipulating my photos, painting them, brushing on bleach….

I’ve always had my hands in stuff. And a lot of my work is about light and translucency and capturing the passage of time.

I’ll set something up—like the rust portraits I did a few years ago with iron filings—and then let it happen. It’s similar to photography in the way that you’d make an exposure over time.

Why do you think the work resonates with viewers?
There’s renewed interest in the natural world—more awareness about the relationship between people and nature.

Just this morning I read an article in The New York Times about cow cuddling! People pay money to hug cows. I think it says a lot about how disconnected we all feel from the natural world.