Artist/activist Jordan Seaberry 14 PT encourages students enrolled in RISD’s Pre-College Program to pay attention and get involved in the world around them. 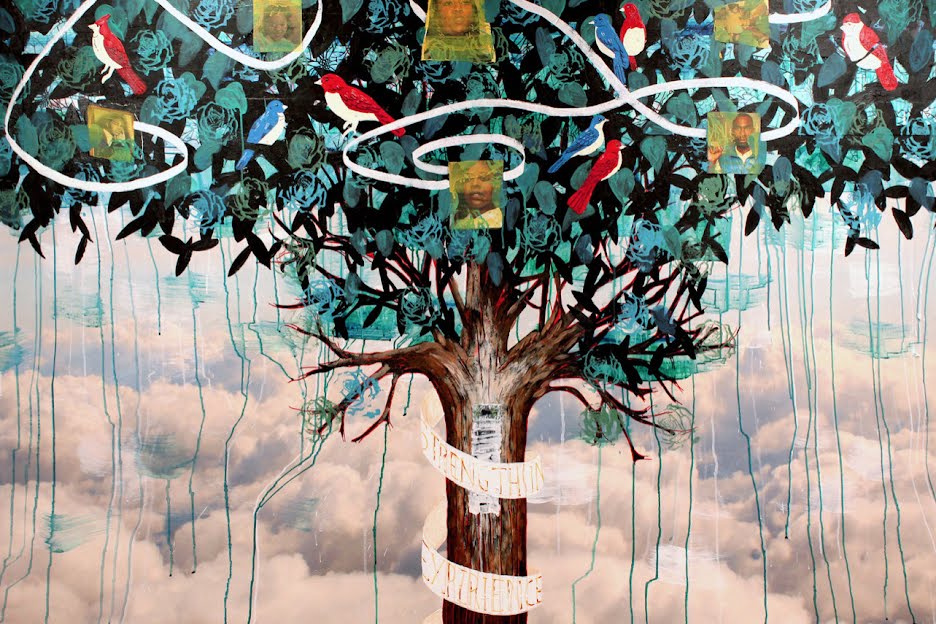 Paintings by Jordan Seaberry 14 PT—like this one from The Wanderer series, Day Two (mixed media and collage on panel, 48 x 78")—address systemic injustice by reimagining a past that has been largely erased.

“It takes imagination to be a student of black history,” says artist/activist Jordan Seaberry 14 PT, “because our past has been all but erased.” On July 18 the Providence-based painter spoke at RISD as part of this summer’s Art and Design for Good series, sharing his work with an enthusiastic crowd of students enrolled in RISD Summer Programs and the Pre-College Program for high school students.

Seaberry is the descendent of Mississippi slaves-turned-sharecroppers who fled the South in the early 20th century (along with millions of other African-Americans) and resettled in Chicago, where he was born and raised. His monumental collage-style paintings tap into this shared history, which also informs his work as director of public policy and advocacy at the Nonviolence Institute.

“Like many, I was born into a world of violence,” Seaberry notes, “and I am a perpetual witness to it at the organization where I work and focus on humanity and dignity for all.”

His ongoing Violences Project portrays people who have lost their lives to homicide as seen through the eyes of their loved ones, building what he refers to as an “equalized narrative” that tells the whole story, whether the victim was a kid hit by a stray bullet or a convicted criminal.

Other paintings respond to systemic racism, transgenerational trauma and such inhumane prison practices as solitary confinement and the shackling of pregnant inmates. One piece Seaberry shared that draws attention to the abysmal state of public education in Rhode Island is painted on an acoustic tile that fell from the ceiling when he was visiting a local high school.

Seaberry says that his creative process is a kind of call and response in which he adds layer upon layer to each piece, which can result in years to complete a painting. The unifying element in all of his work, he adds, is a cohesive surface condition based in part on techniques learned from his RISD mentor, Professor Duane Slick.

Fielding questions from the audience after his talk, Seaberry credited “good-faith criticism” with helping him to find his way as an artist, adding that “indifference is far more challenging than tough criticism.”

And he insists that there is no such thing as a passive bystander. “No one is exempt from politics or history,” he says. “Inaction might mean that a person is benefitting from the status quo, but even inaction is a form of action.”

As the 2018 Kirloskar Visiting Scholar in Painting, Delhi-based artist Asim Waqif shared insights from a career of making art in service of the public good.