Meridith Pingree MFA 03 SC is a maker of geometric and jittery forms. 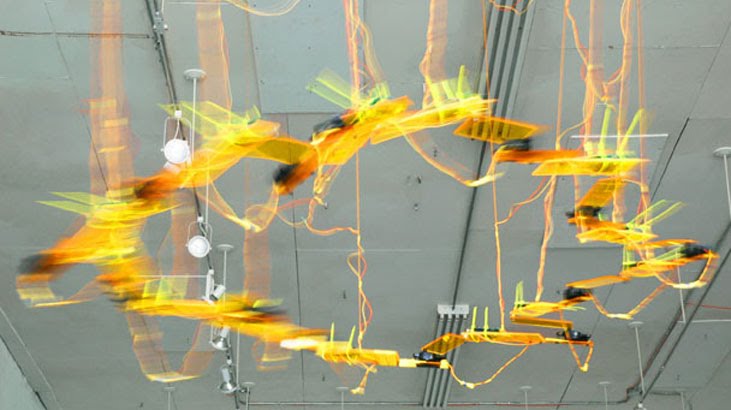 Meridith Pingree MFA 03 SC is a maker of geometric and jittery forms. Her mechanical kinetic sculptures combine craft, technology and human interaction, physically tracking the energy and movement of those who enter a space through motors or sensors.

Pingree, whose work has been exhibited in shows from LA to New York to Miami and her home state of Utah, is one of five contemporary artists featured inNostalgia Machines at Brown University’s David Winton Bell Gallery. The show, which opened in November and runs through February 19, explores the intersection of nostalgia and technology in contemporary sculpture.

Using a wide spectrum of materials and media, the five artists represented were chosen for evocative, abstract works that play with demystifying and humanizing technology. The artists allow “the mechanics of their sculpture to be visible, effecting an atmosphere of reflection or reminiscence, rather than the forward-looking quality associated with technology,” notesMaya Allison, the former RISD Museum curator who organized the show. “The markedly un-mysterious [gears and wires they use] feel familiar, worthy of nostalgia for a time before the computer screen veiled its technology.”

Take Pingree’s pieceUmbrella Torque, for instance. It’s a mixed media sculpture made of intersecting flat plastic shapes suspended from a ceiling. Each angle of the torqued, bright green sculpture has two motion sensors and a reverse motor, causing its components to move and adjust with the energy and motion around it. The exhibit also features Pingree’sYellow Star, an amoeba-like shape rigged with motions sensors that can actually see itself move, triggering a chain reaction of movement as people move through the space.

“My work functions in a way that is similar to many quasi-scientific devices like aura cameras and mood rings,” Pingree says in her artist’s statement. “These displays exist on the fringes of both science and art.” By building her reactive sculptures with “sprawling electronic systems of brains and guts,” she is able to create pieces that respond to human behavior and create “unconventional, complex portraits of people and spaces.”

Based in New York, Pingree has shown at venues such as the Bronx Museum, the James Nicholson Gallery and The Soap Factory, among others, with recent solo exhibitions at Fringe Exhibitions in Los Angeles and Sarah Lawrence College in New York. She has earned fellowships at Skowhegan and Smack Mellon Studio, and been featured inArt Week, The Brooklyn Rail, Vellum and the New York Times. In a Timesreview of her Worm Decoy, made from power door-lock activators, hand-dyed fishnet stockings, toy motion sensors, wire and wood, criticBenjamin Genocchio described the work as “a perfectly neurotic machine: It twitches, jerks and squeaks at random intervals, then slumps into stupor. I love it.”