Matilsha Marxuach 94 CR, Amy Devers MFA 01 FD and Jerrelle Guy 12 IL spoke about how the flexibility they learned at RISD has helped them pivot professionally. 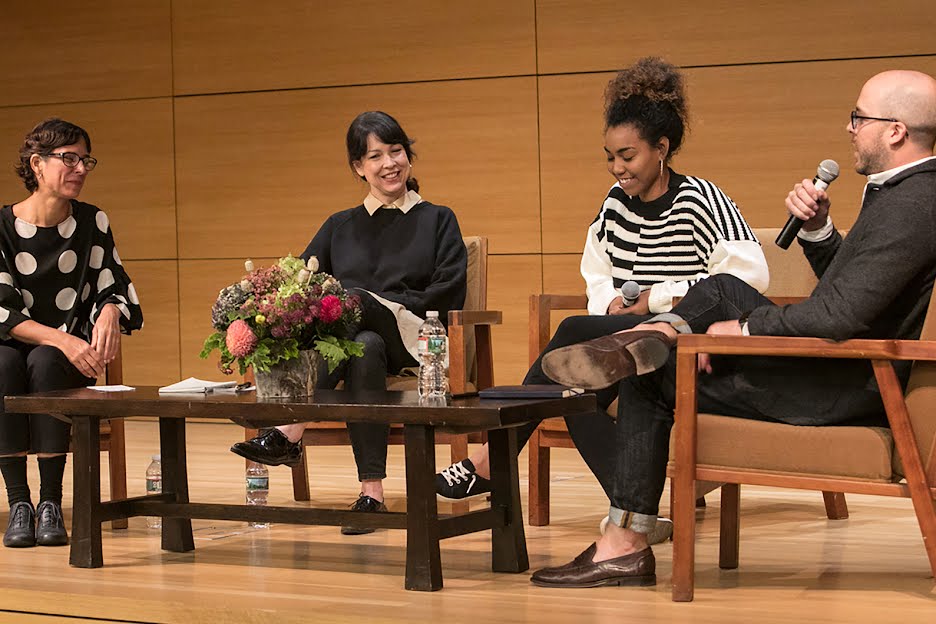 In a lively discussion at RISD Weekend 18, alumni from different decades spoke about how the flexibility they learned at RISD has helped them shift gears professionally.

For Marxuach, who has made it a professional mission to manufacture locally and promote fair trade across Puerto Rico, RISD helped her to become comfortable with the unknown. She describes the first four months after Hurricane Maria hit her homeland in September 2017 as full of nothing but “uncertainty.” With power down, the government struggling to cope and the local factory workers who produce her line of Concalma handbags unable to work, she used her entrepreneurial mentality to establish a community kitchen and distribution center for hurricane victims.

“When you’re trying to make things happen—either for business reasons or for community-building—communicating a vision is so important,” says Marxuach. Her own ability to do so, she adds, was developed when she had to present her ideas in crits at RISD.

Devers agrees and adds, “RISD taught me how to build anything—or at least figure it out.” Several years after graduation, she found herself being pigeonholed as a reality TV host—especially after recording 39 episodes of DIY to the Rescue—so she took matters into her own hands.

“I loved getting under the hood and seeing how television is made,” Devers says, “and I thought I wanted to make my own show.” But she quickly realized that TV was not the right medium for how she wants to communicate, so she shifted gears and helped launch the popular podcast Clever, which she describes as “an opportunity to bring the backstory behind design forward.”

When Guy—the youngest of the panelists—spoke about her own still-developing career trajectory, she picked up on the notion of pivoting by explaining that RISD teaches people “to go with the flow, trust the process and, most importantly, trust yourself.” After graduation she initially found work as a commercial food photographer, joking that she “was the person who made you want that juicy hamburger!”

The shy, biracial maker, who had watched her father survive in the world by “shrinking himself,” says that as a teenager she found herself through food. After RISD she went on to study gastronomy and has worked hard to build a following as a food blogger on social media. That success led to this year’s publication of her first cookbook, Black Girl Baking: Wholesome Recipes Inspired by a Soulful Upbringing (Page Street Publishing).

“I like to think that I opened up a space for black women in the food world,” Guy says. “And even though I have no idea what my next venture will be, I’m not scared. I feel confident.”

Now back in her home country, alumna Mudita Pasari MA 17 is using her design expertise to promote sustainability and environmental awareness.