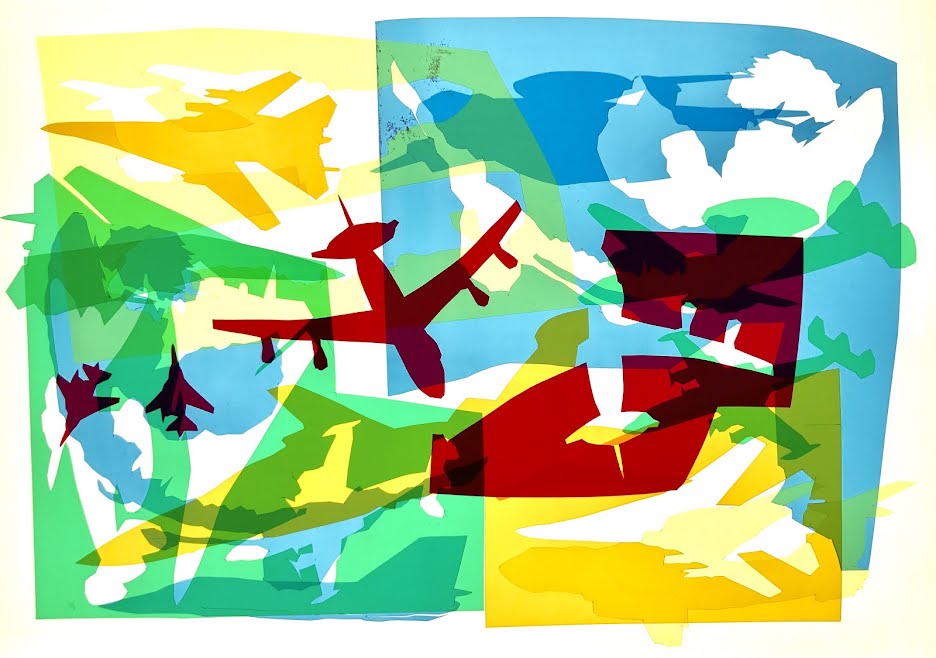 Like most people who express themselves through their studio practice, Cole Swavely MFA 13 PR uses his artist statement to reflect on the evolution and trajectory of his work. So when the Printmaking alum recently revised his statement while aboard an amphibious assault ship, his mind turned to the tension between his art and his career as a naval officer.

“The artist,” Swavely wrote in the third person, “shall […] apply a critical mind to all that he comes in contact with” but also “maintain a critical and professional distance from the officer so as not to infringe on his service.” Despite obvious tension between the two, he actually feels that both pursuits inform one another and—in each their own way—help him make a difference in the world.

Shortly after graduating with his MFA, Swavely joined the US Navy as a Surface Warfare Officer. He spent much of the past three years serving on board the USS Wasp, helping to drive members of the Islamic State out of Sirte, Libya. “Regardless of the politics behind it, I’m proud to have taken part in removing ISIS from the city,” says the Lieutenant, who finds his service both rewarding and also “an infinite well of knowledge and experiences” that inform his studio practice. And although the demands of duty and space constraints aboard the Wasp limited his ability to make art while on tour, he thought about his creative work constantly, filling notebooks with new ideas and drawing inspiration from photographs taken by naval mass communications specialists.

Though his post-RISD life is proving to be atypical, Swavely’s pre-RISD background is the stuff of a “typical art school application,” he jokes. Growing up, the Boston-area native and his brothers painted and drew “constantly,” competing for coveted wall space that their parents—both working artists—reserved for their children’s most impressive work. “I loved that they showed us which works of ours they found the most cool or interesting by doing that,” says the artist, who first learned printmaking as an undergrad at MassArt, where he also met his wife, a fiber artist.

After earning a BFA in Illustration, Swavely was accepted into RISD’s graduate Printmaking program. “It was two years of heaven,” he recalls, noting that he especially enjoyed his department’s close connections with Painting majors. “Everyone learned from each other in an unbelievable way. It was wonderful being able to work with people for 12 to 18 hours a day on things you’re so passionate about.”

While at RISD Swavely made work about—among other things—the training regimen he developed to prepare for a military career. “I turned my art practice into a prescription for becoming a leader and achieving my present and future life goals,” he says— “to be a good husband, a good father, a good soldier and a good artist.”

Swavely’s prints are replete with stark and unromantic images of war and military life, with some reflecting his ambivalence toward its hyper-masculine culture. “It’s exhausting trying to be this tough guy all the time,” he says. “And making art isn’t seen as a good use of one’s time here. That’s frustrating, because I don’t relieve stress by watching sports or TV shows. I relieve stress by drawing.”

Swavely loves the blunt honesty and lack of pretense that defines military camaraderie and says the discipline of military life suits him. But he also admits to missing the RISD community. “In the studio I could talk about whatever the hell I wanted because there was a good chance that someone else in there would also be into it.”

Since his first three-year tour ended last December, Swavely has been spending as much time in the studio as possible before his next deployment. “I see a lot of my [creative] colleagues teaching and showing at galleries and get a little self-conscious because I’ve been doing something else—something very different from that. So it’s nice to get the gears going and make work.”

But just as the officer isn’t set on becoming a military hero, as an artist he’s not in it to be famous. “Sure I want to make work that people think about and talk about,” Swavely says, “but I’m also totally cool if someone just sees my art and says, ‘I want to hang that in my house because it will make me happy when I see it.’”