A curved, shimmering block of apartments in a struggling London neighborhood has won top honors in the2011 Brick Awards, one of the most well-established and respected design awards in the UK. 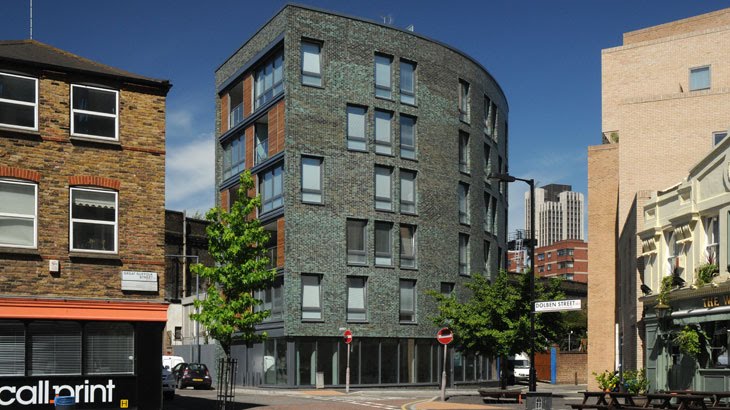 A curved, shimmering block of apartments in a struggling London neighborhood has won top honors in the2011 Brick Awards, one of the most well-established and respected design awards in the UK. The 31–32 Dolben Street project designed byAssociation of Ideas (AOI), the London firm run by longtime Architecture ProfessorPeter Tagiuri, won in the category Best Housing Development, 1–5 units.

The six-story building, which features a copper-glazed brick shell and sustainable solar technologies, stood out among the small-scale housing projects in the competition. “In a category which has traditionally been won by a single family house, this tightly planned block of apartments – just one per floor – intrigued the jury by the way it maximized the potential of its constricted urban site,” jurors noted in awarding the prize. “It also challenged convention by introducing an unexpected shimmering surface of green glazed brick on its two street elevations.”

The Brick Awards, held each year by theBrick Development Association, honors excellence in design and construction using brick. The competition recognizes work in 15 different categories, from best commercial and public buildings to best craftsmanship and most innovative use of brick and clay products.

AOI Managing PartnerJonathan Lovett, who has taught at RISD in the past, says his firm took particular pride in making the project a reality, working “in some of the most difficult economic circumstances to create a high-quality, memorable and distinctive design.” Part of an urban revitalization program, the housing development was built in the south London neighborhood of Camberwell, known for its upscale Georgian mansions but also for areas of deep poverty.

As a practicing architect, Tagiuri has partnered with firms around the world, from London to Paris to Tokyo and Hangzhou, China. His ongoing building projects include structures in China, England, France, Japan, North Africa and the US. Tagiuri, who headed the Architecture department from 2002–06, has taught at RISD since 1987.