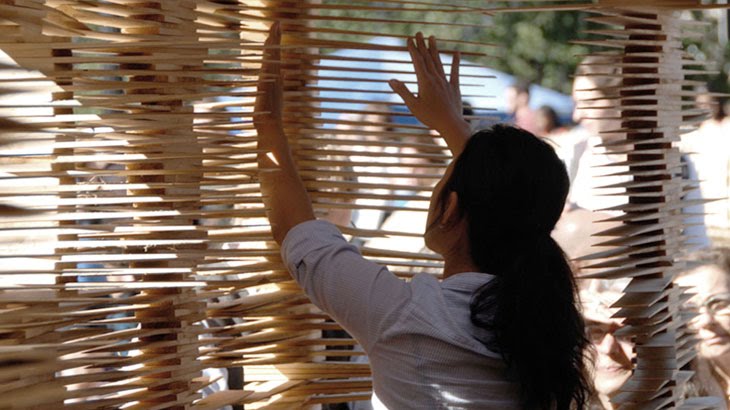 Last year architecture alumsDavid Getty MArch 10, Stephanie Gunawan MArch 10 and Matthew Jacobs BArch 11 accomplished a rare feat for any newly minted art school graduate: In their very first project as the design teamTinder, Tinker, the trio earned international recognition by winning the Jury Prize inSukkah City 2010, a global design competition held in New York City. Beating out 624 entries from more than 40 countries, the group won with a structure made from the most humble of building materials: the wood shim.

But that was just the beginning of the accolades for Tinder, Tinker. In October their reimagined Jewish devotional hut,Shim Sukkah, earned a 2nd prize Next Generation Award in the North American division of the International Holcim Awards competition.

The contest, organized by the Swiss-based Holcim Foundation for Sustainable Construction, aims to promote “sustainable responses to contemporary technological, environmental, socioeconomic and cultural issues from the building and construction industry.”

Ancient forms of shelter built annually during the Jewish harvest festival of Sukkot, sukkahs are intentionally frail, elemental enclosures meant to symbolize the transience of life.Shim Sukkah, which began as Getty’s graduate thesis project, explores the duality of permanence and impermanence through stacked and rotated columns of wooden shims – a material used in traditional construction to fill open gaps. The resulting structure incorporates some 8,200 strips of shim in all and creates a haunting sense of both sheltering and vanishing.

“The typical profile [of a wood shim] tapers from ¼ inch to nothing, over 16 inches,” Gunawan notes of the winning entry. “ForShim Sukkah, this becomes the building block. Stacking of these tapered elements allows for structure and the disintegration of structure to exist closely, within the same thing. The floor, walls and roof all become the space between.”

In awarding Tinder, Tinker with the Holcim prize, the jury commended the project for its “fundamental research on the complexity of processes. . . . [That] research has been transferred into an object of stunning aesthetic quality.”New York magazine, which organized an online voting contest for Sukkah City 2010, said Tinder, Tinker’s scrap-wood wedge design turned “the most plebian of constructional materials into a permeable, poetic scrim.”

The Idaho-based design team, whose members have lived and worked in cities as far-flung as Helsinki, Baghdad and Jakarta, has used its collective architectural voice to create a variety of structures in the US as well. Its projects includeRhode Island Sauna Society (R.I.S.S.), a backyard sauna made from rescued cedar boards. This fall, Tinder, Tinker also submitted the winning proposal in apublic bench design competition in the city of Duluth, MN, with a series of bold, minimalist surfaces that conform to the existing streetscape.