Glass students and faculty members team up with visiting scientists and historians to test and validate a 16th-century recipe for gold ruby glass. 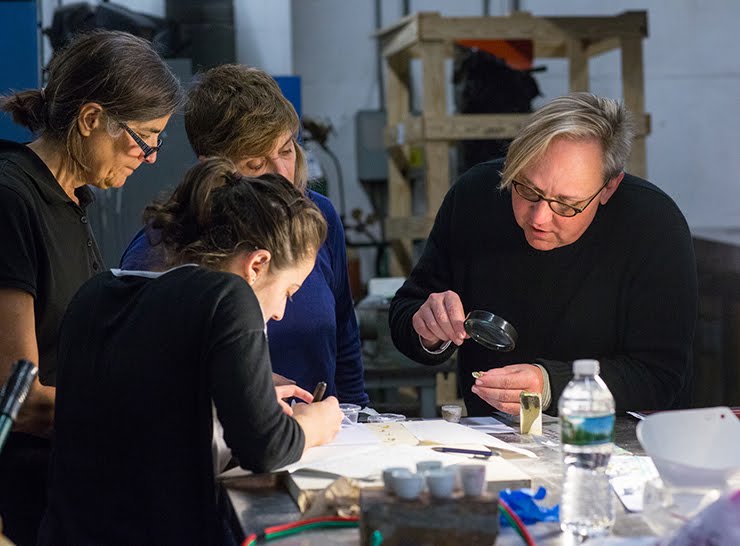 Things were cooking in the Glass department the first week of November as students and faculty joined together with visiting scientists, art historians and glass experts to recreate a 16th-century recipe for gold ruby glass. Part of the ongoing festivities celebrating 50 Years of Glass at RISD, the project came to life last spring when Department Head Rachel Berwick 84 GL connected with Columbia University historian Pamela H. Smith at a Brown University talk on 17th-century emblem culture.

“Pamela and I instantly became old friends,” Berwick joked as she introduced Smith prior to a Wednesday-afternoon lecture in the College Building. Both women recognize the role artisans have played for centuries in passing down material knowledge through making and see their experiments in the studio—and perhaps more importantly, their documentation of those experiments—as a precursor to the modern-day scientific method.

As director of The Making and Knowing Project at Columbia for the past three years, Smith is leading a team of scholars, scientists and expert makers studying a 340-page manuscript from the collection of the National Museum in Paris. Written by an anonymous 16th-century French author/practitioner, the early “how to” book contains step-by-step instructions for a wide range of artisanal techniques—everything from life-casting in metal to taxidermy to counterfeit gem production. The research involves scrutinizing the manuscript’s recipes and instructions, and Smith turned to RISD for testing the gold ruby glass formulation.

“Long before the Internet or modern-day reference books,” Smith says, “artisans were experimenting with non-standardized materials and accumulating a body of experiential knowledge.” She and co-lecturer Dedo von Kerssenbrock-Krosigk—a historian and curator from the Museum Kunstpalast in Düsseldorf, Germany who traveled to RISD to consult on the project—described some fascinating processes early alchemists used before the advent of thermometers and other basic tools. For example, if their hands were too full to operate an hour glass, artisans might measure time by reciting Pater Nosters (Our Fathers).

The gold ruby glass recipe, Smith explains, includes gold leaf, red lead, quartz and sodium carbonate and requires the maker to heat the ingredients in a reverberatory oven (which provides indirect heat) for 12 hours, cool the materials and then pound them into a very fine powder using a glass mortar and pestle before heating them up again.

“But there’s a lot of debate about how much time is really needed to complete these chemical reactions,” says Brown University Professor of Earth, Environmental & Planetary Sciences Reid Cooper. And visiting glass expert Glen Cook—chief scientist at the Corning Museum of Glass in upstate New York—points out that precise translations of the necessary ingredients are difficult to decipher and that even the original alchemist who documented the recipe was cagey in his notes about whether or not he actually succeeded in making gold ruby glass.

But such obstacles only helped to further motivate the team of modern-day alchemists experimenting at RISD. Guided by department technician Hunter Blackwell 12 GL, they toiled for three days in the Hot Shop and the alleyway behind the Metcalf Building, using different ovens and materials and working late into the night to recreate the recipe. Outside in the alley, Mike White 18 GL helped to stoke the stove the Furnace Team had created, attempting to keep the temperature between 2,000 and 2,200 degrees Fahrenheit by adding charcoal chips to the fire every four minutes.

Meanwhile, five flights up in the Hot Shop, Associate Professor of Glass Jocelyne Prince MFA 94 GL was working with another team of students on fabricating a glass mortar and pestle from scratch. As Berwick, Smith and von Kerssenbrock-Krosigk pored over 15-ml teacup crucibles, they hypothesized about the disappointingly yellow-green results the team was achieving.

But Cook was ever cheerful as the night wore on. “Chemistry didn’t even exist as a discipline when this manuscript was written,” he explained. “The writer didn’t always note the details we now know to be important. But it’s exciting to imagine that we’re reconstructing the same experiments the author conducted almost 500 years ago. And failure—understanding why things don’t work—is an essential part of figuring out why other things do work.”

Glass artist Toots Zynsky 73 GL collects the 2015 Smithsonian Visionary Award and is as busy as every preparing for three new shows.