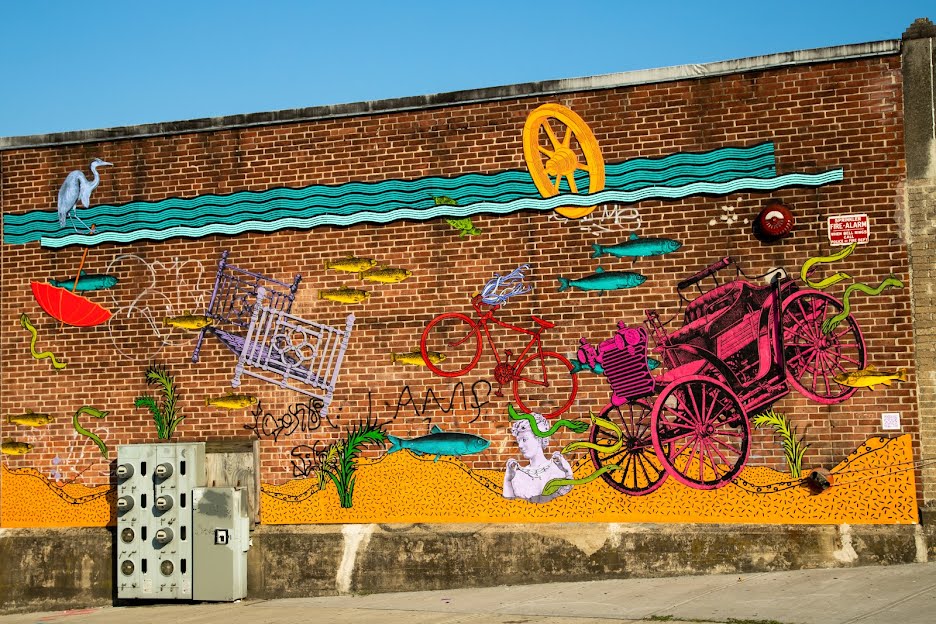 Working with the city, Keri King 05 IL created this mural—called What's in the River?—in the Olneyville section of Providence.

Providence-based artist Keri King 05 IL finds inspiration in collaboration, working as a set designer with the Wilbury Theatre Group and creating public art with local nonprofit AS220 and with the Providence Public Library, among others.

She recently teamed up with Providence’s department of Art, Culture + Tourism to create a temporary, site-specific artwork on the Woonasquatucket River Greenway.

“The Woonasquatucket River was once an important transportation route for native Algonquian peoples, including those of the Narragansett and Wampanoag tribes,” the artist explains. “Its name translates to where the salt water ends.”

Unveiled in late July, King’s massive mural now brightens the brick wall at 99 San Souci Drive—in view of the Woonasquatucket in Providence’s Olneyville neighborhood—and playfully answers the question “What’s in the River?” (in both Spanish and English).

Highlighting everything from colorful trout and herring to bicycles, wagon wheels and industrial jewelry molds, the mural teems with backstories that can be revealed through scanning a QR code on site.

One of the oddest involves a weird weather event from 1900 in which fish purportedly rained down on Providence. Today meteorologists believe the phenomenon was caused by a tornado that touched down on the river, siphoned up an assortment of fish and then dropped them onto the corner of Harris Avenue and Joslin Street. At the time, many local residents were understandably alarmed and saw the fish as harbingers of doom.

“I was able to work with a fantastic team of installers and fabricators on this project, and got to dive deep (so to speak) into research with librarians, anthropologists and stewards of the river. I'm so grateful for the generosity and talents of everyone involved and especially for the warm welcome of Olneyville neighborhood businesses and families.”

Here in RI | The Beauty of Bespoke Books

As the creative director at Lotuff Leather, Lindy McDonough 08 ID is helping to establish the company’s growing reputation as a leader in luxury leather goods.