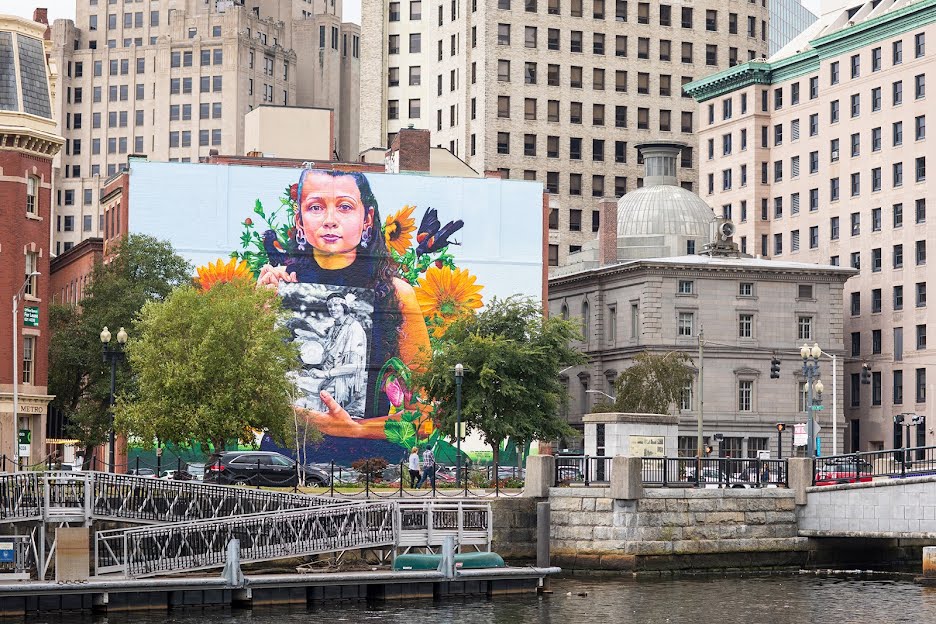 Arts activist Yarrow Thorne 11 ID believes that public art can transform the city of Providence into a more interesting and welcoming environment for everyone. Since launching The Avenue Concept in 2012, he has raised funds for and facilitated nine striking murals, dozens of sculptural installations and a series of arts-related events involving more than 150 local artists.

“I’ve always had an entrepreneurial spirit,” says Thorne, “and I like solving problems and taking on complicated challenges.” He adds that having dyslexia has kept him from following more traditional paths and forced him to figure out how he can best contribute.

Thorne grew up in Northampton, MA, where his parents—both architects and educators—led a movement in the 1970s that reimagined the fading mill town and rebuilt it into the vibrant, arts-infused community it is today. “At a time of limited government funding, my mom raised money one brick at a time,” he says. “That taught me the value of community in supporting the arts.”

After struggling through high school, Thorne came to RISD “for all the wrong reasons,” which led to him taking a 10-year hiatus before earning his degree in Industrial Design in 2011. “Experiencing the RISD environment for the first time was like walking on Mars,” he recalls. “I had never picked up a piece of charcoal in my life and had no clue what I was doing.”

For Thorne, the most valuable part of the RISD experience was working with diverse members of the RISD community—students, faculty, staff—to foster collaboration, cut through red tape and make things happen. As a senior, he launched an outdoor public art program called RISD Art Walls (R.A.W.), which helped to delineate campus spaces, discouraged graffiti and provided opportunities for students to step outside of their studios and work at a large scale.

At RISD he also connected with knowledgeable mentors like Dorothy Bocian (RISD's former Fulbright advisor), who later became a key supporter when he developed The Avenue Concept. And his R.A.W. initiative also led to critical seed funding from the Robert Rauschenberg Foundation, whose executives saw it as a kind of “proof of concept.”

“Nick also went to Classical and was running a gallery in Vienna when we launched The Avenue Concept,” Thorne explains. “He was excited about bringing these artists back to his hometown.”

The Avenue Concept has also brightened up the landscape with a wide range of 3D artworks, developing a sustainable model in which concrete sculpture pads are used to support a rotating and evolving body of work. Eye-catching pieces like the 20-foot, 10,000-pound Lotus by Korean sculptor JaeHyo Lee and larger-than-life metal creatures by Peruko Ccopacatty made use of these foundations for several months before being replaced by other jaw-dropping works.

“If you’re going to pay to pour a three-inch concrete sidewalk, you might as well pour a pad that’s a foot thick instead,” says Thorne. “It’s pennies on the dollar. Developing a sustainable public art program means considering your return on investment, growing the program in stages and managing it all in a systematic way,” he adds.

Another aspect of the nonprofit that has evolved systematically over time is its residency program, which brings up-and-coming artists to Providence from around the world. Thorne says the model is unlike the typical residency, where artists are offered visibility and a beautiful natural setting in which to work, but little else. “We offer them the largest wall they’ve ever seen, an unlimited budget for materials, brand-new lifts, a place to live and time to experience Rhode Island,” he says.

This spring Thorne is excited about hosting Steven Siegel, an artist based in Hudson, NY. In preparation for his residency, The Avenue Concept team gathered, cleaned and sorted used plastics and fishing nets, which the found-materials artist is manipulating into a 25-foot installation for Providence’s I-95 corridor.

“It doesn’t take a lot of money to do this kind of thing,” Thorne insists. “It just takes vision and some out-of-the-box thinking.”

A spring Architecture studio sheds light on collaborative place-making and green infrastructure while providing Providence with a much-needed solution to stormwater runoff.

Contributing to the Greater Good