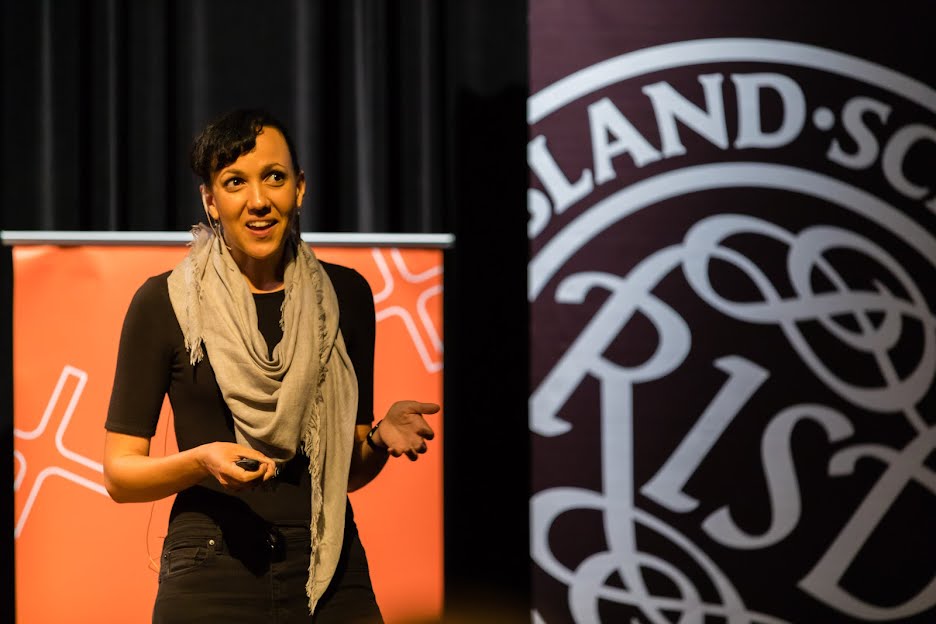 Former White House Creative Director Ashleigh Axios 08 GD spoke about the role of design in delivering hope and change as part of the Obama administration.

When designer Ashleigh Axios 08 GD took to the stage in the RISD Auditorium on September 18, she admitted to being impressed as President Rosanne Somerson 76 ID introduced her. “Listening to my bio is a little intimidating,” she joked with the crowd. “I just worked on the work but it sounds so grand when positioned that way.”

In 2012, a mere four years after graduation, Axios was hired as an art director at the Obama White House. Two years later, she was promoted to creative director. Now she leads marketing, communications and branding for Auttomatic, the company behind Wordpress and a number of other influential web platforms, and returned to RISD as the keynote speaker for DesignxRI’s fifth annual Design Week RI.

Describing a “beautiful storm where pieces combined to make me highly qualified for the [White House] role,” Axios spoke of early work with nonprofits and the DC chapter of AIGA becoming an unexpected launchpad for the federal government. While a political appointment wasn’t necessarily what she envisioned post-RISD, she discovered that “a role in government is one of the best ways to get involved and effect change on a global scale” and wholeheartedly encourages other young designers to consider civic engagement.

In offering 15 creative strategy tips she learned from working at the White House, Axios treated the audience to behind-the-scenes photos, memories and details about how the design process fit into the daily work of the Obama administration. Refreshingly straightforward, her advice included reminders to “see failure as good data” (illustrated by recounting a photo-sharing kerfuffle at the White House Correspondents' Dinner) and to “narrow in on audience” (as her team did when they commissioned an illustrator to make persona-specific comic strips to boost public awareness of enrollment option through the Affordable Care Act).

When asked about her view of the current administration’s “brand” and dismantling of the efforts she worked so hard to support, she cited President Obama’s uncanny ability to “take the long view of things.” She and former coworkers have “learned to count small wins where we can,” she explained, noting that it has been heartening to see whitehouse.gov remain an open-source site (a redesign she oversaw) and the We the People petition platform her team created still up and running (regardless of how much it’s being used under Trump).

In 2015 Essence named Axios among the “29 powerful black women calling the shots in the Obama administration,” but her unassuming, approachable presence is not the sort typically associated with a Washington power player. “The reason my introverted, hide-behind-the-podium self gets up on stage is because I want to see more representation. I want to encourage others to see the possibility in themselves because, honestly,” she offered with a smile, “I’m not really that special.”

Members of two Congressional caucuses announce the new STEM to STEAM Act of 2017 at a briefing on Capitol Hill.

Making Noise in the Nation's Capital

Students participating in this year’s Alternative Spring Break project traveled to Washington, DC to investigate a diversity of approaches to political activism.