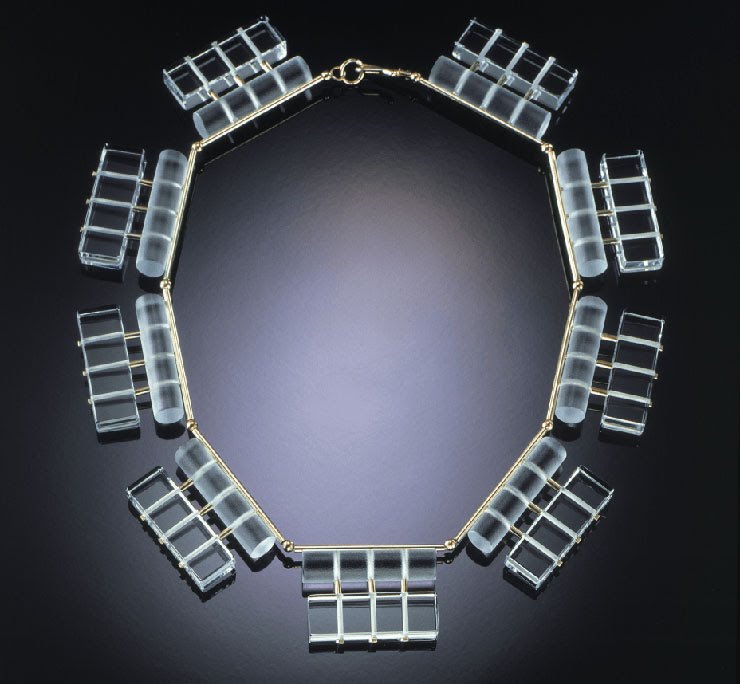 Necklace No. 4 (from the Lucent Lines series, plate glass and 14k yellow gold) is among the work by Linda MacNeil 76 SC on view in a major retrospective at the Museum of Glass in Tacoma, WA.

“The fun of a retrospective exhibition is seeing the progression of my work from the beginning until now,” says Linda MacNeil 76 SC, who has created more than 700 necklaces, brooches and earrings over the past four decades. Selections from her oeuvre have been on view since January in Jewels of Glass, the first jewelry exhibition ever at the Museum of Glass in Tacoma, WA and the most in-depth exploration to date of her significant contributions to the late 20th- and early 21st-century studio jewelry and glass movements.

MacNeil’s one-of-a-kind sculptural jewelry blends metal, semiprecious stones and a brilliant array of customized glass she creates in her New Hampshire studio using stock casting glass and factory sheet glass she has been collecting since the 1970s. “The metal provides the structure – the mechanical form I build upon,” she explains. “But the most important step in my creative process is arranging the glass elements.”

MacNeil plays with glass shapes in the studio, considering color and other qualities inherent in each piece ­– whether it’s transparent or opaque, reflective or refractive, sandblasted, full of bubbles or acid-polished. “I arrange the glass and metal parts on a large table,” she says, “and work out my ideas by adding or subtracting colors and shapes.”

The results are sculptural but always wearable, never veering into purely conceptual work that doesn’t complement the human body. “I tend to think symmetrically and in simple geometric shapes and straight lines,” she notes, “establishing a personal look using classical elements of form and design.”

Road to RISD
The daughter of two designers, MacNeil started making jewelry as a teenager growing up in Massachusetts and began college at Mass Art, where she met and later married studio glass artist Dan Dailey MFA 72 CR. He introduced her to the late legendary metalsmith and longtime RISD Jewelry + Metalsmithing Professor Jack Prip, who encouraged her to transfer to RISD as a junior.

“In addition to Jack, RISD had better facilities and some really good students who influenced my work,” the artist recalls. “And having grad students in the same shop was very beneficial to me.”

MacNeil makes everything by hand and believes that a hands-on education is critical, even for artists who design pieces digitally. “I chose to make one-of-a-kind pieces early on instead of making what I thought would be popular,” she says. “After leaving RISD, it took a good 15 years for my work to start selling with any regularity, but I never lost that itch to make new work and get it out into the world.”

Though MacNeil and Dailey are each very successful in their own right and have shared studio space for decades, she prefers to work alone. “The way I collaborate with Dan is by sharing our studio facilities, home and family,” she explains. “And I don’t like to work with assistants because I create as I’m making, and it would be impossible for someone else to fully understand how to do what I want in each step of the fabrication process.”

MacNeil’s work is influenced by a wide range of creative voices, from ancient Egyptian jewelry makers to medieval painters to cubist and modernist sculptors. “I’m particularly attracted to the modernist painters, who focused on colors and shapes and made highly stylized images,” she notes. “I think my structures are similar, and abstraction of form is what I believe I do best.”

MacNeil “has broken new ground, drawing upon centuries, if not millennia, of jewelry history while absorbing current trends in the fine arts, architecture and design,” notes curator and jewelry historian Davira S. Taragin. “Mining and reinterpreting historical styles and transforming them with her new and unique perspective, [she] personifies the postmodernist sensibility.”

Jewels of Glass continues at MoG through October 1.