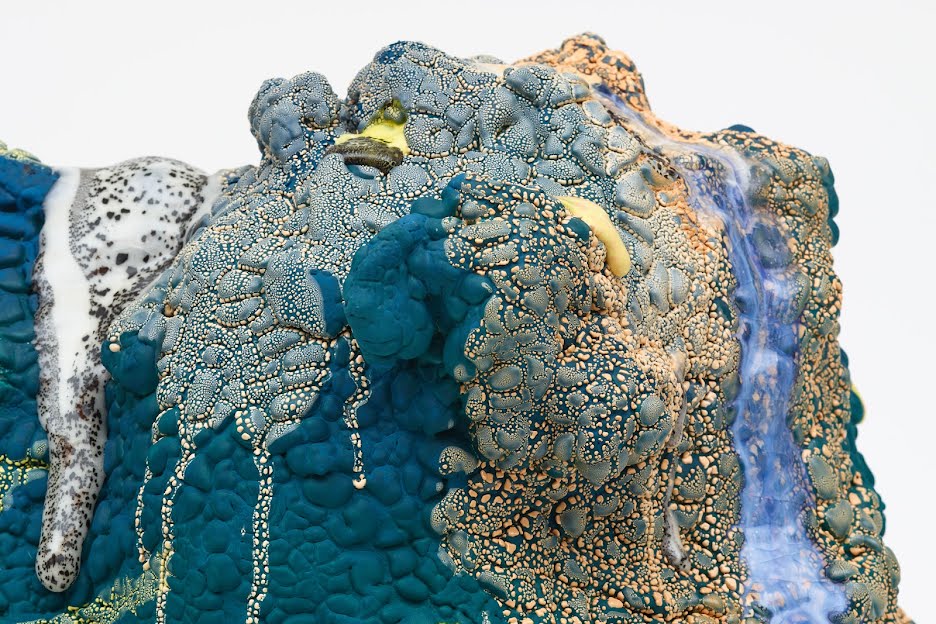 Ceramist Brian Rochefort 07 CR understands uncertainty as a fundamental of life as well as art. “When you couple something based on emotion with value and social capital,” he told Young Space last year, “[art] makes for a chaotic profession to navigate.”

Yet the Los Angeles-based artist appears to be navigating just fine, cutting through the chaos of the contemporary art world to emerge as an increasingly noticeable maker in the muddy medium of clay. Absorption by the Sun, his first solo museum show, continues through September 8 at the Museum of Contemporary Art Santa Barbara (MCASB) in California and then moves on to Massimo De Carlo in London in November.

In creating glazed stoneware and glass sculptures that “bulge and drip with gloppy blobs and crackled chips of glaze,” as T, The New York Times Style Magazine describes it, Rochefort is also calling attention to our worsening climate crisis. After more than a year of intense research in the Amazon rainforest and elsewhere in Latin America (including a January 2019 residency at The Mistake Room in Guadalajara, Mexico), he has been having an equally intense year exhibiting the results.

In early May Rochefort’s work went on view in Collapse at Caterina Tognon in Venice just as the 2019 Venice Biennale was getting underway. The three-month-long show was co-hosted by Van Doren Waxter, the NYC-based gallery that represents him, and featured sculptural “craters” that erupt “with the energy of a volcanic explosion,” as the gallery describes it.

Having developed a process that pushes the bounds of the medium, Rochefort experiments with multiple firings, maximum glaze and reconstructions of broken-down vessels—drawing from and alluding to both the lush beauty he discovered in the rainforest and the precarious plight of the planet.

The artist’s focus was also eminently clear in 2030, his winter solo show at Van Doren Waxter. Named for the final year the United Nations expects humans can effectively combat the effects of climate change, the show provided a glimpse of what audiences are now discovering at the MCASB: works of unnatural beauty that presage the devastation to come.

Water in the Desert, Ceramics in the Landscape