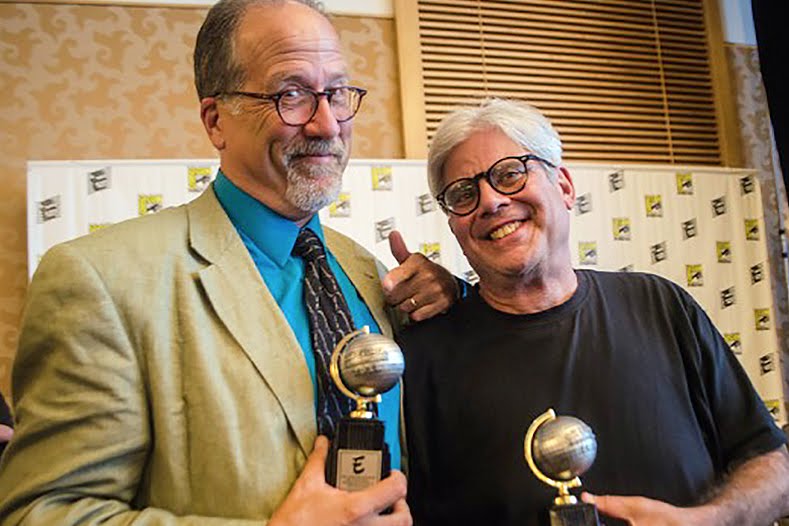 How to Read Nancy: The Elements of Comics in Three Easy Panels (Fantagraphics), a deep dive into Ernie Bushmiller’s classic 20th-century comic strip Nancy, won the 2018 Eisner Award for Best Comics-Related Book. Cowritten by Illustration faculty member Paul Karasik and his longtime buddy Mark Newgarden (who teaches at both Pratt and Parsons), the book postulates that “everything you need to know about reading, making and understanding comics can be found in a single Nancy strip.”

The strip in question is a three-image Nancy installment from 1959 in which the main character’s rascally friend Sluggo prepares to shoot her with a water pistol, oblivious to the fact that she’s armed with a loaded garden hose. The authors reveal “the syntax of a mass medium through the molecular deconstruction of [the] strip,” as they put it, pointing out exactly how Bushmiller “intentionally uses every tool in his toolbox” to guide the reader’s eye and set the pace.

How to Read Nancy also “explores the benefits of deep reading, where focused contemplation reveals a subterranean world of hidden structures and ingenious choices,” the authors point out.

“A classic Nancy strip... is purposefully pristine, precisely executed to get the laugh,” they go on to say of the popular syndicated comic, which ran in newspapers across the country for 44 years. “The simplicity is a carefully designed function of a complex amalgam of formal rules.”

The book actually emanated from a short essay Karasik and Newgarden cowrote 30 years ago—in 1988. “Mark and I both teach comics classes, and the more we projected the strip on the screen, the more we realized how much more there was to talk about,” Karasik notes in a recent interview with Comics Alternative.

There they also explain that they originally got inspired to take the “molecular deconstruction” approach at a workshop they attended in NYC in which experimental filmmaker Ken Jacobs got super-granular with Frank Capra’s classic 1941 film Meet John Doe, screening it frame by frame over the course of several months and dissecting its every nuance. “It blew our minds,” says Karasik, “and led to our thinking about comics in the same way.”

How to Read Nancy, which includes rare illustrations, more than 160 Bushmiller strips and a foreword by late comedic genius Jerry Lewis, has now been adopted as a valuable textbook at colleges and universities ranging from the School of Visual Arts in Manhattan to California State University and Cambridge University in the UK.

Already in its second printing, the book has garnered praise in The New York Times, The Boston Globe, The Washington Post, The New York Review of Books and Public Radio International’s Studio 360. In his review, comics scholar Jerry Beck cut to the chase, writing: “This is easily one of the most brilliant books about … the aesthetics of comics ever written.”