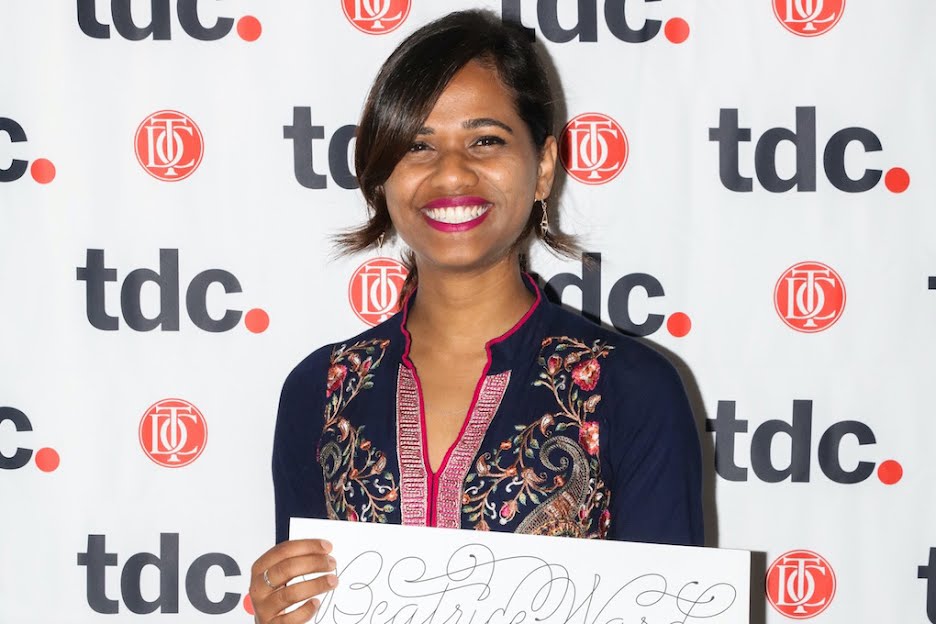 Based on the strength of her graphic design and typographic work, the Type Directors Club (TDC) and Monotype magazine recently awarded rising senior Tasnima Tanzim 18 GD its $5,000 Beatrice Warde Scholarship. A panel of all-female judges selected her as the top student from more than 1,700 who applied from around the world. At a ceremony at New York City’s Cooper Union on July 18, they presented her with a certificate created by noted calligrapher Martina Flor.

Established in 2014, the prestigious award is named for the late Beatrice Warde—the first woman to become a member of the TDC—and recognizes one female undergraduate student each year whose work demonstrates “exceptional talent, sophistication and skill in the use of modern typography.”

Tanzim says that as a designer she’s inspired by listening to people’s stories and mixing design disciplines. “I used to call myself a graphic designer,” she says, “but as I get older and begin exploring my interests more, I’ve begun to call myself a multidisciplinary designer.”

Born in Bangladesh, Tanzim moved to the US when she was 10, which forced her to think about the meaning and importance of communication as she learned English. She devised her own note-taking strategy involving words and drawings before attending the High School of Art & Design in midtown Manhattan.

A Graphic Design major at RISD, Tanzim is also pursuing a concentration (which is like a minor at other colleges) in Nature–Culture–Sustainability Studies. Her commitment to developing a sustainable practice has led to a number of unique projects, including her Annual Brick Book, a compendium of “scraps and misprints” that reminds her of the year’s achievements and failures.

“What started off as a simple reason not to waste paper ended up becoming one of my favorite pieces,” Tanzim says. “Generally speaking, I wouldn’t say I have a particular style, but I do embrace the temporal boundaries of design. I think as time progresses, so should design.”

Tanzim notes that each project she undertakes begins with extensive research. Although she has amassed a lot of experience in digital design, she harbors a particular attraction to the tactile qualities of print, which can’t be duplicated on screen. “I love flipping through the page numbers in a thick book to see if they’re aligned,” she says, “because they never are! There is a beauty to that human and machine error—an originality that should never be eliminated.”

Nadine Chahine, a member of the scholarship award panel representing Monotype, noted that the judges were especially enchanted by a project of Tanzim’s called An Important Notebook. Inspired by the Abbas Kiarostami film Where Is the Friend’s Home?, it took on a journey of discovery into the personal details of her friends’ lives. One friend challenged her to learn how she came out to her parents; another to uncover the name of a childhood pet.

“The point of the assignment wasn’t to find the answers but to go on a journey with a clear intention,” Tanzim explains. “The journey became the narrative. I had a lot of trouble figuring out what form I wanted the narrative to take, but print seemed practical.” In the piece she created, she shuffled the disparate narratives and assigned a color to each so that readers could retrace her steps or follow one story.

Over the summer Tanzim has been interning at Silo, a human-centered design agency in New York City where she’s honing her abilities as a communications designer. When she returns to Providence in September, she plans to dig in to her senior thesis—an investigation into the role of graphic design in NYC’s Bangladeshi immigrant community. “I have been taught western design all my life,” she explains, “[which is an approach] I’m beginning to question. I’m hoping to introduce new rules and aesthetics of design to my immediate community—to encourage them to break out and investigate their own culture.”

Through a variety of projects, senior Olivia Park 17 GD uses graphic design to dismantle stereotypes and question the influence of technology on popular culture.

Women at the Forefront of Design

Four outstanding RISD alumnae were among 16 women artists recognized in an Artsy editorial for advancing design in the US.