At a talk co-sponsored by RISD and Brown, #MeToo movement leader Tarana Burke inspired students through her personal history of advocacy. 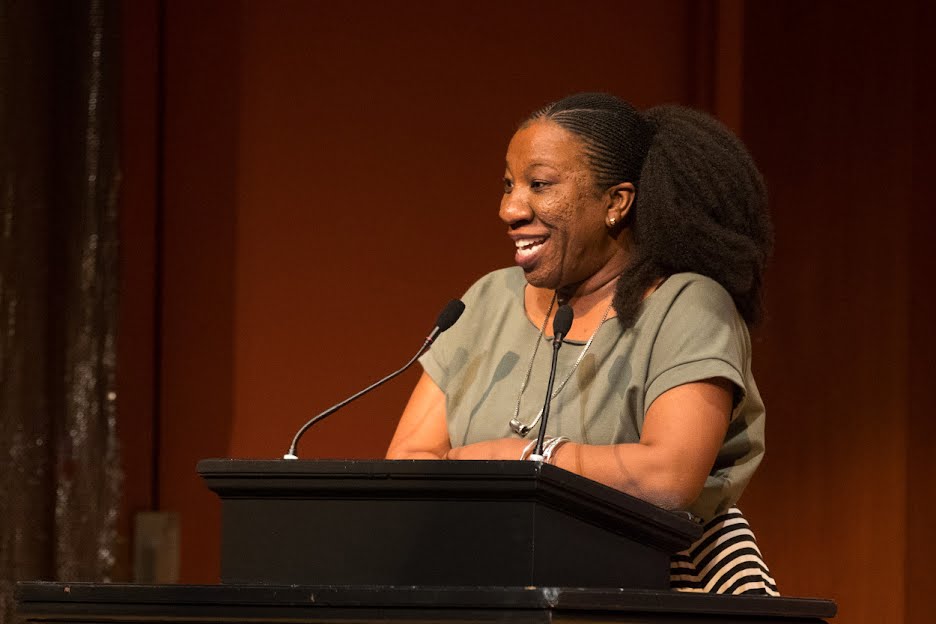 “This is a movement about love, that’s right,” proclaimed #MeToo movement founder and leader Tarana Burke, speaking to a packed house of Brown and RISD people towards the end of an evening appearance on Valentine’s Day. “Really, it’s a movement about joy.”

Reinforcing introductory remarks made by President Rosanne Somerson 76 ID, Burke went on to speak about how she keeps her spirits up while leading a movement with as much consequence and reach as #MeToo. “It’s taken me a long time but I’ve learned to cultivate a deep well of joy in my life in order to heal… It’s as much about survival as being a survivor.”

In her talk at Brown University’s Salomon Center for Teaching—which was followed by a Q+A session moderated by Emily Owens, an assistant professor of History at Brown—Burke walked the audience through the 25 years of activism that preceded her current watershed role leading #MeToo. She recalled moments of struggle and epiphany during her teens and twenties, when she worked with the 21st Century Youth Leadership movement in the Bronx and the Just Be organization in Selma, AL. And she noted that while many topics were freely addressed among advocates and the communities they served, “the conversation around sexual violence was always had in secret.”

To bring the issue out of the shadows, Burke found herself reflecting on her own journey as a survivor when, more than a decade ago, she began looking for a tool that could provide access and channel empathy into collective action. “It was the relationships I had with other women that gave me permission to start healing,” she explained. Launching Me Too in 2006 “came from a place of trying to figure out how to connect. It worked because the concept was so simple—it really was a conversation starter for the whole conversation,” which for her encompasses everything from personal healing to public and private policy changes.

When asked about the future of the movement and the reflex that leads some to mistake its current groundswell of media attention for victory, Burke offered the knowing chuckle of someone who’s been in the fight for a long time. “In the history of the world and the centuries of history of this country, we’ve been having a sustained conversation about sexual violence for about six months. So, no, we haven’t won yet,” she responded wryly.

But from her visits to campuses, Burke clearly has hope in the future and the role that student voices will play in “moving the needle around the issue.” She noted that while her generation succeeded at starting the conversation and introducing new language to help facilitate it, young people today excel at “thinking outside the box” when it comes to social issues.

Burke emphasizes that change must be driven by those most affected by a problem. For her part, this means supporting Hollywood’s embrace of the movement in the post-Weinstein era but also steering the conversation back toward the more marginalized and vulnerable communities she has worked with her entire life.

“The visibility I have now has been interesting and it can be scary,” Burke noted, adding that she’s “someone who prefers to work behind the scenes.” On the other hand, she pointed out, “I realize you can’t buy this kind of exposure. So as long as they keep passing me the mic, I’m going to keep taking it. I don’t want this conversation to go on without certain voices in it.”