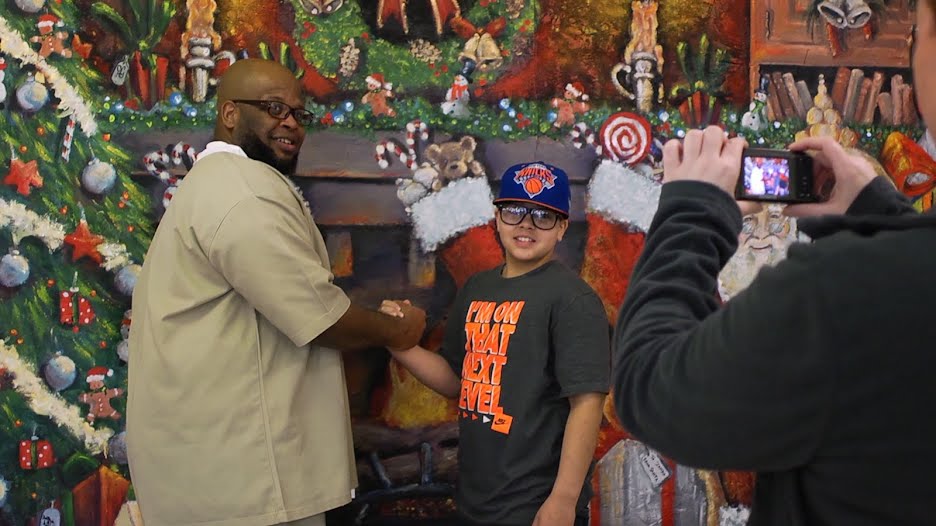 When Denali Tiller 15 FAV drove to a medium-security prison in Rhode Island, she didn’t know exactly what she’d capture on film. She had brought a boy named Tre to visit his father, a convicted felon serving a 15-year sentence for armed robbery. When the two started talking, Tiller didn’t put down her camera as Tre admitted to carrying a friend’s handgun. And she kept rolling when he broke down in tears as his father urged him not to repeat his own mistakes.

“As a director, I always want to respect the boundaries of the subjects I’m filming,” Tiller explains. “The last thing I want is to be exploitative. We would have stopped rolling if Tre or his father asked us to. But they didn’t—and we caught a beautiful moment that shows a 13-year-old boy who misses his father and is struggling with very adult problems. Unfortunately, this is a reality for many young people.”

The moving scene is central to Sons and Daughters of the Incarcerated, a 22-minute documentary that makes its public debut this Thursday as part of the annual Film/Animation/Video Senior Show. Over the course of four full evenings—May 6, 7, 8 and 9—a total of 43 films will hit the big screen in the RISD Auditorium.

In addition to Tiller’s documentary, FAV seniors will present degree project films as short as the minute-long Mother Forest by Tiara Little 15 FAV and as long as Alex Lee’s 25-minute film Amongst Strangers. But whether they’re presenting hand-drawn animations, compelling live-action narratives, digitally manipulated imagery or stirring performance art, students are expressing a personal vision through their final films.

Lachlan Turczan 15 FAV is screening Ecliptic, a combination of digital imagery and videography that shares a fresh perspective on the natural world, while Jon Gourlay 15 FAV is showing an experimental film that features rare footage of microscopic sea creatures. In the course of developing initial concepts into finished films, students collaborate with a wide range of specialists and assistants, mastering the use of professional production and editing software along the way. Many of the films being screened this week will go on to garner awards and critical recognition as they move into the festival circuit.

The Love Story, a powerful CGI animation by Evan Grothjan 15 FAV, will premiere at the Wednesday and Friday screenings. Surreal scenes of rowdy football games, drive-through fast-food restaurants and garish lawn furniture are woven throughout the classically scored piece, which presents a first-person perspective on a man waking up from “the American Dream.” Grothjan also includes snippets of text from the Senate Select Committee on Intelligence report released last December, which discloses disturbing details about the CIA’s post-9/11 interrogation practices.

“This work is making a statement about hypocrisy in America,” Grothjan notes. “Creating aesthetically pleasing structures out of politically sensitive material can begin to feel self-indulgent and manipulative. But I believe it’s necessary to allow politics and the humanities to come together.”

Tiller agrees, saying of her own project, “It’s important to share these true-life narratives.” In addition to probing the effects of incarceration on the state, taxpayers and communities, she wants to highlight its impact on “the families left behind and the children who will ultimately shape our future. I can’t wait for my mother to see the final cut,” she adds. “It’ll be a hugely rewarding moment to see how people respond to the project I’ve worked so hard to complete.”

Graduating seniors Emily Neilson 15 FAV and Katy Strutz 15 IL are thrilled to move on to LAIKA, a creative animation studio outside Portland, OR.