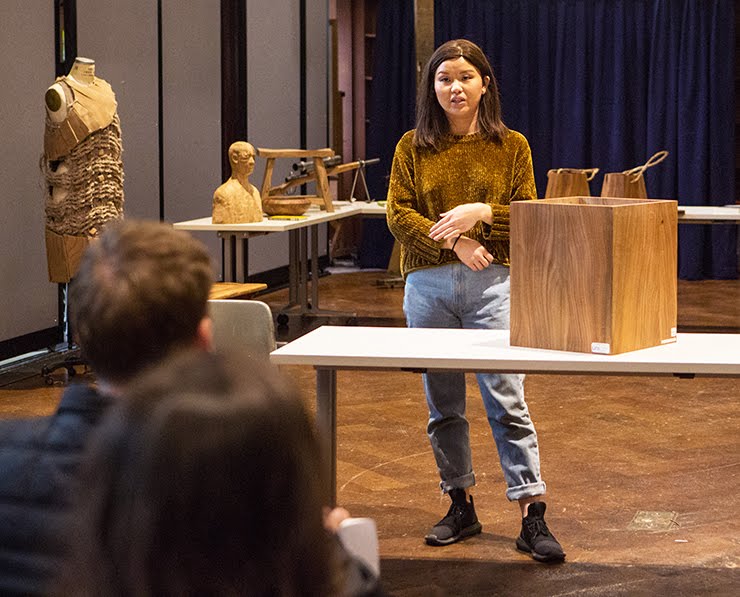 Each spring students in an unusual cross-disciplinary course get the opportunity to build meaningful objects using wood from historic “witness trees” that have either fallen in national parks or needed to be felled by the National Park Service. Dale Broholm, a senior critic in Furniture Design who is co-teaching the Witness Tree Project this spring with Dean of Liberal Arts Dan Cavicchi, developed the original concept for the research-based studio, which is offered jointly through the Furniture Design and History, Philosophy, + the Social Sciences (HPSS) departments.

“Students interpret the history that the tree has witnessed, make relevant objects from its wood and then show their work in a public exhibition,” Broholm explains.

This year’s class—dubbed The Politics of Belonging: Race, Diversity and the Immigrant Experience in Brooklyn and Beyond—centers on one of the first trees planted in Brooklyn’s historic Prospect Park. Students used the gnarled wood of an ancient elm that witnessed more than 150 years of immigration into the US via Ellis Island. They considered the concepts of home, adaptation and belonging in determining how best to make use of the precious hardwood from the historic tree.

“Many students explored their families’ immigration experiences,” says Broholm. For instance, Brian Skalaski 18 FD, a junior of Polish descent, created a sawed-off nameplate symbolizing how the names of many Eastern Europeans were shortened and modified by immigration officials when they arrived in America.

Instead of focusing on Chinese immigration, junior Stephanie Tan 18 FD—who is completing an HPSS concentration in Gender, Sexuality and Race—took the opportunity to comment on the soaring rates of incarceration among African-American men. Her research turned up federally funded prison labor programs that she believes amount to post-13th Amendment slave labor. Most of these prisoners’ ancestors were forced to emigrate from Africa via slave ships, she points out, and the population has never fully benefitted from the rights and freedoms of American citizenship.

One of the popular items built by prison laborers is the Baritone Trash Can, which retails for over $100. Tan used the product’s specs to create her final piece, which is inscribed with the words of the 13th Amendment inside. When she presented it at her final crit in mid May she filled the bin with crumpled mugshots of African-American convicts. “In my opinion, the power of your message is not fully realized via the paper mugshots,” Broholm offered at the crit, “but the geometry of the form is very seductive.”

Sophomore Daniel Icaza Milson 19 ID, who was deeply disturbed by the recent executive order attempting to ban immigrants from seven majority-Muslim nations, presented another beautifully crafted but more interactive piece. He considered how the travel ban might affect a new immigrant’s sense of belonging and responded with a series of wooden kaleidoscopes that provide sickeningly distorted views of the text spelled out in the executive order.

“I chose to bleach the wood so that viewers are in effect seeing the document through a lens of whiteness,” Milson explained to fellow students, faculty members and guest critics as they took turns peering into his kaleidoscopes.

“The difficulty in finding the proper focus through the lens,” Broholm noted, “also seems to reflect the fine line immigrants are forced to walk as they adapt to changes in the law.”

Milson and his peers are currently putting the finishing touches on their pieces in preparation for a September exhibition of the work produced in this year’s Witness Tree Project class at the Lefferts Historic House museum in Prospect Park.

Work by students in this spring’s Witness Tree studio is being exhibited at the Martin Van Buren National Historic Site in New York state.