Charting a Course to Clean Energy 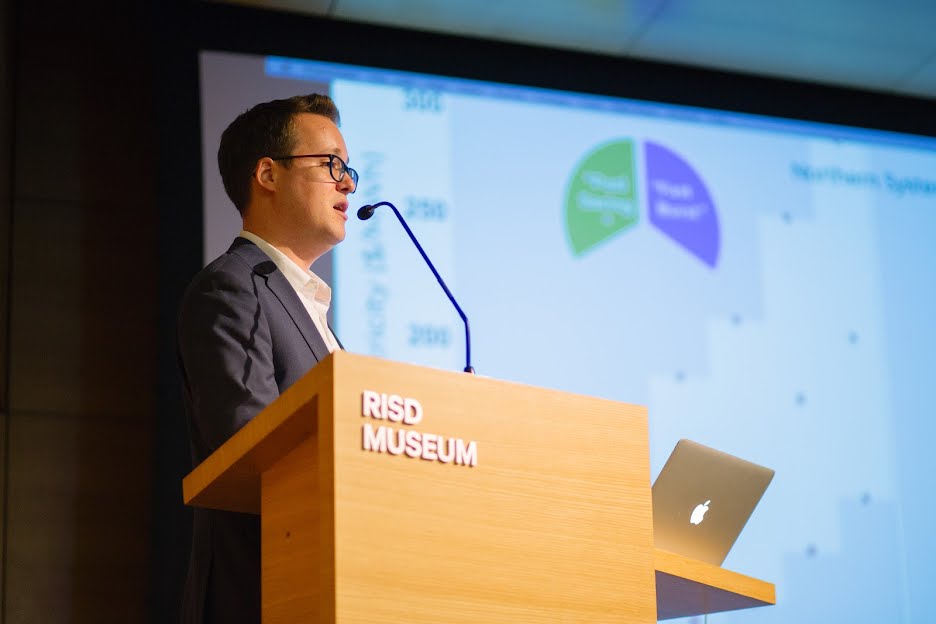 Visiting scholar Jesse Jenkins made a clear case for nuanced approaches to “decarbonizing” electricity production around the world.

As part of RISD's new master's program in Nature–Culture–Sustainability Studies (NCSS), students in the RISD/Brown seminar Climate Futures and a Sociology of Just Transitions are examining some of the most urgent—and complex—questions of our time. What social, political, economic and technological obstacles stand between humanity and a path to clean energy? How can people bring about environmental change that is both effective and fair to communities all over the world? And what opportunities are there for scholars and designers to make a sustainable future?

These questions were at the core of Getting to Zero, a talk presented by visiting scholar Jesse Jenkins on September 26. In it he urged that not only is action immediately necessary, but that designers, technologists and everyone else invested in combatting global warming need to consider every possibility and treat the problem with the complexity it requires.

Part of a series highlighting the range and depth of inquiry in both the NCSS MA program and the Global Arts and Cultures one forthcoming in fall 2019, Jenkins’ talk outlined a holistic approach to decarbonizing electricity in the long term. The environmental fellow at the Harvard Kennedy School noted that good progress has been made toward cleaner energy systems but that “we must keep bending the curve upward to stay on pace globally” with the 2015 Paris Agreement. He also argues that despite ongoing political obstacles, there is a viable path forward: for instance, investing in wind and solar technology has become increasingly more affordable in recent years.

However, Jenkins also cautions that the world is not yet ready to “put all of our chips behind [a single source of] renewable energy.” Rather, a hybrid approach would be most effective—one in which energy created by sun, wind and (for the time being, at least) coal and nuclear power is harnessed and stored efficiently. Relying on a single source, he points out, “is like trying to play basketball with a team of just point guards: you can put points on the board, but you would lose every time to a team that has its players in the right positions.” And, the scholar emphasizes, renewable sources will need to be “pushed to the limits” in order for them to be placed at the center of a clean energy system.

In the Q+A that followed, Jenkins acknowledged that the challenge for people currently working in the field isn’t actually getting to zero emissions, but simply establishing a system that makes it possible for the next generation to do so. In this, he sees innovative design as a great opportunity to reshape how people use energy. From creating smart home technologies to coherent systems for safe city biking, he believes that designers can play a critical role in easing the path toward sustainability.

In closing his talk, Jenkins reiterated that overcoming political and economic obstacles to clean energy requires exploring all possibilities and exhausting all options. “We need strategies that are robust [because] we live in an uncertain world—and we cannot afford to fail.”

Now back in her home country, alumna Mudita Pasari MA 17 is using her design expertise to promote sustainability and environmental awareness.