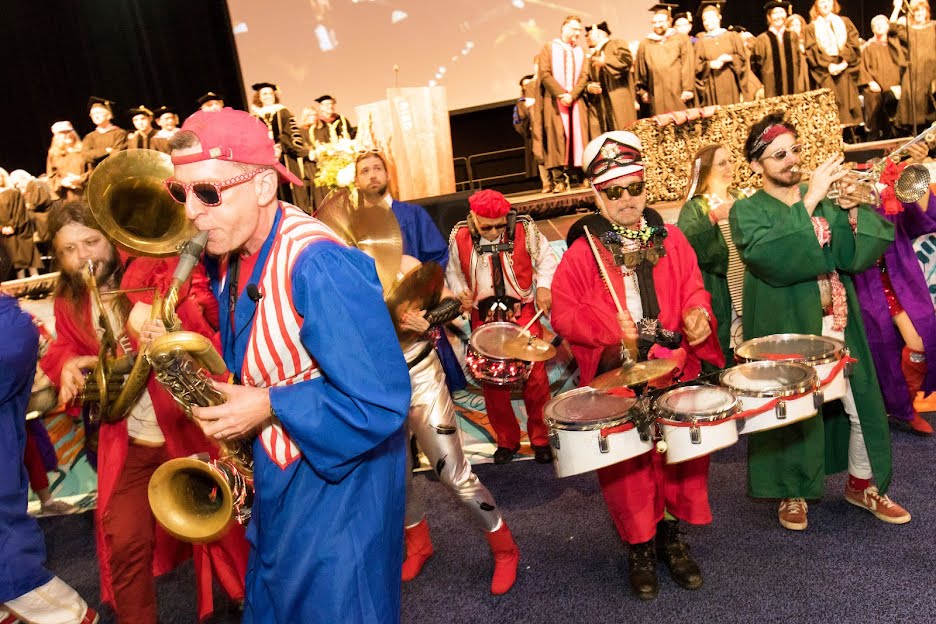 At RISD’s 2017 Commencement ceremony, keynote speaker Brian Chesky 04 ID urged 726 new graduates to go out into the world with confidence in what they’ve achieved—and conviction in what they are about to accomplish. Despite the “rather large problems” of these uncertain times, “you can design the world you want to live in,” the cofounder and CEO of Airbnb told the 488 bachelor’s degree and 238 master’s degree recipients.

In delivering the keynote address on Saturday, June 3 at the Rhode Island Convention Center, Chesky reflected on the day he graduated from RISD 13 years ago—when he stood before the crowd then as student speaker for the Class of 2004. “I had a lot of questions racing through my mind. ‘Would I find a job? And would I do anything significant with my life?’” Within four years he would go on to cofound an extraordinarily successful global business that is in many ways a model for success in the 21st century.

“At RISD I learned that when you have a problem, no matter how challenging… just take the first step,” Chesky affirmed. “Take enough of these steps and anything is possible,” said the entrepreneur who collaborated with fellow grad Joe Gebbia 05 GD/ID and a third business partner in establishing Airbnb as an innovative way to bring people around the world together through community-based travel experiences and allow them to become micro-entrepreneurs in their own right.

Both Chesky and Gebbia earned honorary degrees at Commencement, as did designer Christina Kim of dosa—which is committed to producing sustainable products—and accomplished painter Kehinde Wiley, whose nuanced portraits of people of color are on view at major museums around the world. Taken by the joyous atmosphere at the ceremony, Wiley offered a few impromptu words of encouragement to the graduating class. In art, he said, “sometimes when you nod toward things that are absent, the world smiles back. You all have that in front of you—and I look forward to seeing it.”

In her address, President Rosanne Somerson 76 ID asked graduates to seize the opportunity to “help others make sense of these tough times” through acts of creativity. “You have incredible ability and power to influence now,” she said. “Become the person that others admire.”

Other honorees included cartoonist Roz Chast 77 PT, who accepted the Alumni Award for Artistic Achievement in acknowledgment of an extraordinary body of ongoing work that includes brilliant cartoons for The New Yorker and her moving graphic memoir Can’t We Talk About Something More Pleasant?

Olivia Stephens 17 IL, co-president of the RISD student organization Black Artists and Designers (BAAD), earned the Steven Mendelson Award for Community Service for her tireless work in helping to lead the call for equity on campus. Provost Pradeep Sharma saluted this year’s recipients of the John R. Frazier Award for Excellence in Teaching: Associate Professor of Painting Kevin Zucker 00 PT, who won the accolade for full-time faculty members, and Tom Roberts, a senior lecturer in History, Philosophy + the Social Sciences, who took the 2017 award for adjunct faculty members.

While senior class speaker Emily Moenning 17 TX asked her peers to look inward and “consider the things that made us” – and not just the things they made – during their years at RISD, graduate student speakers Atulya Chaganty MID 17 and Anina Major MFA 17 CR compared the role of artists and designers to Scheherazade, the fictional queen in the One Thousand and One Nights tale who staves off execution by capturing the king’s imagination. “Here at RISD,” said Major, “we’re all Scheherazade. We are captivating storytellers who use our stories to create empathy and understanding of different perspectives through art and design.”

In summing up the reflective spirit of the day, Chast admitted to “mixed feelings” about her experience at RISD more than 40 years ago, when some wrote off her passion for cartooning as less than serious or worthy. “But even though no one seemed to care about my cartoons,” she recalled, “I still wanted to do them…. So I’m begging you,” she urged graduates, “if you are doing some art thing that you love… because you can’t not do it, please, please, keep doing it.”