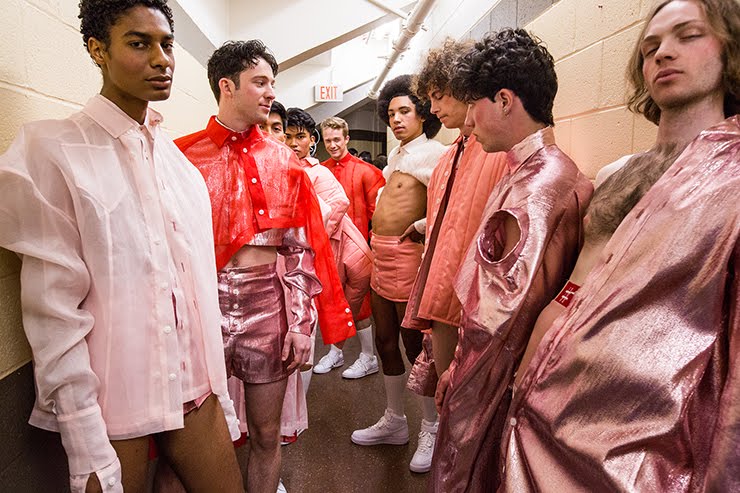 Models wearing a collection by Noah Pica 17 AP prepare to hit the runway.

“I am extremely pleased with Saturday’s show,” says Department Head Neil Gilks. “The seniors’ work highlights their diverse design approaches, combined with the integrity and high standards of execution RISD’s Apparel Design department is known for.”

Aiala Rickard 17 AP, a native of Hawaii, presented an homage to 1960s fashion complete with wide headbands and round, white sunglasses. Her collection includes everything from swimwear to short, flirty dresses to long, straight skirts and features asymmetrical cuts, bold stripes and other sporty details.

Locally grown talent Jamall Osterholm 17 AP also showed an exceptionally consistent line, outfitting his male models in outlandish down creations, a fresh take on dress pants and some daringly low-cut looks. “I am looking at contemporary black culture as a descendant of slave culture—a descendant of African culture—and following that lineage to discover a fully realized Afro Alien race,” the designer explains. “My collection plays off of contemporary black dress in an attempt to challenge stereotypes of modern black men as hyper-sexual, hyper-masculine and hyper-aggressive.”

Rachel Yoo 17 AP incorporated down into her menswear collection, too, as well as long, structured outerwear pieces integrating a subtle mix of fabrics and textures. The looks, she says, are intended to highlight “contradictions between what is revealed and what is concealed.”

On the womenswear front, backs, breasts and even buttocks were on parade, sheathed in long flowing skirts, classic sleeveless jumpsuits and ultra-wide-legged pants. Redat Davison 17 AP stuck to basic black with subtle crimson details and long, belled sleeves. Models wearing Lucille Crelli 17 AP creations hit the runway barefoot in flowing purple chiffons and complicated twisted tentacles meant to critique the recent presidential election in the US. “Featuring corset boning as a restrictive force acting upon the wearer,” Crelli says, “each of my looks addresses a pressing concern about the current administration.”

Paige Ryan 17 AP showed as much attention to detail in the fabulous shoes her models wore as in her elaborately conceived collection. Decked out in futuristic makeup and painted-on socks, her models stepped onto the runway wearing a combination of polka dots, pom-poms, fringe and multicolored fur. Reira Saito 17 AP also plays with pom-poms and feathers in her collection and worked her fabrics so intensely that they almost look pixelated on the runway.

In stark contrast to Ryan’s shimmering sheers and Saito’s cheerful checks, Abigail Griswold 17 AP used muted tones and structural fabrics like neoprene as well as diagonal cuts and curved seams to create her unique collection. At the show her looks were juxtaposed with a colorful collection of womenswear designed by Maya Samach 17 AP, who wowed viewers with red, neon yellow and Pepto-Bismol pink as well as long, pointed crystals and other unexpected embellishments that reference her exploration of female sexuality and environmental toxicity.

Most of the work shown at Collection 17 will surface again when graduates bring their work to New York Fashion Week in September. Several students will also present their collections at various venues later this spring. Osterholm will represent RISD in London at an international runway show during Graduate Fashion Week, and in late May several other student collections will be showcased in NYC by the Council of Fashion Designers of America (CFDA).

Collection 16 Has It All

Ready for the Runway

The public will get to see a juried selection of the best work made by RISD’s up-and-coming apparel designers at Collection 2015.

Small-town dreamer Vaughan Carman 18 AP thanks the RISD community for awakening him to a world of possibilities.