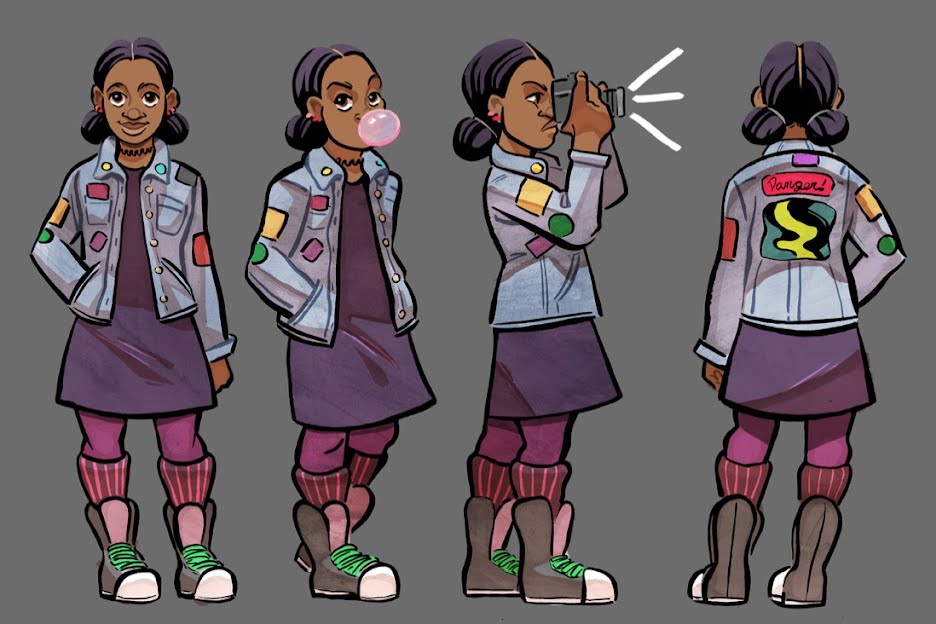 Artie is the protagonist in a new book in progress (by the same name) by comics artist Olivia Stephens 17 IL.

Recent graduate Olivia Stephens 17 IL has been living and working in Tulsa, OK since the beginning of the year, where she’s the youngest person ever to earn a Tulsa Literary Artist Fellowship. Having grown up near Seattle, the comics artist is working to complete her debut graphic novel for young adults about a teenager in the Pacific Northwest who uncovers a dark family secret. Here Stephens talks about her process, her growing interest in comics and how a specific Illustration class at RISD inspired her current path.

How did you end up in Oklahoma?
After RISD I moved back to my parents’ house outside of Seattle for a year and a half and did freelance comics stuff, drawing for writers. That was my gig.

I had recently found out that Lerner Books was interested in publishing my graphic novel when my application for the Tulsa fellowship was accepted. So, it all came together at once.

What’s the draw of the fellowship in Tulsa?
Hundreds of artists and writers applied and 60 of us were accepted: writers, curators and painters from all over. We’re living and working together in downtown Tulsa for a year and the fellowship covers housing, studio space and a $20,000 stipend. It’s been really great.

And how did you manage to find a publisher so soon after graduation?
I started the pitch for this book as a senior at RISD. An editor at Scholastic Books had seen my web comic and invited me to send something, although in the end he passed on the book.

After graduation I focused on finishing the art and sent it off to different agents. Once I got an agent, we sent the art and a sample script to a bunch of publishers—and after that it was just a waiting game.

Can you tell me a bit about the story and the inspiration behind it?
It’s about Artie, an independent girl living with her mother in rural Oregon who likes to go out and photograph nature. Her mom is a widow, and her dad died before she was born. So a significant part of the story is her dealing with the loss of someone she never knew. One night she sneaks out to photograph the full moon and discovers that her mom is a werewolf.

And Artie is African-American, right, like most of your characters? I understand you made a conscious decision to feature people who look like you?
I love writing about people of color living in the Pacific Northwest because that’s my life. When people think about [that region], they’re not thinking about the 6% of us who are black. I like writing about the minority.

Is it true that you originally got interested in comics through your father?
My dad put comics on my radar. He was a huge DC fanboy, so he understood why I liked comics. But I’ve always liked different things than him: manga, independent comics, European comics.

When did you first start making your own comics?
I got my start reading Japanese comics with my friends and kind of imitating those drawings. I started my first original comic when I was 13, but drew like 70 pages of it before I gave up.

What motivated you to keep going and apply to RISD?
I applied to a bunch of liberal arts colleges and decided to apply to RISD at the last minute. It was RISD or bust in terms of art schools. I figured if I got in there, it was something I should do.

And did you already know what you wanted to focus on artistically?
I had already decided to major in Illustration before I came to RISD, but I was waffling on whether or not to focus on making comics.

That all changed when I took a Wintersession class with Kikuo Johnson 03 IL. He broke down the language for me so that I could understand why certain things were working in my comics and others weren’t. And once I saw that I could finish something, I was all in.

Are your parents supportive of what you do?
My dad is pretty practical and pragmatic, so I had to convince him about RISD. But my mom has always loved my doing art.

When I was four years old, I gave her a picture I drew of the house on [the animated kids TV show] Blue’s Clues and she burst into tears! It’s still up in our house.

Whenever I’m developing something new and I’m not sure about it, I’ll run the idea by her. If she likes it, I‘ll go forward with it.

How do you translate an idea into an actual comic?
I always start with the story. And then I do character designs and sample pages before I start writing the script. Once the script is final, I’ll develop rough thumbnail sketches of what I want each page to look like.

I’m kind of odd because I draw digitally on my tablet, print the sketches out in light blue, ink them traditionally with a brush and then scan those ink drawings into the computer and color them digitally.

There’s no control-Z option when you’re working in India ink, and I like that sense of permanence when I’m finishing the pages. It’s like placing trust in my own hand.