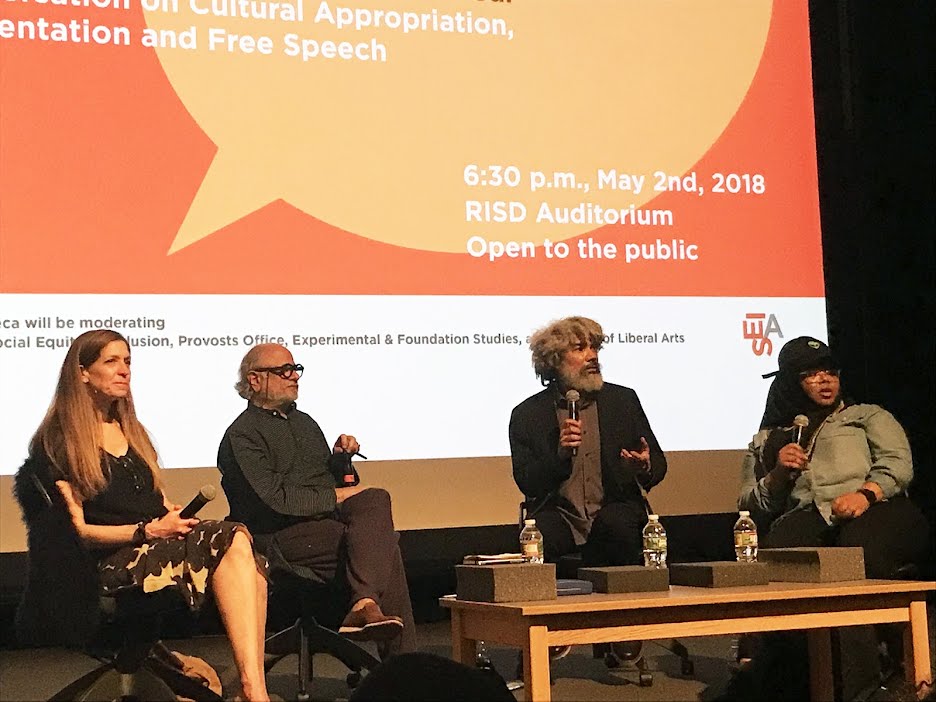 Groundbreaking artist Fred Wilson, postcolonial scholar Homi Bhabha and interdisciplinary artist and writer Kameelah Janan Rasheed drew hundreds of students, faculty and staff to the RISD Auditorium on May 2 for a deep dive into the issue of cultural appropriation. Organized as part of RISD’s Social Equity and Inclusion initiative, the timely discussion was gracefully moderated by HAVC Department Head Leora Maltz-Leca and sponsored by the Provost’s Office and the divisions of Liberal Arts and Experimental & Foundation Studies.

Wilson opened the discussion on a personal note, explaining that understanding his own work as a conceptual maker is a lifetime pursuit. “Art is an imperfect tool for communication,” he pointed out, “because it reaches people on many different levels. And the notion of speaking for ‘your people’—speaking for a group rather than as an individual—is inherently fraught.”

Picking up on this idea, Rasheed noted that when artists create work it often reveals unexpected things about themselves or reflects on other people and other histories in ways that may come as a surprise. “Definitions are always evolving,” she said. “What’s important is how you come back from these ‘mistakes’—by taking advantage of the moment to start a conversation.”

Given “our appalling times and the politics of degradation,” Bhabha added, there’s a heightened sensitivity to notions of cultural appropriation. “But mis-translation and mis-appropriation can be important to the creative process.”

Maltz-Leca likens modern-day tweetstorms about artists who have crossed the line (like white painter Dana Schutz, whose depiction of Emmett Till in the 2017 Whitney Biennial stirred up heated protest) to similar arguments from decades ago about who can claim cultural rights to blues music or African-American fashions like cornrows. “What these forms seem to have in common,” she says, “is that they came out of a certain set of socio-political circumstances.”

Rasheed pointed out that Schutz’s mistake wasn’t in her heartfelt empathy for Till’s mother but rather her lack of preparedness for the firestorm her work precipitated. “As an artist, you are responsible for understanding what you make,” Wilson agreed. “Perhaps she should have let the painting rest for a while before showing it publicly.”

Bhabha disagreed, suggesting that it’s not the artist’s place to anticipate how people will react to their work and that such expectations can lead to self-censorship. Maybe the whole point is to generate rage and use it to move the dialogue about privilege and racial equity forward, he posited.

“Is the role of RISD and other educational institutions to turn student rage into something constructive?” Maltz-Leca wondered aloud. “School is where we learn to engage, and generative conversations are important,” Rasheed responded, “but I don’t think I have the right to police the way people express their emotions. Whose comfort is prioritized?”

This question is central to Rasheed’s recent work exploring blackness, citizenship, belonging and temporality. Pieces like How to Suffer Politely (And Other Etiquette) and Selling My Black Rage to the Highest Bidder (see images, below) focus on questions of tolerance, anger and the social hierarchy.

“We live in a culture of outrage, some would say, but we have to think about the issue in terms of power,” Maltz-Leca pointed out. “Should we be more tolerant? Is tolerance itself a privilege?”

A student questioned whether institutions like RISD should shoulder some of the responsibility in helping to discuss and better understand the impact of white privilege on people of color. “Is it the role of the victim to educate others in the classroom?” she asked.

“Classrooms are emotional spaces,” Bhabha responded, “and a sense of anxiety means that the class is working. We all need to do more emotional labor and bring our traumatic histories into the discourse.”

Watch a video of the entire panel discussion, A Conversation on Cultural Appropriation,
Representation and Free Speech, on Livestream.