Continuing the Conversation in Doha

Farah Altaweel MA 17 talks about transitions and her unconventional approach to combatting #fakenews. 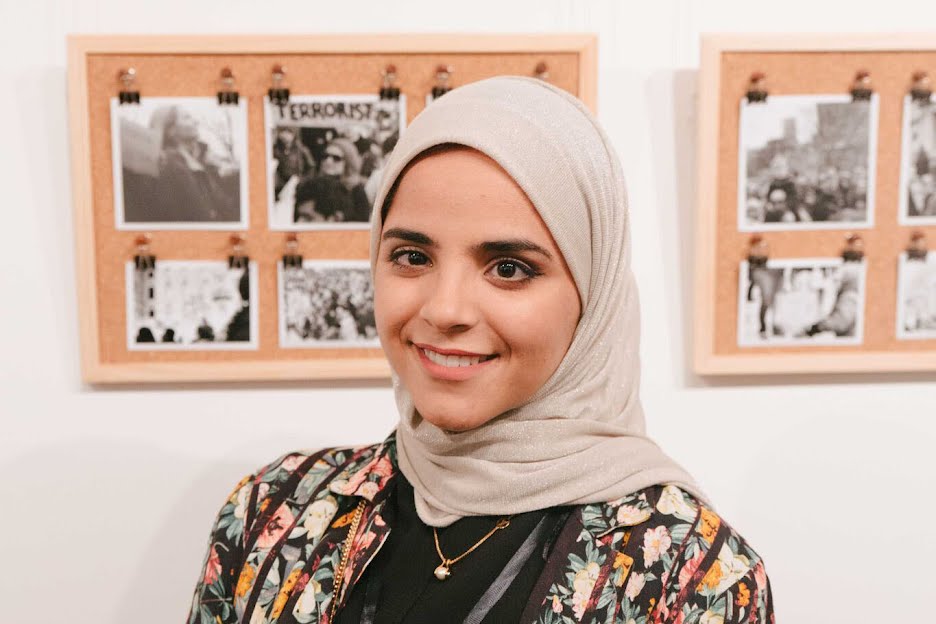 After graduating from RISD’s one-year master’s program in Art + Design Education, Farah Altaweel MA 17 moved back home to Doha, Qatar in June—just as an ongoing diplomatic crisis was beginning to embroil the Gulf region. At the same time, her professional life got a jumpstart: she participated in an exhibition featuring work by emerging Arab artists at the Reconnecting Arts gallery in London and was promoted to a new position at Qatar Museums (where she worked prior to coming to RISD). Here Altaweel talks about transitions and her unconventional approach to combatting #fakenews.

What did you exhibit at the recent show in London?
I took Jenny Edwards' photo class at RISD during Wintersession and for one project we were asked to develop a series. This was around the time of the demonstrations at the [RI] State House against Trump’s first travel ban. I had never been to a protest before, but I wanted to go and observe and I brought my camera along. It was interesting to see people from different backgrounds standing together and to see Muslim people being community leaders—something that’s not often captured in the media.

I spent a lot of time looking through the viewfinder and began to work with the frame in a funny way. I found I could make protest signs say the opposite of what they meant—like a hijabi woman who held a sign that said “I am not a terrorist.” I could change her message by cropping the image. In the darkroom I was able to further change angles and heighten shadows to make the images more dynamic. When everyone in class encouraged me to take the work further, I submitted a proposal for the exhibition in London.

The images represent a personal transition: transitioning to a place where I’m a foreigner, transitioning from designer to artist and back. And even though the protests happened in January, the work is still current because of the Gulf crisis—fake news is playing a role in our lives in Qatar as well. It was interesting to try to resurrect this conversation and apply it to a different region of the world.

What was the reaction to the work?
During the show someone said to me, “This is powerful. You’re teaching in an unconventional way.” I hadn’t considered that. But the comment was validating. I’m really invested in education and advocacy, and it made me feel like I’m not limited in terms of medium when it comes to creating educational projects.

What did you learn from the experience?
Before I felt like an observer. Now I feel it’s my responsibility to participate in the conversation, whether it’s about religion, politics or feminism. When fighting against fake news, it’s important to remember that we have the freedom to be critical but we need to be knowledgeable as well.

People often lack context or knowledge. They preach. We might be victims, but we should not victimize ourselves. We should work to collect better sources.

Regardless of the context, this was the first time I really felt like an artist. For so long I’ve seen myself as a “traditional” designer— someone who works with a client to deliver a product. This taught me how art and design can co-exist. I had more control over material, over choices. It made me believe in myself and my ability to use other mediums. I even wrote an essay about the experience for v.1 (RISD’s graduate student publication).

What surprised you most about RISD?
How chill everyone is! I was really nervous when I started. I was anxious to make sure I was always in the right place at the right time... you know, holding the right amount of books, the right pens. I didn’t want to waste the opportunity. But I discovered that at RISD everyone understands that each student is different. My classmates and I appreciated the differences in each others’ directions and backgrounds and we invested in learning about each other.

Did anything surprise you about the US?
I was surprised by the way people involve themselves in other cultures—how they’re always trying to know more about them. I was naive about some things that are happening in the States. People are more aware than I expected. It feeds into what my project deals with: the idea that what you’re told is not necessarily what is true.

Why did you want to get a graduate degree abroad?
Personally, I wanted to try to be flexible—to actually go for a walk down a city street, try a life that’s really different from what we have in Doha. When I was an undergraduate student at Virginia Commonwealth University in Qatar, three of my professors (Michael Hersrud MFA 06 GD, Law Alsobrook MFA 05 GD and Levi Hammett MFA 06 GD) were RISD graduates, so I always had it in the back of my mind as a goal.

After working for some time I realized I wanted to be more involved in education—to connect design and education. I wasn’t sure if they could be combined. When I found the TLAD program, I knew it was where I wanted to end up. I liked the length of the program—one year was a perfect amount of time to be away. And I looked up the cohort and saw that [Professor and Department Head] Paul Sproll had worked with Qatar Museums [QM]. He could understand where I was coming from and knew about the culture of Qatar. I knew that would be helpful.

And you now have a new job?
My new title is 2D Coordinator. When I started with QM, I was a graphic designer in the education department at the Children’s Museum. I worked on outreach to engage local families. It was marketing, making deliverables. Now we’ll be redeveloping a visual identity for the Children’s Museum in-house and I will be in charge of making sure that whatever content is being made is consistent with our visual brand.

How do you think you'll be able to incorporate what you learned at RISD into your work at QM?
When I was researching my thesis I got to interview people who worked for educational and cultural institutions in Qatar. That was enlightening because I was able to learn so much about the professional culture I was going back to after graduation. I became better at reaching out and establishing connections. I also gained confidence in my eloquence regarding projects. I’m definitely better at articulating my ideas.

The opportunity came at a really good time. It’s always been my intention to work in design and education simultaneously and coming back to start this work with the museum gives me the chance to apply and expand upon what I’ve learned over the year. It’s a continuation.

After earning a Somerson Scholarship, graduate student Sanié Bokhari MFA 18 PT is able to evolve her artistic voice by commenting on her experiences as a Pakistani living in America.

Iranian grad student Arghavan Khosravi MFA 18 PT responds to the polarized political climate in the US with a very personal point of view.