Contributing to the Greater Good 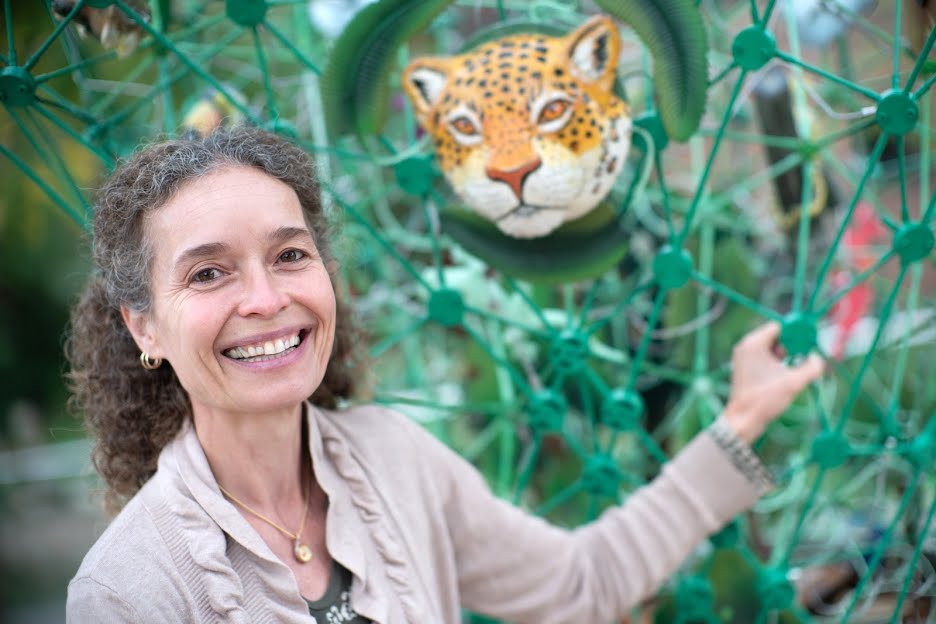 Artist Marly Rogers 90 PT recently completed a collaborative installation for the Faces of the Rainforest exhibit at the Roger Williams Park Zoo in Providence.

“The rainforests of South America offer us inexhaustible inspiration,” says Rogers, “but not inexhaustible resources.” Together she and Hatcher brainstormed ideas for creating a piece that would spark conversations among families and other zoo visitors about the fragility of one of the world’s most precious resources. Comprised of three tree-like columns wrapped in circular seating, Canopy offers a cornucopia of 2- and 3D flora and fauna pieces created by Rogers.

“We’re both animal lovers and were really happy to get this commission,” says Rogers. “When we met with the folks at the zoo, they helped us select specific animals to include, like the leafcutter ant and giant otter.”

Rogers—who has collaborated with Hatcher on numerous installations since 2009—fabricated most of the animals for the piece out of clay. “I majored in Painting at RISD but did a lot of work in clay and glass as well,” she explains. “So I was really excited to get back into clay for this project.”

After extensive study of photographs of rainforest creatures, Rogers began creating hollow forms or tubes out of clay, which gave her the essential the building blocks needed. “I discovered that I could make anything out of them,” she exclaims—“from tree branches to animal torsos, tails and legs.”

Since Canopy was unveiled in November, pedestrians passing beneath the colorful bower have paused to take note of the intricate details. “I like to make new worlds,” Rogers explains, “and part of that is revealing the beauty of this world. There are so many animals on the endangered species list. I hope that our work promotes greater understanding and gets people talking about how we can be better caretakers of animal habitats.”

For another collaborative project, Rogers connected with fellow alumni and other local artists to create a sculpture called Cosmic Flower for Kennedy Plaza in downtown Providence. Commissioned by the arts organization The Avenue Concept (headed by Yarrow Thorne 11 ID and co-managed by longtime Mid-Ocean partner Brian Dowling), the piece is made of painted steel—“the kind of reflective metal they use in STOP signs,” Rogers explains, meaning that passing headlights bring it to life.

“We went to The Steel Yard and wrapped the whole thing in strips of vinyl and made reflectors to go into the vertexes,” Rogers says, adding that this kind of creative venture is what makes Providence such a great place for artists. “There are RISD people everywhere,” she says, “and the possibilities are endless.”

Seeing the Forest for the Trees

Landscape architect Phoebe Lickwar MLA 06 reflects on two recent collaborations and a rewarding design approach she developed as a student at RISD.

Illuminating the Art of Co-Existence

An interdisciplinary exhibition on view this summer in RISD’s ISB Gallery brings artists and scientists together to promote conservation.