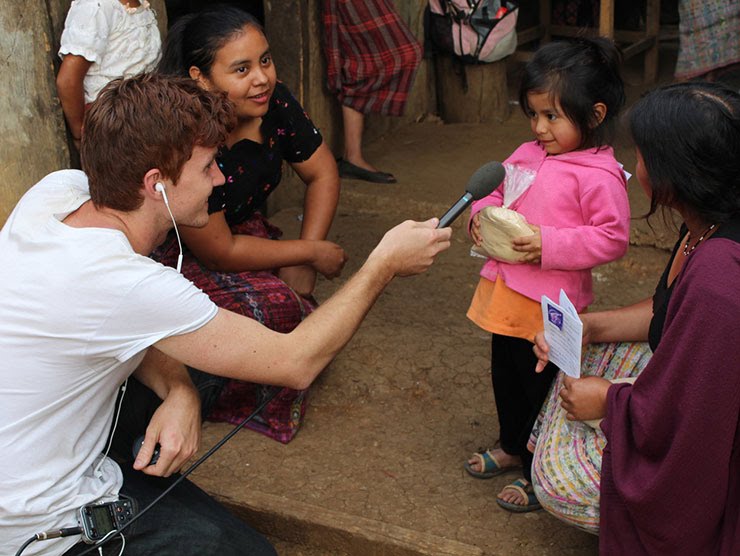 Of the hundreds of things Otis Gray 14 SC made as a Sculpture major at RISD, one of the most momentous was a seemingly simple chicken dinner. “I honestly had never cooked anything until I got to college,” he recalls, “so that first real meal I made was eye-opening. I realized right away that I had started something I wished I had done a long time before.”

Now Gray is pursuing his obsession with food from a different vantage point—telling the stories behind the things we eat. Since last year he has been sharing them via Hungry, a DIY podcast that explores connections between food, history, politics and identity—“the bigger picture of human experience,” he says. In this year’s season, he has tackled the debates surrounding immigration and the Syrian refugee crisis, taken listeners to a restaurant called Trump Café in rural Texas and, most recently, featured an innovative lettuce farm in the middle of Appalachia, along with a brief conversation with Bernie Sanders.

“Just like your creative process, you’ve got to let your life after school grow organically,” says Gray. “That can take you to some really cool places.” Once the idea to study culinary cultures began to take shape during his senior year, he applied for a Fulbright to research food and sculpture in Lima, Peru. Though he didn’t win the grant, he was able to fund the trip anyway, thanks in part to a RISD parent who bought one of his sculptures over Commencement weekend.

Traveling to Peru without strings attached was “completely liberating,” says Gray, who happily immersed himself in the country’s culinary traditions. Soon after he returned, he took a job in a Philadelphia-area bronze foundry, where he discovered the allure of listening to podcasts to make it through tedious 11-hour workdays.

Gray’s interest in the accessibility of the medium inspired him to save enough to quit that job and buy the best sound recording equipment he could. Strapping his microphone to his belt loop, he then walked into the “killer food scene” in his South Philly neighborhood, confident that plenty of people in the area had good stories to tell.

Gray has since relocated to Brooklyn and now works in a fashionable restaurant in the Chelsea neighborhood of Manhattan, where he enjoys “asking the chefs probably way too many questions” about their craft. Working in the NYC restaurant scene has also helped him take Hungry in exciting new directions. Through a fortuitous encounter with renowned chef Dan Barber, he connected with and earned a grant from the New Mexico-based Owl Peak Farm Foundation, support that has helped him to travel outside the northeast in search of even more diverse points of view.

For Gray one of the biggest challenges of podcasting is how to turn good interviews into compelling audio narratives. “Podcasts like This American Life make it sound easy, but [production] is such a grinding, slow, difficult process—especially when you’re doing it on your own like I am. It takes so many hours to do it well.” He credits the work ethic and creative process he learned in the studio with helping him power through the growing pains of learning to work in an audio versus visual medium and to tell strong stories verbally. “RISD taught me that you can do anything—it just takes time and making a shit-ton of mistakes to get there.”

Instead of starting with extensive background research and story outlines, Gray prefers a more fluid or ad hoc approach, building podcasts “from the ground up.” Take Shawarma, an episode that begins with a Syrian restaurant in Allentown, PA, known for its traditionally prepared grilled meats. As the story inevitably veered towards how Syrian-Americans feel about both the ongoing war in their homeland and refugees seeking a safe haven in the US, Gray suddenly realized he’d need to do weeks of reading to become fully informed. “I quickly realized the story required me to be a journalist—which I’m not. But I now know that if I’m going to make an episode about politics I have to know what I’m talking about.”

Of course, getting a new venture like this off the ground takes time and patience, especially since building an audience is challenging in our media-drenched world. But Gray is nonetheless thrilled with the feedback and support he has received for the blend of food talk and social commentary that makes Hungry so satisfying. And getting the Owl Peak Farm grant has also allowed him to bring fellow alumni into the mix for season two.

“At RISD I met insanely talented people who I want to involve in whatever I do,” Gray says of artists like Jia Sung 15 IL, who has created covers for Hungry episodes like Trump Loaf, the story of the Palestinian-owned Trump Café in Bellville, TX, as well as the newest episode, which highlights the efforts of farmer Joel McKinney to bring hydroponic agriculture to his native West Virginia.

Five Loaves and Two Fishes premiered on May 3, as did a related essay Gray wrote for the digital magazine Narratively (where his friend Vinnie Neuberg 13 IL works as an illustrator and editor). “I spend so much of my time alone editing the show that some human validation is necessary once in a while,” he admits. And with the help of friends at Narratively, the podcaster was able to arrange a short interview with Senator Sanders about McKinney and the potential for his work in coal country.

Although Gray still fills his sketchbooks with subway drawings and sketches of strangers, he doesn’t make time for 3D making these days. “I would really love to get dirty [in the studio] sometime, but I have no regrets about not going into sculpture just now.” This year and for the foreseeable future, his passion lies in using food to build bridges in an increasingly polarized society. “The world is so batshit insane right now that we really need to sit down and listen to one another,” he says. “And I really believe that best happens over food.”