Designing a Refuge for Contemplation

As part of the department’s annual charette, students in Interior Architecture work together to propose quiet campus refuges. 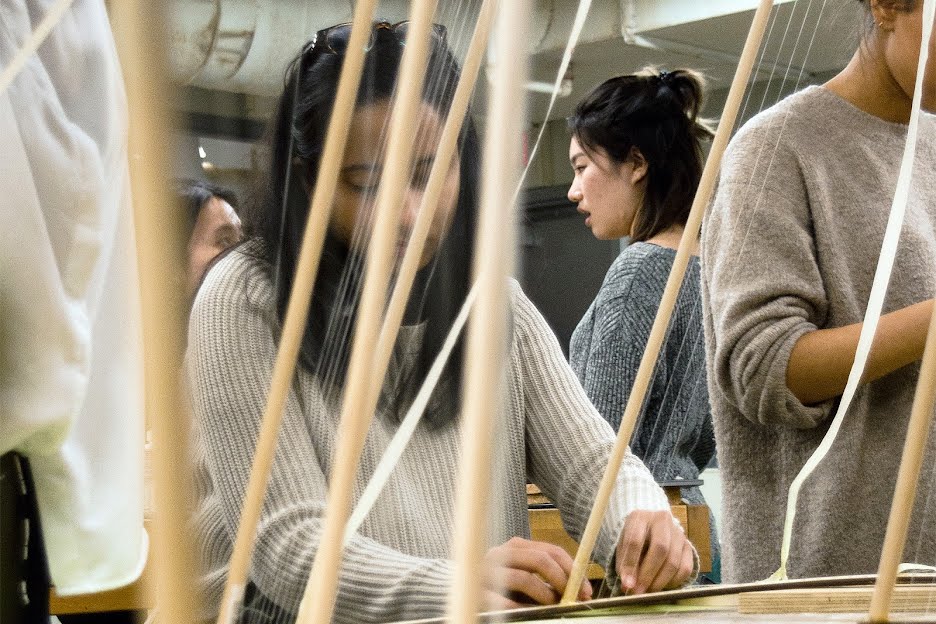 Eleven teams of Interior Architecture students worked together over the course of five days to design quiet spaces for introspection.

Participants in this fall’s department-wide Interior Architecture charette worked in teams and with intense focus to design spaces of refuge where students can retreat and regroup through meditation and contemplation. With the Fleet Library at RISD chosen as the site for the departmental intervention, Interim Dean of Libraries Margot Nishimura told students that the space serves as an important community hub that would be perfect for a series of small, portable reflection rooms.

Eleven teams of Interior Architecture students—both grad and undergrad—responded to Nishimura’s prompt by working together to design and build models of proposed portable refuge spaces within the span of five days. At the end of their intense week, members of the campus community were invited to the Center for Integrative Technologies to examine the concept posters and 3D models and then cast a vote for the winning proposal.

“There were interesting similarities among the projects this year, reflecting on our commonality of experience,” notes faculty member Janet Stegman BArch 78. “For example, a lot of teams incorporated linearity or let light come through in intriguing ways.”

Stegman’s colleague Elizabeth Debs, who helps organize and develop a new focus for each competition, points out that this year teams were particularly good at collaborating, communicating and parceling the work out evenly.

The annual charette, she adds, is an opportunity for students at all levels to experience the intensity and time constraints that frequently govern professional RFPs (requests for proposals) in the architecture fields. Responding to such design challenges requires nimble thinking, cohesive teamwork and the ability to present ideas coherently and persuasively.

Recent charettes have focused on off-campus interventions such as meeting the need for a community performance venue in Woonsocket, RI, where teams worked with NeighborWorks Blackstone River CDC in 2017, and designing a learning lab in the Rhode Island Historical Society’s historic, Federal-style Nelson W. Aldrich House in 2016.

“It’s a really effective way to build the brain muscles students will need to solve the unique architectural puzzles they’ll face in the future—wherever they land,” Debs says.

In the end, Infinite Reflections, a cozy space made all the more enchanting with cleverly placed mirrors and hanging ropes of light, emerged as the clear favorite in this year’s competition. In addition to collecting a $100 prize, each member of the team is excited that the carpenters who work in RISD Facilities intend to build their design in the coming months. “It really resonated with everyone,” says Department Head Liliane Wong, “maybe because this has been such a dark and rainy fall.”

A Charette of Historic Proportions

All undergraduate and graduate students in Interior Architecture threw themselves into an intensive design competition to reimagine a space for the RI Historical Society.

Interior Architecture sophomores redesign a group residence for men recovering from drug addiction and the hardships of homelessness.