Designing a School for the Arts

Students in an advanced architecture studio are exploring how highly specialized programming informs a building’s form and material character. 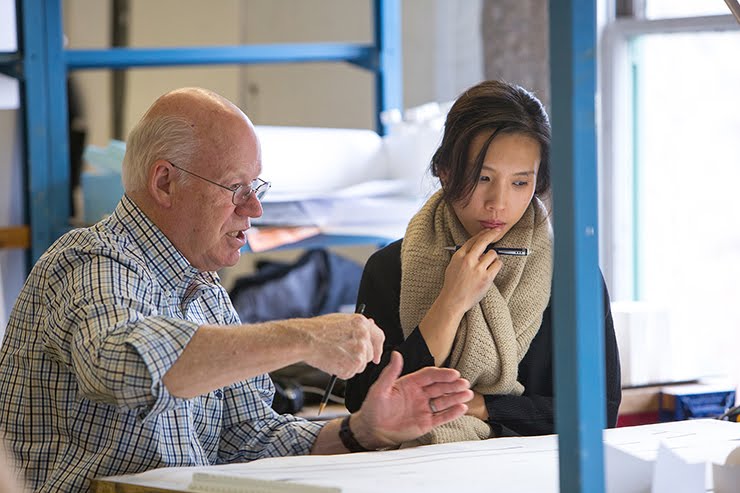 The idea of launching an arts high school affiliated with RISD has been in the air for decades, so when Architecture Professor Jim Barnes BArch 69 was thinking about a theme for his advanced fall studio, he decided to resurrect it. Given the Architecture department’s ongoing interest in engaging with young people in the community—for example, its partnership with Providence’s Lincoln School for girls—and Barnes’ long-term commitment to organizations like the ACE Mentoring program for architecture, construction and engineering, it was a suitable choice.

Each of the 10 undergraduate and graduate students enrolled in the class is designing a sustainable two- to three-story art and design high school that could theoretically be constructed along RISD’s riverfront on South Water Street or at the intersection of Wickenden and South Main streets.

The studio aims to provide students with a deep understanding of how highly specialized programming informs the exterior form of a building along with its material character. In addition, Barnes expects each design to be net zero energy efficient and, ideally, to relate aesthetically to existing buildings in the neighborhood.

“The buildings themselves are symbols of what a school should be,” Barnes explains. “We’re keeping the needs of an arts high school in mind as we design these spaces, balancing multiple, sometimes conflicting concerns like the need for natural light and an energy-efficient outer shell.”

All of the designs students are working on feature flexible classroom and studio spaces that would support various types of learning and making experiences as well as public exhibition spaces flooded with natural light. Michail Birman BArch 18 is developing a design that incorporates a central courtyard covered with a glass roof. “These panels would serve to diffuse the natural light coming in from above,” he explains, “and a glass façade facing the street would create a kind of sidewalk gallery.”

Birman wants to remain true to the spirit of the neighborhood by using timber framing and brick cladding. But he’s gathering case studies online to generate ideas about how to use the brick in unconventional ways.

Birman wants to remain true to the spirit of the neighborhood by using timber framing and brick cladding. But he’s gathering case studies online to generate ideas about how to use the brick in unconventional ways.

Grad student Amy Lungariello MArch 17 envisions a building that merges seamlessly with a small adjoining green space. “The lawn would actually move right up the sloped side of the building so it would literally become a part of the neighborhood,” she says.

The design Alice Zhen MArch 17 is working on features one entire level devoted to classrooms and another to studio spaces. The two levels are connected via four vertically oriented spaces: a gallery, an auditorium, a library and a fabrication studio. As Barnes reviews her drawings and compares them to her original model, he questions the direction she’s taking in the library design and offers some encouraging advice.

“The model captures your original idea,” he notes, “and you should stay true to that idea in the drawings. The big challenge is not to make these elements symmetrical. If you moved the center off center, you’d be so liberated. Be courageous!”

Students recently presented their ideas at a meeting of the Rhode Island High Performance Schools Summit and have been tapping into the expertise of Professor Paul Sproll, head of RISD’s department of Teaching + Learning in Art + Design (TLAD), along the way. “If such a school were actually created,” notes Barnes, “it could serve as a training ground for TLAD students – not unlike Rhode Island College’s lab school, Henry Barnard.” He looks forward to hearing Sproll’s feedback during final crits in December along with that of frequent guest critic Manuel Cordero-Alvarado, a member of the Rhode Island School Building Authority.

The Architecture department builds on its partnership with Providence’s Lincoln School, encouraging young women to engage with the built environment.