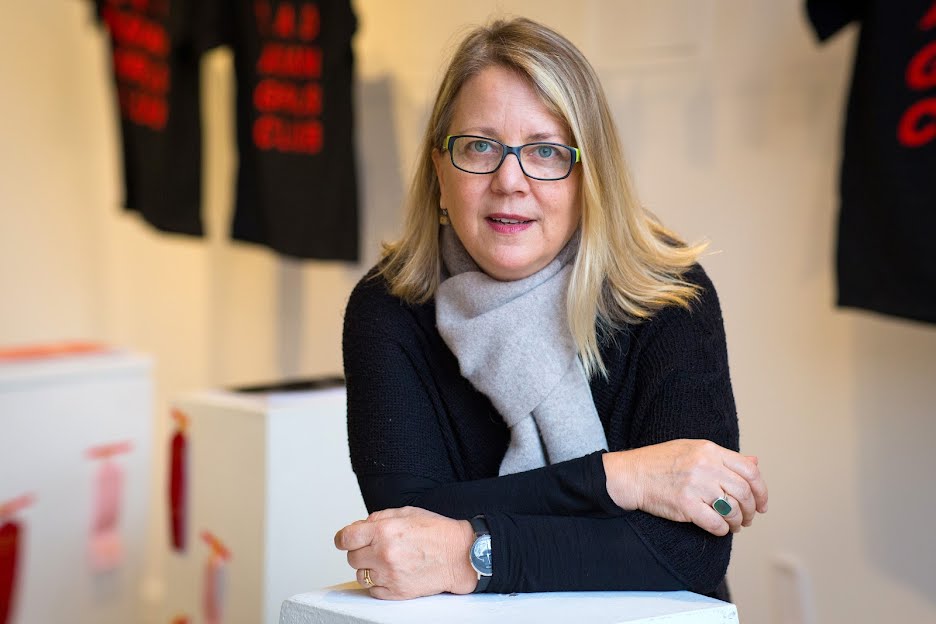 “Walt Whitman is always green in my mind,” says Professor Lucinda Hitchcock, head of the Graphic Design department. “The green-yellow-green gradient conjures a contemplative state, like lying in a field in mid summer looking through the grass and feeling the warm sun.”

Hitchcock is explaining the impetus behind her design for a digital message board that has been installed in approximately half of the Rhode Island Public Transportation Authority (RIPTA) buses as part of Rhode Island’s newly launched Poetry in Motion project. The Poetry Society of America began the program in New York City in 1992, and it has since spread to more than two dozen cities nationwide.

Rhode Island Poet Laureate Tina Cane grew up in Hell’s Kitchen and was profoundly impacted by a similar program in the NYC subway system. She hatched the plan to bring Poetry in Motion to Rhode Island, noting that, “Poetry is good for the spirit and the citizen alike. Our public transit system seems to me a most perfect and egalitarian vehicle to disseminate poetry throughout our state.”

With a new poem slated to be highlighted each month, Cane selected an excerpt from Whitman’s Song of Myself for the September 12 launch. She asked Hitchcock to design both the Poetry in Motion RI logo and the Whitman display.

“I designed the logo to suggest motion,” Hitchcock says, “and it also draws out the fact that within words are embedded other words and that language is elastic and playful.”

Hitchcock used the typeface GT Haptik for the logo and Calibre for the poem itself. “Calibre has the ability to shine when used in all caps (in small quantities) because of its sure-footed, nearly geometric and generous spirit,” notes the talented typo-phile. “It is clean without being antiseptic … contemporary, and yet it has enough character to differentiate itself from the ubiquitous Helvetica or Univers.”

The project has been garnering attention in local news media and was featured recently in The New York Times.

In July students participated in an intensive summer program investigating new ways of making poetic work in response to place.