Through a variety of projects, senior Olivia Park 17 GD uses graphic design to dismantle stereotypes and question the influence of technology on popular culture. 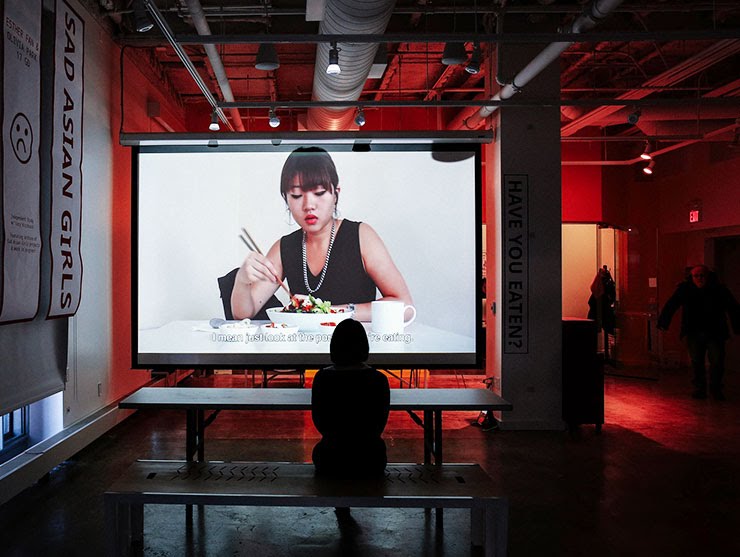 Through the ongoing Sad Asian Girls project, Olivia Park 17 GD is helping dismantle stereotypes about Asian women in the west.

Immersion in art and design began at a very young age for Olivia Park 17 GD. Born in NYC, she remembers walking through SoHo with her mother looking at art and then heading home to “draw whatever clothes I had on – or wished I had on.” Her interest in observing the world around her and focusing on fashion in particular continued when her family moved to the metro Atlanta area, where she discovered show catalogues and lookbooks – and with the growing prevalence of the internet, an expansive interest in online visual communication.

“The web magnifies your potential audience, which gives [designers] greater choice in who they communicate to,” says the senior, who chose to major in Graphic Design despite her early interest in fashion. “You show content to the world however you want people to perceive it.…That’s really exciting to me.”

At RISD the Korean-American artist loves the flexibility she has as a Graphic Design major to “experiment outside the traditional classroom,” finding that freedom essential to her growth as a designer. For instance, during her junior year that openness to investigation inspired Park and fellow Graphic Design students to create a media campaign for a “faux café” in Providence that generated a fair amount of buzz, along with a bit of controversy. By fabricating a brand identity for Lura – complete with a fictional chef “with a mustache and tattoos [who] rides a bicycle” – and spreading the word through social media, the designers were able to “have fun with the concept of deception,” says Park, eventually luring a crowd to a restaurant that didn’t exist. Ultimately, the idea was to critique a food culture driven in large part by imagery and hype.

In addition to Lura, Park has collaborated on a variety of other projects related to food and food culture, including the Cook Book zine she started with Somnath Bhatt 17 GD during sophomore year – “around finals week, a really bad time to do a side project,” she jokes – and her work with the student organization Global Initiative on the 2016 Eat the World festival.

Park’s interest in the relationship of food to culture and identity also inspired one of her most noteworthy projects to date. In a 2016 design studio, Professor Lucinda Hitchcock, who now heads the department, encouraged her and her friend Esther Fan 17 GD to reframe a project they were doing about Chinese food in the US as an inquiry into identity politics. The result – an ongoing project known as Sad Asian Girls (SAG) – makes use of the web, along with videos, zines and installations, to help dismantle cultural stereotypes about Asian women.

“By making art-activist work,” Fan and Park proclaim on the SAG site, “we aim to voice our lives as Asians in Western environments.” In the past year, the project has attracted attention from a range of media outlets including i-D, Nylon and PBS Newhour.

Whether she’s working on food-oriented projects or building on SAG, Park is committed to facilitating dialogue. “People love and live for stories,” she points out. “We talk because we want to hear stories, [and] storytelling comes in so many forms.” As she prepares to leave RISD this spring, continuing to find innovative ways to tell these stories is both the promise and the challenge of graphic design.