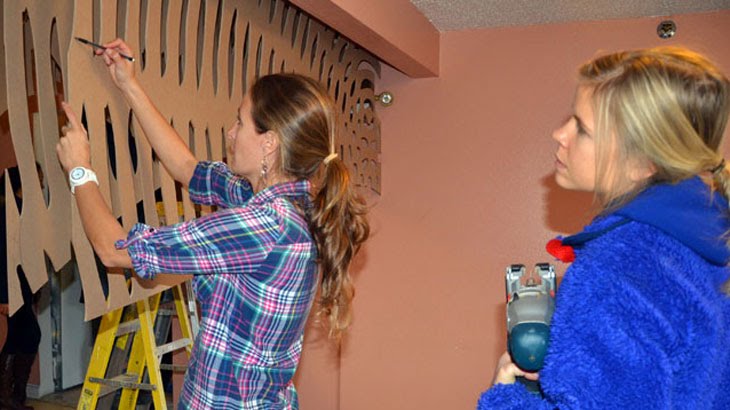 At the shelter run by Family Resources Community Action (FRCA) in Woonsocket, RI, six identical emergency apartments house four families in four bedrooms, with two shared bathrooms, a living room and an eat-in kitchen. The apartments offer an essential refuge for families struggling through the trauma of losing a home, but as with any homeless shelter, the living spaces are also reminders of that trauma: With so many families sharing a single apartment, parents and children need to coexist in cramped spaces, with little sense of ownership, space or privacy.

Earlier this fall 21 graduate students in theMaster of Interior Studies program in Interior Architecture used design to help mitigate that challenge in a studio project calledElements in Transitional Space. Theircustom-made creations, including artful privacy screens, multipurpose storage units and shelving made of revolving cubes, not only make the shelter apartments more user-friendly, they provide something less tangible – a feeling of comfort and home.

Professor Liliane Wong, who oversees the six-week studio project and is also head of Interior Architecture, says the students brought much-needed functionality to the shelter’s existing spaces, as well as a shot of inspiration. “They surprise me every year,” she noted in arecent feature story about the project in The Providence Journal. For instance, as part of getting to know the shelter and the community, students not only made site visits to assess the space and meet the families currently living there, they participated in a Saturday fundraising walk to raise awareness and support for the facility. “This was the first time RISD participated in the event, which has been held every year for the past 23,” Wong says.

Like many cities in the US, Woonsocket has seen a steady rise in home foreclosures since 2008, leading to an alarming spike in homelessness. RISD’s collaboration with the FRCA is part of a broad 2010 initiative Woonsocket launched to increase the capacity and effectiveness of existing shelters while also helping residents to avert foreclosure. Prior to the partnership with Woonsocket, Interior Architecture graduate students had designed furniture for the Pine Street Inn, a shelter for the homeless in Boston.

As part of the design project, students worked in teams of two to design and build such furnishings as an exposed closet with a clothes bar suspended between columns of shelves. The unit also includes a built-in child’s desk and stool. In one area, other students installed a large cubby unit with a paneled wall featuring an intricate perforated design.

But the most interesting design grew out of one of the first observations students made when they visited the shelter: No one seemed to want to use the living area. To make the living room space in one apartment more useful and inviting, students installed a large, angled work desk and backless chairs. Above it, they added a large, undulating wooden canopy of perforated organic forms to create an inviting learning nook that both kids and adults could use.

Reflecting on the feel of the new space,Lizzy Sall MDes 13summed up the feeling of satisfaction many of the students shared in completing their projects. “We’ve made a space in the living space that dignifies work” and encourages people to come together, she told theJournal. That’s a level of comfort homeless families too rarely get to feel.