As a summer intern at Weebly, graphic designer Zach Deocadiz 17 GD worked to connect the principles of print design to the world of tech. 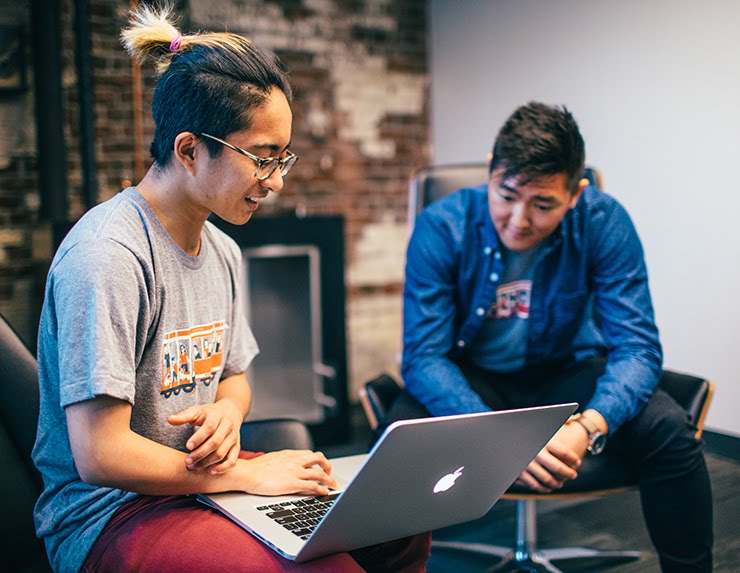 During a summer internship at Weebly, Zach Deocadiz 17 GD (left) tapped into the conceptual thinking and other processes he’s learned at RISD.

When Graphic Design major Zach Deocadiz 17 GD learned in June that his summer internship had suddenly fallen through, he kept his cool and used the connections he’d forged through RISD Careers to quickly craft a Plan B. “By the end of June,” he says, “I had three internship offers.” The one he accepted—with the web design firm Weebly in San Francisco—was based on an initial contact made at RISD’s Design Portfolio Review earlier in the year. “I’m really glad I ended up there,” he now says. “I learned a lot.”

Deocadiz had decided against a career in advertising after interning at an ad agency the previous summer, and he was eager to learn how the conceptual thinking and other skills he has learned at RISD could be applied to the tech world. “I was focusing on UI [User Interface] design this summer, but I was also figuring out what was applicable from my RISD background,” he explains. “Graphic designers have been exploring layout and typography for centuries, and that history isn’t generally acknowledged in the tech world. I’m interested in translating cool print techniques and postmodernism to the screen.”

In fact, Deocadiz is using some of the critical insights he gained through his Weebly internship to flesh out his senior thesis project this semester—one of the last hurdles before he graduates in December. “The way the tech world approaches design is sometimes limited,” he notes. “Everything has to be super clean and modern and attached to a regular grid. But there’s so much more that could be done.”

Crediting RISD professors and fellow students with pushing him to think outside the box, Deocadiz notes that he was particularly influenced by the History of Graphic Design class he took as a sophomore as well as Chris Novello’s Computer Utopias class. “Chris really challenged me to avoid existing design patterns or to at least manipulate them in new ways,” he says. “He taught me to think critically about where my work lives in the world and to see the implications of every project.”

And though it’s important to be clear when communicating as a graphic designer, Deocadiz believes it’s also important to push existing design parameters. Some of his favorite print techniques—like black-on-black printing—don’t translate to the screen, but others shine on the digital stage. “For example, colors can be far more vibrant with light behind them,” he notes, and unlike with printing, “you don’t have to pay for using more color, which gives you more freedom as a designer.”

A Hong Kong native, Deocadiz is hoping to land a job in the tech industry and stay in the US after graduation. “Design is starting to be more appreciated in Hong Kong,” he says, “but the best graphic design I’ve seen is happening here in the States. And there are so many exciting design opportunities in tech.”

Running with New Ideas at Reebok

A Summer of Art + Tech

Through a four-week internship at the Brooklyn experimental studio Eyebeam, Zak Ziebell BRDD 19 PT gained invaluable professional experience at the intersection of technology and fine art.