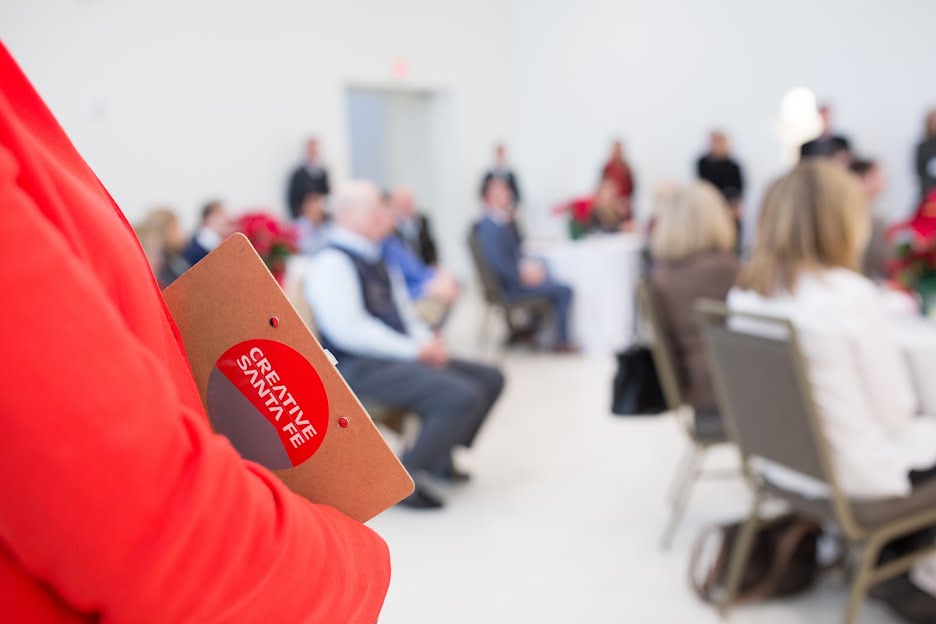 Yuki Murata MID 02 grew up hearing about how her father, Hiroshi Murata 64 PT – who met her mother, Nancy Silvia 64 PT, at RISD in the 1960s – would hide in the countryside outside of Tokyo during World War II air raids. He was four years old when the Allied forces dropped atomic bombs on the cities of Hiroshima and Nagasaki in 1945.

Now, the younger Murata lives and works less than an hour away from Los Alamos National Laboratories, where the atomic bomb was initially conceived and tested. As director of Design & Programs for Creative Santa Fe (CrSF), she felt an especially strong personal connection to the organization’s Nuclear Summit 2016, which was planned in conjunction with the disarmament organizations N Square and Nuclear Threat Initiative and took place during the first week of December as the first of its annual Disruptive Futures series of events.

The brainchild of Executive Director Cyndi Conn, Board Chair William Miller and fellow board member Joel Barber, the summit was one way CrSF is working to leverage design thinking and the collective expertise of the Santa Fe community to build a humanistic bridge between an ideologically diverse group of scientists, policy-makers and scholars. “We were trying to break down silos,” Murata says, because nuclear disarmament “is an environmental issue, a cyber issue, a political issue… it’s all of those things and more. So we need to figure out how to break down those walls to better address this issue.”

Toward this end, Industrial Design faculty member Tom Weis MID 08 and recent grad Brian Payne MID 16 joined Murata and others such as author-filmmaker Eric Schlosser and former US Secretary of Defense William Perry at the summit to discuss ways to break down barriers to progress. They led workshops designed to facilitate collaboration and establish new approaches to solving the problem of nuclear proliferation.

Prior to the conference, Weis – whose work with N Square informed a Wintersession studio he taught in 2016 – provided the nearly 50 participants with boxes in which they packed artifacts to “send into the future.” It’s an act that presupposes there will be a future despite the ongoing threat of nuclear weapons. This proved to be a component of the summit that people greatly appreciated, Weis reports, with many noting how their offerings represent “what they value and love” about the world we all share.

For Payne, whose research often focuses on the significance of objects, one goal was to encourage a largely serious cohort to “get weird” and push beyond “their comfort zone.” In one of the most liberating exercises at the summit, he and Weis asked participants to draw using a device made from perpendicular pieces of connected wood, which resulted in nuclear physicists and policymakers “drawing like children” – but also required close cooperation in order to commit ideas to paper. “We were really addressing process,” Payne points out, “and stressing the notion that ideas are fluid.”

Of course, cooperation didn’t automatically produce agreement, but the summit workshops and presentations did remind participants of a shared goal that too often gets lost in their sometimes diametrically opposed approaches. After all, proponents of total global disarmament and those still engaged in nuclear research all want to make the world safer – as do people all over the world affected by their work. “Ultimately,” says Murata, “Iranian parents want their children to be safe. Parents in Ohio want their children to be safe. How we go about ensuring that is the challenge.”

Feedback from summit participants was largely effective in highlighting the seriousness of its subject – that “the conversations that took place were about the end of civilization,” Murata says. She and CrSF now hope to make a book capturing participant interviews and featuring photography by Minesh Bacrania, a former experimental nuclear physicist at Los Alamos. Participants are also considering a follow-up event to continue the conversation and CrSF will take on other big issues as the Disruptive Futures series continues.

Most of all, Murata hopes Nuclear Summit 2016 resonated with participants on a very personal level. “In this convening, the first hat that I wore was my Creative Santa Fe hat, then my Santa Fe [resident] hat and then my Japanese-American hat,” she says. “But the one I wear above all is my human hat. And we all wear that – or at least we should. That’s why all this matters.”