Discussing the Art of Race

Artwork from the RISD Museum’s collection inspires frank conversations about race in America. 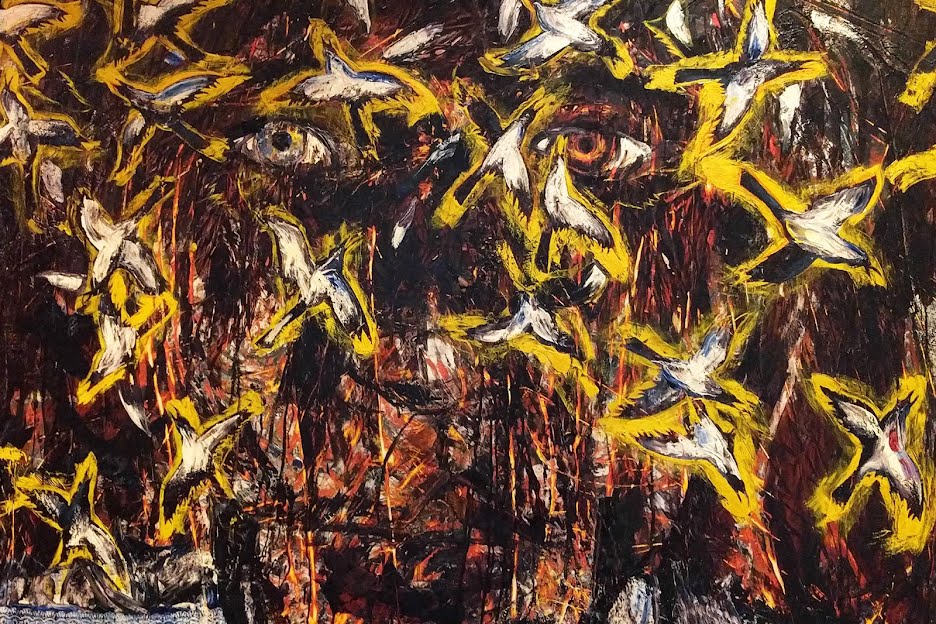 The Spirit of the Colony (1993) by painter Arnaldo Roche Rabell inspired the group to consider the way Puerto Ricans are often perceived on the mainland.

The Art of Race, an ongoing program organized by the Center for Reconciliation, welcomes members of the regional community to the RISD Museum every month to engage in frank conversations about race in America inspired by artwork in the museum’s collection. Facilitated by Program Director Elon Cook Lee—who is also a public historian and RISD Museum faculty fellow—this month’s discussion took place on Thursday evening, September 20 and tapped into the expertise of Richard Brown Baker Curator of Contemporary Art Dominic Molon.

Amid the raucous, family-friendly atmosphere of the museum’s Third Thursday open house, about a dozen participants—from a diverse array of backgrounds and ranging in age from 18 to 80-plus—prepared for a more sober experience in the Danforth Room. Lee immediately put the group at ease by encouraging everyone to examine the intentionally unidentified artworks she and Molon had brought along for the event. “Think about the emotions each piece inspires and ask yourself what each artist was trying to say in creating this work,” she urged.

The conversation began with speculation about a large, vertically oriented piece featuring a tiny photograph of a pre-adolescent black boy almost entirely covered in splattered black paint. “It looks like a shrine to the boy in the photo,” offered a young woman who introduced herself as a first-year student at RISD. “The dripping black paint brings to mind dripping blood, and makes me think of all the young black men who are getting shot.”

Other viewers described the piece using words like violence, pain and sadness. From there the conversation got more general. How do viewers’ racial backgrounds influence the way they see the work? What happens when white people offer interpretations of work by artists of color? Why is it that they are rarely expected to consider their own race?

Lee asked participants to think back to their first understanding of racial identity. An elderly black woman in the group recounted a moment from the 1950s that’s forever ingrained in her memory, when a white toddler at a grocery store pointed at her and gleefully shouted out the n-word. “I realized right away that his parents must have taught him that word,” she recalled.

As Lee explained, most kids begin to understand the concept of race between the ages of three and five—much younger, she pointed out, than the boy in the photograph. Molon then revealed that the piece, I Learned About Race Today, was created by African-American artist Andre Bradley MFA 15 PH as part of his thesis project at RISD. Then and now, he noted, black students and artists in general are often expected to make work focused on race—to convey their personal experience through their work.

One by one, other works were discussed, each offering a new entry point to keep the conversation going. The Spirit of the Colony (1993, top photo) by Puerto Rican painter Arnaldo Roche Rabell inspired the group to consider the “otherness” of Puerto Rico, a longtime US territory whose residents don’t enjoy the same rights as other Americans. Sculpture for Teenage Boys (Miller Six Pack) (1989) by white artists Robert Pruitt and Walter Jack Early features American iconography from the 1980s and led the group to consider which teenage boys, exactly, the artists had in mind. Molon read a statement from the artists explaining that the piece is intended as a “portrait of the enemy”—the high school bullies who had beaten them up when they were young.

In closing, the group turned its attention to a 2015 video installation called Face Value by African-American artist and Brown University Professor Tony Cokes and a simple but powerful piece by white abstract painter Sarah Morris. Focused on mass murderer George Hennard, it features a photo of his handsome, smiling face—a face that looks for all the world like it belongs to a friendly neighbor rather than a brutal killer full of hate.

Please register in advance if you’re interested in attending the next Art of Race discussion on Thursday, October 18 at 6 pm.

Photographer Nicole Buchanan 15 PH returns to RISD to talk about her compelling series now on view at the RISD Museum.