As a first-year student Nevin Dunn 20 IL is pushing his conceptual thinking to places he hadn’t yet imagined—and loving the challenge. 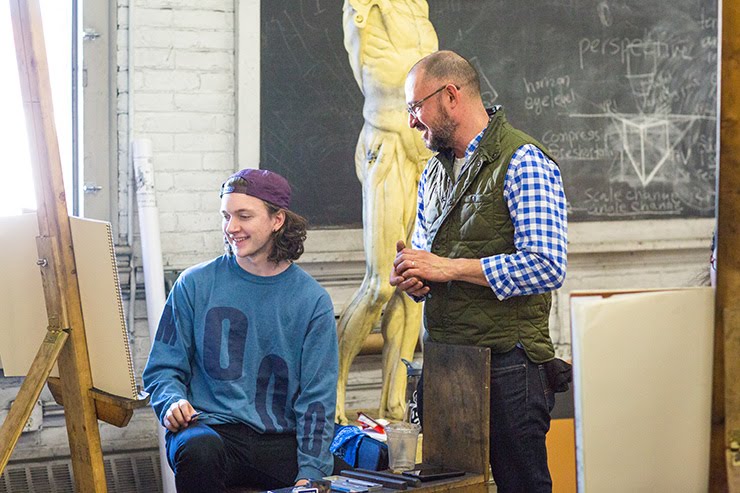 Like many aspiring artists of his generation, Nevin Dunn 20 IL honed his skills online. “I went to a public high school—400 kids [but only] one art teacher,” he says. So the Kansas native turned to YouTube and other web-based tutorials to supplement his learning about process and technique. This, combined with encouragement from that one teacher (whose energy defied the workload), gave him the confidence to pursue a college degree in fine art.

Now, as a first-year student in Experimental & Foundation Studies (EFS), Dunn is pushing his talents and conceptual thinking to places he hadn’t imagined—and loving the challenge of RISD’s rigorous studio and liberal arts education. “I’m very pro-RISD,” he laughs. “I’m a big fan.” He recalls visiting campus as a high school senior and touring the first-year drawing studios—“the ones I work in now”—and marveling at what he saw. “The student art was really impressive and it was just cool to see everyone drawing and actually being students.” In that moment, he could picture himself clearly in the same space, doing the same work. He was also excited to come to a more culturally diverse place than his hometown. “[Such diversity] creates such a necessary dynamic because it opens your mind to the world.”

From the outset, Dunn knew that studying art at RISD would be significantly more intense than what he was used to, but he was undaunted. “I was ready to jump in, and I think that helped me a lot because that’s what you need to do here—just dive straight into it.” Nonetheless, each element of the foundation curriculum has posed unique, though ultimately satisfying challenges. While he’s getting his first exposure to 3D making in his Spatial Dynamics studio, he says he has been equally tested in Drawing, despite being very familiar with the medium. “Drawing is intimidating because everyone here is so good and so intelligent.”

In addition to the work students make and present for critique, Dunn is incredibly inspired by the opportunities for intellectual growth he has already found at RISD. Of all his foundation studios, he has enjoyed the conceptual bent of Design the most so far, thanks in large part to his first-semester instructor, Nicholas Evans-Cato 94 PT. “Design is hard, my hardest class […] but the amount of progress I’ve made is visible. Nick is very intellectual and pushed me in good ways.”

Taken together, Dunn says, the three cores studios in EFS have given him an ideal introduction to RISD’s approach to critical thinking and making. “I’ve been exposed to such a diversity of work and developed so much conceptually—so much more than I thought I would. And that conceptual focus makes art so much more interesting.” He has also been pleasantly surprised by the intensity of the curriculum in Liberal Arts and the improvements he has seen in his writing—something he didn’t expect to gain from an education focused on art and design.

Moving forward, Dunn plans to major in Illustration, an impulse he was initially hesitant to follow, noting that “with my drawing background, it felt like the easy way out.” But over the winter he began to think more about the interdisciplinary potential of the discipline. “I’ve felt like I want to major in so many different things, but I think that Illustration is [a way] to satisfy that [desire].”

As for where he wants to go with everything he’s learning at RISD, Dunn is taking the possibilities as they come. “I trust RISD and the Illustration major to take me where I want to be. I just want to find what suits me best while I’m here—and pursue it.”

Students in an intense Wintersession studio (re)discover the essential power of drawing.