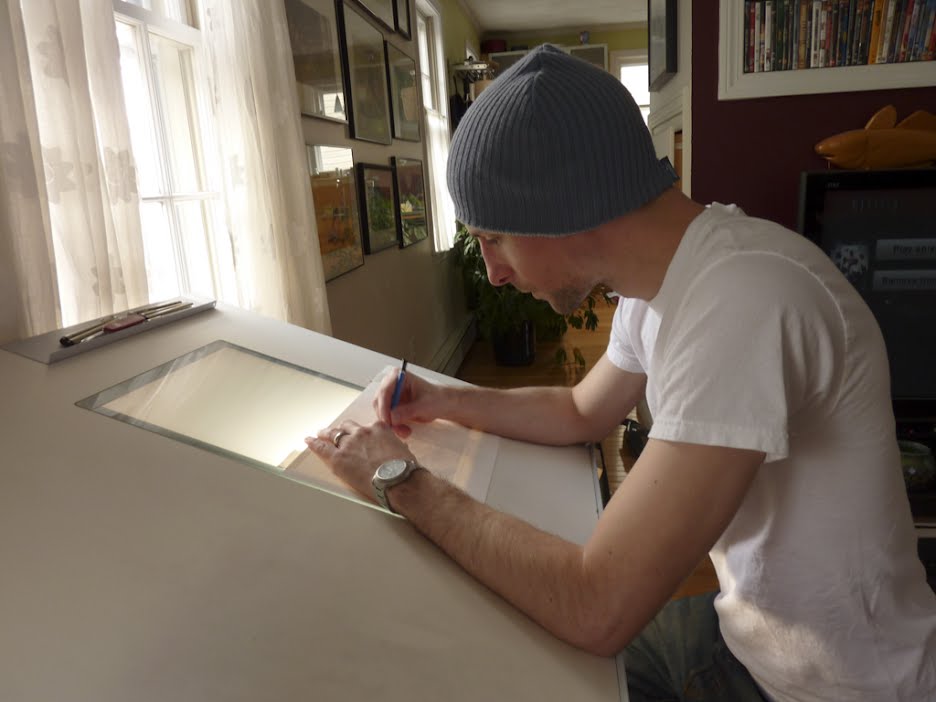 With his first graphic novel, longtime Illustration faculty member Antoine Revoy 99 FAV synthesizes cross-cultural childhood influences and his personal journey to date. Born in Paris, the artist spent his formative years in Tokyo before coming to the US in 1995 to study at RISD. ANIMUS (2018, First Second Books) draws on diverse styles from European, Japanese and American comics to weave a tantalizing ghost story for young readers and adults.

“The story is inspired by my childhood in Japan and the folktales I read,” says Revoy, “and the style and atmosphere grew out of months and months of sketching. My inking and drawing sensibility come from Japanese Manga, but the pacing and storytelling are more from bande dessinées [or BDs in France and Belgium, where the comics tradition runs strong].”

Revoy wrote the story in his head in Japanese before translating it into English on paper, creating the original thumbnails reading from right to left as in Japanese. “They’re Japanese characters so I hear them speaking Japanese in my head,” he explains. “Creating natural-sounding dialogue in English was a bit tricky.”

Released in May, ANIMUS is already garnering strong reviews. Kirkus Reviews describes it as “an eerie… mystery that is bewildering and unnerving in the best way possible.” And Paste Magazine says, “Revoy’s work unveils complex shades of Moebius and old-school Manga, yet holds a precision and clarity that transcends borders.”

Given his teaching schedule and thriving freelance practice, it took Revoy about two years to produce the book, painstakingly drawing in pencil on Bristol paper and then inking his images with nib pens dipped in black India ink. He added the text last, using digital type in order to build another visual layer.

All the while, Revoy was teaching his popular courses in sequential art, narrative and pen and ink—studios current students crave. “Teaching helps every other aspect of life,” he notes. “It’s important for me to get out of my studio and see what other people are working on—to stop obsessing about my own projects.”

When he was a student at RISD in the mid 1990s, Revoy majored in Film/Animation/Video and believes that the painstaking traditional animation work he did during his junior and senior years still comes through in his craftsmanship as an illustrator. Professors Tom Mills, Gareth Jones and Fred Lynch 86 IL proved to be key to his creative development, but he also credits the RISD community as a whole for pushing him forward and helping to shape his style.

“RISD draws interesting, creative people,” Revoy explains, “and it’s hard to predict the kinds of learning and collaboration that happen when you put people like that together in one space. It’s not something you can get from online tutorials. I had a lot of breakthroughs as a student and was exposed to things I never knew I would be interested in.”

As a teacher, Revoy inspires students using an approach he first encountered during his Foundation year in a 3D design studio taught by Jones. Rather than dividing the semester into project deliverables or skill sets, he explains, Jones segmented the course into distinct sections that introduced students to the various qualities of three-dimensionality one at a time: first plasticity, then rigidity and finally elasticity.

“When teaching fundamentals, it’s very effective to think about the essential properties of the physical world,” says Revoy, “and you can apply that philosophy to whatever you’re teaching.” Working in a 2D medium like illustration, he goes on to explain, the essential formal properties are the manipulation of time, visual clarity, rhythm and contrast. “Those elements really form your language as an illustrator.”

Although Revoy will teach a full course load this fall, he will also continue to make time for his own work. He’s already drafting several new stories for a follow-up graphic novel, though it won’t be a sequel to ANIMUS. “I am considering doing another scary story, but the location and the characters will be completely different,” he explains, adding that, “drawing comics is incredibly time-consuming, but a real love of the genre keeps me going.”