Exploring the Brilliance of Cuba 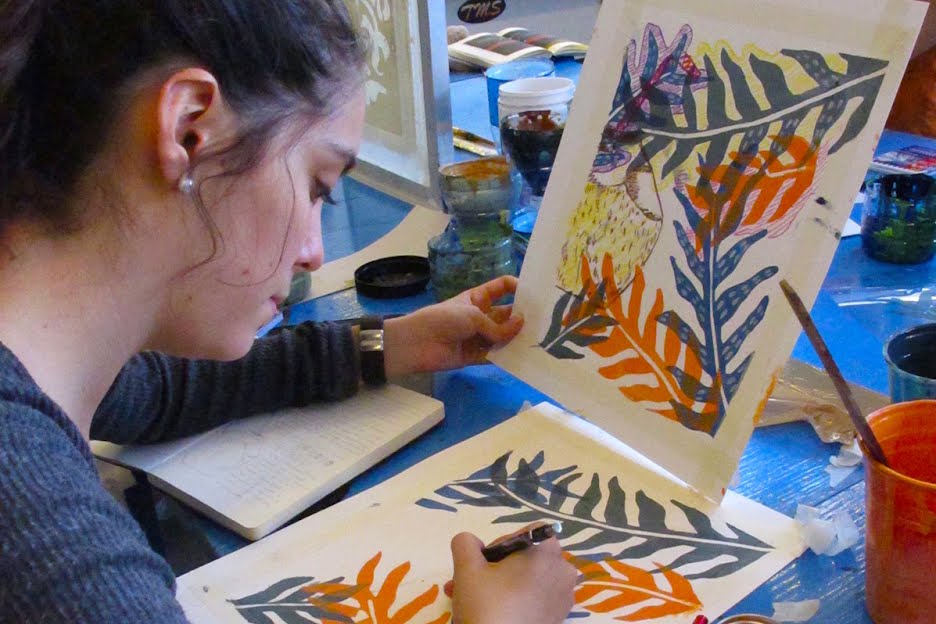 Cuba was awash in color, noise, sunshine and tourists in January as 16 RISD students explored its museums, workshops and galleries during a month-long Wintersession travel/study course.

“The studio component of the class was our focus, so we weren’t able to travel as much as during previous visits,” says Winifred Lambrecht, a faculty member in History, Philosophy + the Social Sciences who co-led the course with Professor Henry Ferreira MFA 80 PR, head of RISD’s Printmaking department. “But Havana itself is a treasure trove. You could spend six months there alone.”

The group visited the much smaller city of Trinidad but worked largely in Havana, where Ferreira (below, far right) collaborated with professors at the Instituto Superior de Arte and taught a weeklong workshop on mono-printing. “Material-wise they have nothing,” the professor says. “I brought two 70-pound suitcases full of emulsion, inks, screens, frames … everything.”

Of course, the Cubans’ “incredible resourcefulness in the face of adversity,” Lambrecht adds, is part of what makes their artwork so extraordinary. “They make amazing art out of recycled cardboard and dead leaves!” she exclaims.

Cuban-American sophomore Megan Molina 19 IL was equally astonished by the sights and sounds of Cuba and thrilled to connect with family she’d never met. “The country has changed so much since my grandparents emigrated after the revolution,” she says. “It is breathtakingly beautiful. And the artists take real risks with the political statements they’re making.”

Molina and her classmates attempted to capture the whirlwind of lectures, gallery visits and beach excursions in their journals and sketchbooks, with the colors of the island clearly infiltrating their palettes.

For many, the highlight was a last-night visit to the much-anticipated Fábrica de Arte Cubano (FAC), a massive complex of studios, galleries, workshops, restaurants and bars created for and by Cuban artists. “It was a fantastic closing for the course,” says Lambrecht. “Students were in heaven!”

Students in a Wintersession travel course in Italy showed off shoe designs inspired by Italian craftsmanship at the RISD Library.

In July students participated in an intensive summer program investigating new ways of making poetic work in response to place.

Project Open Door teams up with Hasbro to provide area teens with an intensive, all-virtual toy and game design workshop.