During a winter residency at Wave Hill, Ashton Agbomenou 14 FAV began a series of portraits informed by fellow African Americans living in Harlem. 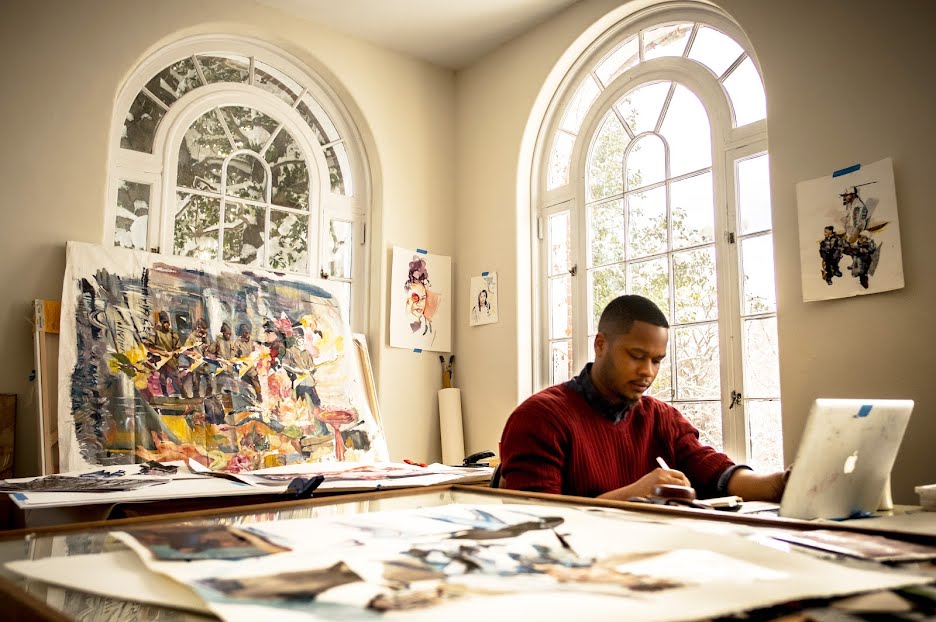 Growing up in Harlem as a first-generation American, Ashton Agbomenou 14 FAV watched helplessly as gentrification transformed his neighborhood, pushing people of color further and further into the margins. And with each new incidence of police brutality—coupled with signs of growing racial and economic inequality—the vision of America that inspired his parents to leave their home in Benin, West Africa seemed to grow dimmer.

In late 2017, when President Trump made his infamous remark about immigrants from “shithole countries” in Africa, it was as if a switch flipped inside Agbomenou. “I felt like I needed to respond to this crazy narrative,” he explains. “I wanted to create a series of portraits exploring and celebrating the faces of the African diaspora that would also preserve the cultures of these communities.”

After winning support from the New York Community Trust Van Lier Fellowship, Agbomenou began doing just that during a residency he recently completed at Wave Hill in the Bronx. In February and March he took advantage of free studio space at the cultural center’s bucolic setting—about a two-hour train ride from his current home in the Bed-Stuy neighborhood in Brooklyn—to conduct research and begin working on his new portrait series.

“The most important thing for me was the quiet space,” says Agbomenou. “Looking back at the work I had been doing since leaving RISD—as an artist’s assistant and as a production assistant in the film world—I realized that it wasn’t pointed in any specific direction. Wave Hill gave me the space to meditate on how to move forward.”

Agbomenou’s initial plan was to interview black residents of Harlem about both their changing neighborhood and their sense of their own place in society. “In the early stages, I was reading The Image of the Black in Western Art and was amazed by how limited the black presence is in art history,” he recalls. “I wanted to introduce images of black people into art history—to play some small part in the evolution of western art.”

What actually emerged from those early interviews is two distinct experiences of America: one from African immigrants and their children and another from African Americans whose families have lived in the US for generations. “There is real conflict between the two black communities,” says Agbomenou. “I was reading Isabel Wilkerson’s book about the Great Migration [The Warmth of Other Suns] on my train rides to and from Wave Hill, and it was clear that African Americans had faced similar oppressive forces when they first moved to New York from the South. I wondered how a portrait series might help these groups feel more connected.”

Agbomenou has since been approaching strangers on the streets of Harlem with renewed vigor, photographing them and recording their conversations. Back in the studio, he paints their portraits in oils or watercolors and creates layered collages using his own photographs and pages torn from fashion magazines representing “relics of downtown society.”

At the same time, Agbomenou is working on commissioned portraits in order to fund a new studio space and continuing to assist thriving NYC artists Simone Leigh and Chitra Ganesh, both of whom he met while they were teaching at RISD. And although he isn’t currently pursuing any film projects, he believes that majoring in Film/Animation/Video has made a lasting impact on his sequential approach to narratives and how he prefers to exhibit his paintings.

Beyond the notorious workload, Agbomenou notes that studying at RISD presented other challenges. “Providence was a kind of retreat from the hectic pace of Harlem,” he says, “but navigating between the two realities was difficult.” He relied on support from mentors like Tony Johnson 93 SC, now RISD’s assistant dean of students, and Assistant Professor Andrew Freiband 97 FAV, who, he says, “understood the culture shock” he was facing and encouraged him to connect more with peers.

“The most valuable thing I got from RISD,” Agbomenou concludes, “was being part of such a diverse creative community. Although you’re ultimately accountable for the work you produce, your peers act as your guides, and we were there for one another. We felt that sense of kinship.”

As part of his Van Lier Fellowship, Agbomenou will exhibit the portrait series he’s working on in Wave Hill’s Sunroom Gallery from September 23 through October 27.