Work by artist/educators Daniel Heyman and Serena Perrone MFA 06 PR is now included in the permanent collection at the Metropolitan Museum of Art in NYC. 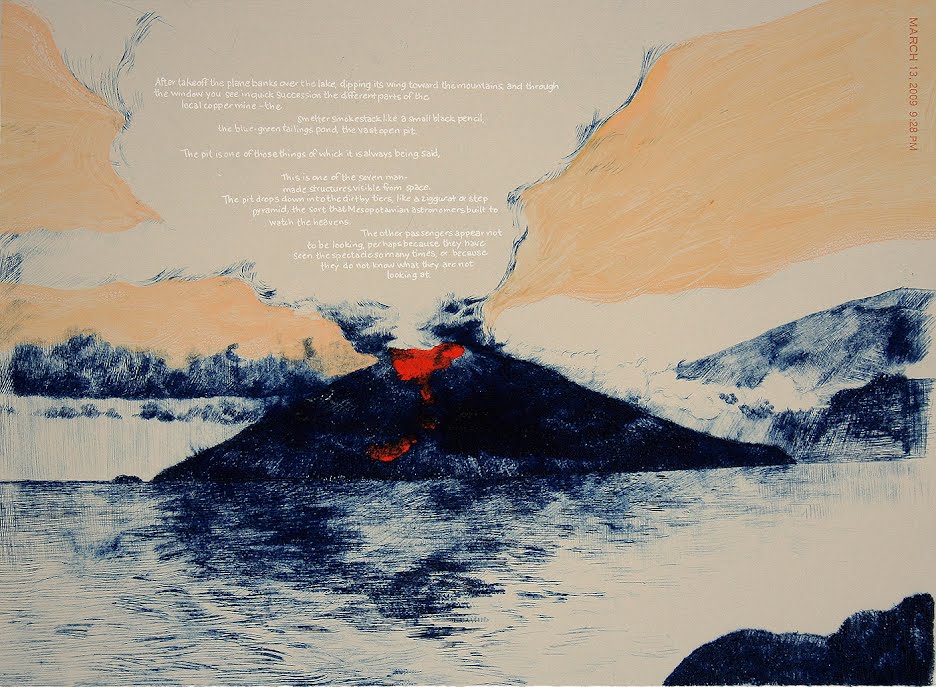 A recent series of prints by Illustration faculty member and alumna Serena Perrone MFA 06 PR is now part of the permanent collect at the Metropolitan Museum of Art in NYC.

After focusing his work for several years on the war in Iraq, Heyman created Fall: Artist Eats Pho in 2011 using 12 copper plates and nine sheets of cotton. As the second in a four-part series of self-portraits, it represents him eating a bowl of Vietnamese pho noodle soup in south Philadelphia. Meanwhile, the Vietnamese immigrant Hung Nguyen recounts the story of his early life in Vietnam and immigration to the US. But “the artist is adolescent in his ignorance of those around him,” Heyman says of himself, “focusing instead on the satisfaction of his physical needs.”

In her more outward-facing series of 20 prints, Perrone took inspiration from the late poet Craig Arnold, who died in 2009 while researching volcanoes in Japan. “These images of active volcanoes located in Italy, Peru, Colombia, Nicaragua, Guatemala, Mexico and Japan are paired with fragments of text culled from Arnold’s travel blog in the days leading up to his death,” Perrone says. They move geographically from Italy to Japan and chronologically through time, revealing the brilliant reds and dark indigos of the last landscapes to inspire the award-winning poet.

“These days you are low on self-responsibility,” Arnold wrote on April 18, 2009—nine days before he was last seen on the island of Kuchinoerabujima. “Only last month Asamayama erupted, throwing lava bombs a kilometer from the crater.… Climbing it now would be, as with so many of your plans,” he writes about himself, “a bad idea. This does not make it seem any less attractive. Whatever holds you back, it is not self-responsibility.”

In following Arnold’s quest in spirit, Perrone created the images using intaglio plates printed with gouache monotype on a Takach etching press. She silkscreened on top and then hand-set the type using a Vandercook letterpress. The project was conceived during her residency at the Vermont Studio Center in July 2010 and executed while she was an artist-in-residence at All Along Press in St. Louis the following September.

Perrone says she recognized her own quest for connection in Arnold’s words—“primarily in his thoughts on home and distance, the foreign and the familiar and that longing that seemed ever present in his work.” Much of her work reflects a similar examination of what she calls “liminal space”—the margin between what is known and what is unknown. She also aims to “reflect on personal mythologies, examine differing forms of nostalgia and recount stories of destruction, regeneration, transition, enchantment and disenchantment.”

Perrone is teaching Printmaking Techniques for Illustrators at RISD this semester and also teaches printmaking and drawing at Pratt's upstate campus in Utica, NY. She was nominated for a Pew Fellowship in 2017 and has received grants from the Pollock-Krasner Foundation, the Santo Foundation, the William J. Cooper Foundation and the Vermont Studio Center.

Heyman is currently teaching Japanese Papermaking and Relief at RISD and looking forward to co-teaching a Wintersession course in Japan (with art historian and Japanese woodblock print specialist Elena Varshavskaya) called Papers, Temples and Print. Students enrolled in the class will work side by side with some of the finest Japanese paper makers working today. He is the recipient of a Pew Fellowship as well as a Guggenheim Fellowship in the Arts. Both artists are represented by Cade Tompkins Projects in Providence.

In Their Own Words

A recent series of woodcut portraits by Daniel Heyman, a Senior Critic in Printmaking, is highlighted in the current issue of the Princeton Alumni Weekly.