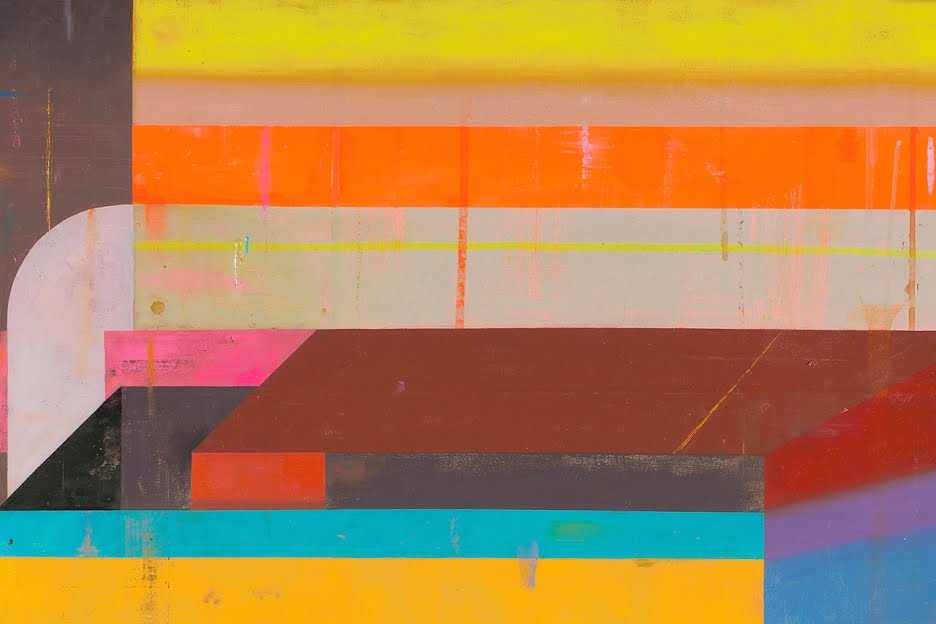 Bewitched (detail, 2017, oil on canvas) is among the paintings by Associate Professor Deborah Zlotsky that helped earn her a second fellowship from NYSCA/NYFA.

Two New York-based painters with RISD connections have earned 2018 NYSCA/NYFA Artist Fellowships from the New York Foundation for the Arts (NYFA). For Deborah Zlotsky, an associate professor in Experimental and Foundation Studies who’s based in Albany, it’s the second time she has been awarded the fellowship in the past six years. For artist, writer and educator Julian Kreimer MFA 03 PT, the welcomed recognition from the New York State Council on the Arts (NYSCA) and NYFA is a first.

An associate professor at SUNY Purchase, Kreimer has completed residencies at Yaddo, the MacDowell Colony and most recently Hotel Pupik in Scheiffling, Austria, where he exhibited in 2017. The Brooklyn-based artist also writes art criticism, profiles and reviews, and is a frequent contributor to Art in America.

The NYSCA/NYFA Artist Fellowship Program makes unrestricted cash grants of $7,000 to artists working in 15 disciplines within the categories of Painting, Fiction, Folk/Traditional Arts, Interdisciplinary Work and Video/Film. A highly competitive program, it relies on discipline-specific peer panels to review all applications and select recipients, with this year’s 89 finalists culled from a pool of 3,071 applicants.

“Artists deepen humanity and help us to understand the world and each other through their work,” says Michael L. Royce, NYFA’s executive director. “We recognize that at the heart of the arts is the individual artist,” adds Mara Manus, his counterpart at NYSCA. “These grants provide artists in a multitude of disciplines with financial support so they can take risks and flourish in their work, fueling the creative capital of New York.

Represented by Markel Fine Arts in New York and Robischon Gallery in Denver, Zlotsky is “interested in how a cycle of construction, accumulation, rupture and repair creates a complicated system,” she says of her paintings. “As I work, I follow detours and choose contingencies within a syntax of shapes, stripes, planes, the static of paint drips, abrasions and stains,” she explains. In addition, wonderful trompe l’oeil elements “act like small prosthetics within the pictorial space.”

Critic Carmen Machado, author of Her Body and Other Parties: Stories, sees Zlotsky’s paintings as “a convergence of Renaissance images and pop art, of the past and present, of science fiction and reality, of physicality and illusion.”

In an interview in Painting Perceptions, Kreimer recalls that his first day in studio at RISD was on September 11, 2001—an inauspicious beginning that led to a semester full of frustrating work creating “these big door-sized paintings” that left “no air in the room.”

After hitting a wall at crit, he remembers watching Louis Malle’s groundbreaking film My Dinner with Andre—repeatedly. “It made so much sense to me that you could make a film about something so mundane as a dinner,” Kreimer explains. “But it was also transformative. That movie opened me up and allowed me to go back to observation.”

By the end of his first year at RISD, Kreimer was working outdoors again, painting “in the overgrown, weed-filled backyard” of his rental house in Providence. The painting of his old Honda Civic as seen through the weeds in his backyard ended up being the breakthrough he needed that year. And, he adds: “I’ve been making versions of that painting ever since.”

Processing the Possibilities of Contemporary Art

In a new spring graduate seminar and lecture series, students and members of the RISD community considered the complexities of making meaningful art of the moment.