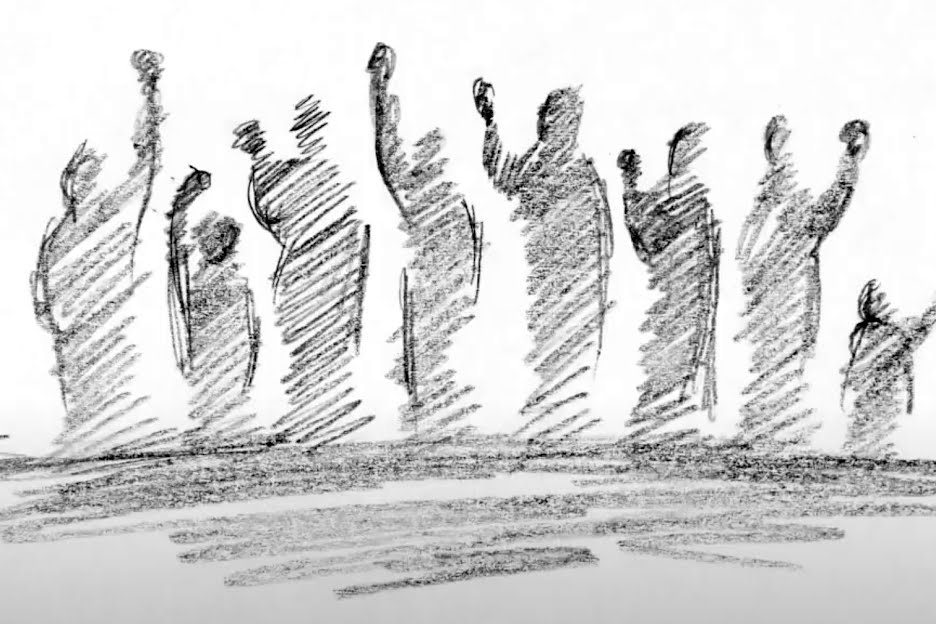 Dreamcentered, a short film by Maia Buljeta 22 FAV and Kaija Harrison 21 FAV, focuses on experiences of young refugees—both before and after leaving their home countries.

Just weeks before leaving campus due to the pandemic, students who participated in a fall Film/Animation/Video (FAV) studio presented animated shorts at the Providence Children’s Film Festival (PCFF), exploring a complex global issue through a local lens.

Made in small groups with youth involved in Providence’s Refugee Dream Center, the five films emerged out of Community Collaboration: Animation in Providence, a class developed and led by Associate Professor Max Porter 03 FAV. Students used the medium as a platform for social engagement and cross-community connection, working with young refugees to creat a wide range of work—from motion comics and music videos to a VR game.

In making the short documentary Dreamcentered, Maia Buljeta 22 FAV and Kaija Harrison 21 FAV used illustrations by four youth group members as the basis for exploring their complex relationships to the idea of home.

Against gently undulating line drawings, the teens consider new opportunities and reflect on family members and ways of life they have left behind. The short experimental piece shows how FAV students were able to project and elevate the voices of refugee collaborators.

Buljeta, who loves making documentaries because they let her “step into people’s worlds and learn their stories,” says that one of the best parts of making Dreamcentered was the opportunity to hear about the RDC youths’ “dreams, their comfort foods, who they had to leave and who they miss.”

Calling the experience “fun and touching,” Harrison says that, like Buljeta, she began making animated films years ago while being homeschooled—she in Chepachet, RI and Buljeta in NYC. For this project, both enjoyed hearing their teammates’ stories of distant homes—stories that made the challenge of shaping and editing the film very difficult.

According to Buljeta, the most important thing uniting everyone participating in the project was a belief that people can create community simply by supporting and believing in one another. And though the pandemic has made some of the most rewarding parts of their community collaboration—“the hugs and high-fives and putting your hands together in a circle”—impossible, her belief in filmmaking as a meaningful mode of expression is as strong as ever.

“Film is a device for communication and a platform for change,” says Buljeta. “These experiences have really reaffirmed that for me.”

In the face of the COVID-19 crisis, Film/Animation/Video students and faculty are embracing the department’s core values.